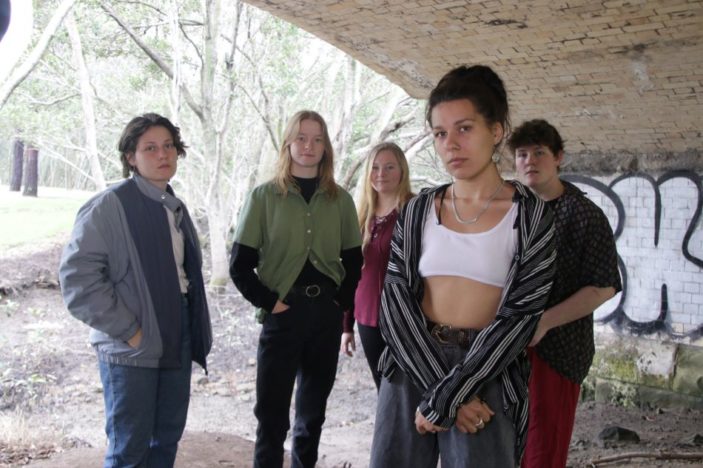 Subtle Mullets are a five-piece band from the Inner West of Sydney. They are all self-taught musicians, and with the band starting in high school, they pride themselves on being a queer band. This week they release their debut album, Burns Still. We are thrilled to be premiering the album, ahead of its release tomorrow, 29th October 2021.

Subtle Mullets is comprised of Jessie Waratah on vocals, Adelaide Hayes on guitar and vocals, Evelyn Hayes on lead guitar, Hannah Cazar on bass and Miriam Sands on drums. A couple of tracks on the album have already hit the airwaves in recent months. The power-pop anthem “Her(e)” expanded their audience, and the latest single “Miss You Sober” has a bittersweet melancholy to it.

Burns Still is a captivating album. Beautifully varied, grunge with strong melodies, riffing guitars, driving beats,  telling tales of loss, love and everything in between. It’s a stellar album and an outstanding debut from Subtle Mullets.

About recording the album Miriam stated: “When we arrived at the studio to record our first album, we didn’t truly expect or anticipate what was about to happen or the experience we were about to share together. Over the course of the recording we experienced a lot of different emotions within the studio. Mostly a sense of excitement, nervousness and a driving adrenaline to create something really special to us. The final outcome of the album definitely holds all of the emotions, intensity and enthusiasm that was felt within the atmosphere of the studio. Through the undertoning charge of production and recording we were able to create something really raw, unique and distinct to us and our identity as a band. This album is so special to us and we are so proud of what we were able to
produce together!”

Do enjoy our first listen ahead of its release tomorrow.  You can pre-save it HERE