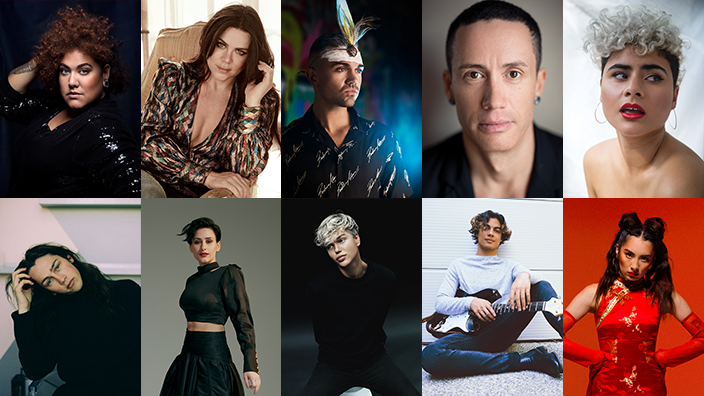 Last year, Kate Miller-Heidke took out the competition with her gravity defying song titled, well… “Zero Gravity”. Now, it’s that time of the year again – to choose who will represent Australia in this year’s Eurovision 2020. The 65th campiest, wardrobe malfunction prone music competition will take place in Rotterdam, Netherlands this year.

That’s right, the Hottest 100 has been and gone. But if you felt your votes fell through you can still vote for your favourite artists in the next Eurovision: Australia Decides.

Those on the Gold Coast will have the chance to buy tickets and see it all unfold live, while the rest of us will have to settle in for the live broadcast happening on the 8th of Feb on SBS.

But who will be the talented Aussie to represent all of Australia on stage this year? There are ten finalists that will be singing their hearts out next Saturday, and the AU have a few theories on who will win.

Jack Vidgen who rose to fame through the fifth season of Australia’s Got Talent, is determined to do it again along the trail to Eurovision. After taking a long hiatus due to online bullying and even death threats, his song “I Am King, I Am Queen” champions the message that it’s okay to rise up again after you fall.

Household name Casey Donovan has also thrown her hat in the ring this time. “Proud”, (queue dramatic violins), celebrates Donovan’s amazing vocals. There are no double meanings here. Donovan herself says she fell in love with the song and its simple but true reminder to stand tall and proud.

Up-and-comer Jordan-Ravi is going for a different tack. If Eurovision has taught us anything sometimes a simple, upbeat, poppy ballad can take you to the top. “Pushing Stars” goes for exactly that. We can expect fake acoustic guitar playing on stage.

Mitch Tambo started his journey with a self-released album Guurrama-Li. “Together” much like many Eurovision entrants is slow-building and uplifting. However, much like many of his own works it celebrates his Indigenous culture too.

Jaguar Jonze moves away from both the poppy upbeat options or the long ballads and goes for a groovy, James Bond-esque tune with her tune “Rabbit Hole”.

Not nearly as tantalising, but certainly as astounding, Vanessa Amorosi pairs her pipes with the keys for her hit previously released in 2019, “Lessons Of Love”.

iOTA has had a long career in music spanning many different genres as his music experiments and matures. His song, “Life”, contrasts upbeat keys against bittersweet lyrics and perhaps is the most political song of the contestants this year.

Diana Rouvas, another alumni and former winner of The Voice, comes in strong with “Can We Make Heaven”. Easily the perfect sampler for an EDM banger, the song wastes no time to show off Rouvas’ vocal range.

Celebrating the incredibly diverse line-up of contenders this year, a further two entries were announced last month. Montaigne, hailing from Sydney, already has two studio albums under her belt at just 24. Like Montaigne, Didirri is another young and unique voice. However, unlike Montaigne’s poppy bangers and manic energy, Didirri has a quiet but powerful sound like the waters of Warrnambool where he grew up.

No doubt, the votes will be neck and neck next week. While each song carries its own unique powerful message our guess is it will be a close call between Casey Donovan and Jack Vidgen. Donovan has her star power and unquestionable talent backing her up, but Vidgen’s reprisal of his career might just be the push he needs to catapult him to the top.

In saying that, we really won’t know until we see their stage performances. Only last year, Kate Miller-Heidke’s incredible Cirque Du Soleil-esque performance coupled with her operatic aria made her the darling of Australia. The stage performance could make or break any one of these six talented singer’s chances.

So, we won’t know until the big night, 8th of February 2020. Don’t forget, you can be a part of the magic by purchasing a ticket below or tune in to the live show on SBS. No matter what happens next, it will be a show to remember for Eurovision 2020: Australia Decides. With some exciting special guests as well. Who will you vote for?

You can purchase tickets to the live show HERE