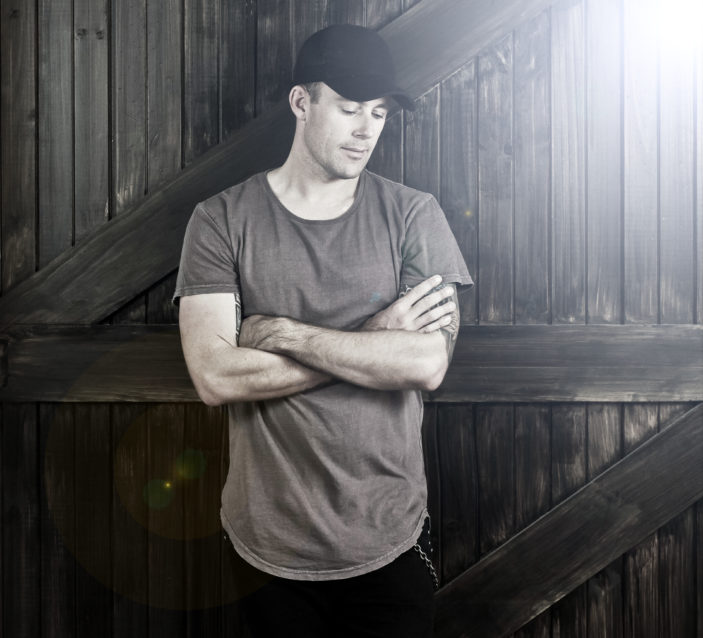 Casey Barnes is one of Australia’s most prominent country music artists. The father of two had had an impressive career already, having played alongside Mariah Carey, Bryan Adams and just recently, Lady Antebellum. He recently released his third album, Live as One, along with the single of the same name – an important song about global acceptance, unity and understanding.

It’s been four years since your last release. Why did Live As One take so long to make?

It’s been a fairly long time coming, but I’m excited that I’ve finally got it out. It was a combination of getting the right tracks together and I made a lot of trips across to Nashville. That’s why it was a drawn out process, just to make sure we had the strongest tracks. I’m now signed with Social Family Records, so that’s made a massive difference to the success of this album and it’s the first time we charted at #9 on the ARIA album charts on the first week of it’s release, which I’ve never done that before – so that was really exciting!

Your wife sings with you on the album. What was it like singing with her?

We’ve been singing together for years. It’s awesome to have her on the album. She features on three songs, but she’s also singing backing vocals on a lot of tracks as well.

Do your daughters also sing?

Yeah, they do. They’ve both got an interest in music and they love the fact that they’ve both been in a few of my videos. There’s one track on the album called “Valentine”, and our little girl Charlie and her friend Moss, [are] the two main characters in this music video. We’re already talking about my next single and she keeps [asking] if she’s going to be in the video again.

Good question. The country music scene – it’s got such a loyal fan base. There’s such a good vibe every time you do a festival or a gig. There’s no competition between other acts, it’s just everyone’s got each others back and everyone’s supporting one another. I have always had a soft spot for country music and, when I say ‘country music’ – I think, these days, country music is the broadest genre of music there is.

If you listen to country music in America, far out, it can go from one spectrum – which is right out there, sounding like pop music back to the really old traditional country music and then everything in between! Stuff I write and record falls into a few different aspects of country. I enjoy writing stuff with a bit of a blues sort of vibe and I grew up listening to all of that music when I was a kid.

My philosophy on country music is if you can’t find an artist you like then you’re not looking hard enough!

There’s a stigma in Australia [and] Australians need to get over it. They’re probably thinking of old school country music that maybe they didn’t personally like, but it’s changed so much now – there’s such a variety of stuff! Personally, I’m never going to be one of those country artists that sings about pick up trucks and whisky – I’m not that sort of guy because I don’t connect to that.  I’ve found my niche storytelling and life experiences that I can sing and relate to.

Are storytelling and life experiences then what you think defines country music?

Yeah, I think so. The most important thing for any country artist is singing something you believe in. You listen to a lot of American country acts and they sing about that kind of stuff because that’s what their life is all about. But for me, to try and sell a sing singing about lyrics I have no connection with, it’s not right so I’ve never been able to do that.

Let’s talk about the single, “Live As One”. What was the idea behind the song?

It’s probably the most different song on the album more so the subject matter. [Rick Price and I] decided that we wanted to write something with a bit more of a global message. We were looking at a lot of the events and mistakes we keep making as a human race; if you look at over history, we tend to fallback as an answer to problems with violence and it doesn’t work. More than ever, we wanted to put a song out there that had a message of acceptance, unity and understanding.

We live in a country, like Australia, where we’ve got a lot of different cultures and backgrounds, and we’re not going to agree with everything but it’s more learning to at least accept and understand that unity – whether it’s their cultural background, sexual preference or religion. That was the basis behind the song and it grew from there.

The music video, which features numerous people of all walks of life, does a great job at conveying that message as well. What was the idea behind the video?

We started getting all these little 10 second clips from all over the place and we put them all together to make the music video. Some clips in particular, [you can tell people have] gone to a heck of a lot of trouble. We didn’t want it to be just a focus on Australia. We wanted to get clips from different parts of the world and we were lucky enough to get a heap. Between Facebook and YouTube, it’s been viewed over 100,000 [times] now.

People are connecting with the song, liking the clip and sharing it. We went through a patch this year where people turn on the news [or] look at social media and your feed is just full of tragic things that are happening all over the world. A song like “Live As One”, and especially the music video, because it visually gets the message across, it’s nice for people to share because it is spreading a positive message.

As well as the single, people really seem to have responded well to the album. I’ve read so many positive reviews. That must be a buzz?!

It’s funny, because you’ve become so used to the songs yourself, you are curious to know what the general public are going to think of the album and how they receive it. It’s been interesting getting feedback of people’s favourite tracks but it’s also nice to hear that quite a few people love the whole album – sometimes that’s hard with a full length album!

I know myself, sometimes, you’ll get an album and you might skip a couple of tracks; it’s nice to know people are enjoying the whole thing. I’ve got a nice contingent of fans that are very loyal, which I’m thankful for! I wish I could multiply them by about 10-20,000. (Laughs) They’re just brilliant. It’s really nice that they’re helping. It makes it a lot easier.

Is it true that your musical journey hasn’t always been in country music?

It’s been a longer process getting into the country music scene. It’s taken me a long time to build up acceptance – whether that’s your fan base or your die hard country radio people. Everyone in the country music industry in Australia, once you’re accepted by them, they’re really very loyal and brilliant. They don’t just click their fingers and let it happen, which I think is a good thing – you’ve got to earn your stripes and prove that you’re serious about what you’re doing. It’s taken me a good five or six years.

I’d been wanting to go across [to Nashville] for a long time and it was the best thing I could have done! Once you’re in Nashville, you meet so many people in the industry – and a lot of Aussies that are over there – and I was fortunate enough to meet Rick Price just by complete chance. He just happened to be standing behind me when I was in a cafe ordering lunch. I was very lucky and we hit it off. He came and saw a show that I did and he liked what he heard and we started writing together.

So it was serendipitous in a way?

It was. It’s funny how the universe works. It’s getting a balance as a musician – there’s a lot of hard work and you’ve gotta work your backside off – but then there’s sometimes things that come along that are absolute luck, chance and in the right place at the right time – and that’s happened to me quite a few times.

Then it’s persistence! There’s a lot of times you get those opportunities and then you sit back and think it’s all just going to happen. I’ve had friends that have had that battle [but] you’ve still got to work hard and you’ve got to create other opportunities as well. It’s getting a mix of luck, hard work and being ready for the opportunity when it comes along – and I think that’s the key.

Especially after coming off a show like Australian Idol, where the odds of a career isn’t guaranteed, but a great platform to get your name out there. What advice would you give to any hopeful musicians who are considering competing on a reality television show?

If anyone was gonna go on, whether it is The Voice or The X Factor, which are the shows on these days, I think that’s the best advice you could give someone – once the show finishes that’s when the work starts!

You recently opened for Lady Antebellum at Country Summer Festival in California – what was that experience like?

Things are all just at a whole different level in the States – their big festivals, the way they operate, the tour buses and the semi trailers – it’s a big deal. Just to get a taste of that was a lot of fun! What I’ve learnt over the years, you find that Americans are really supportive. They want to help you, they wanna get behind you, and that was exactly what happened at this Lady Antebellum the show we did. We got to play main stage – there would have been 20,000 people in the crowd! We finished the set and we ended up selling all these CDs, signing autographs, and walking through the crowd for the rest of the day, my base player and my drummer, they were all getting stopped for photos – it was a really cool experience.

They also say Americans love Australian accents – did that cause awkward moments between you, your band and with the American fans?

Oh, there was a couple of awkward photo opportunities where some hands went in funny places. (Laughs) It’s all harmless fun and that’s just the way it goes. I can only imagine someone like Keith Urban must cop it everyday!

Live As One is out now.