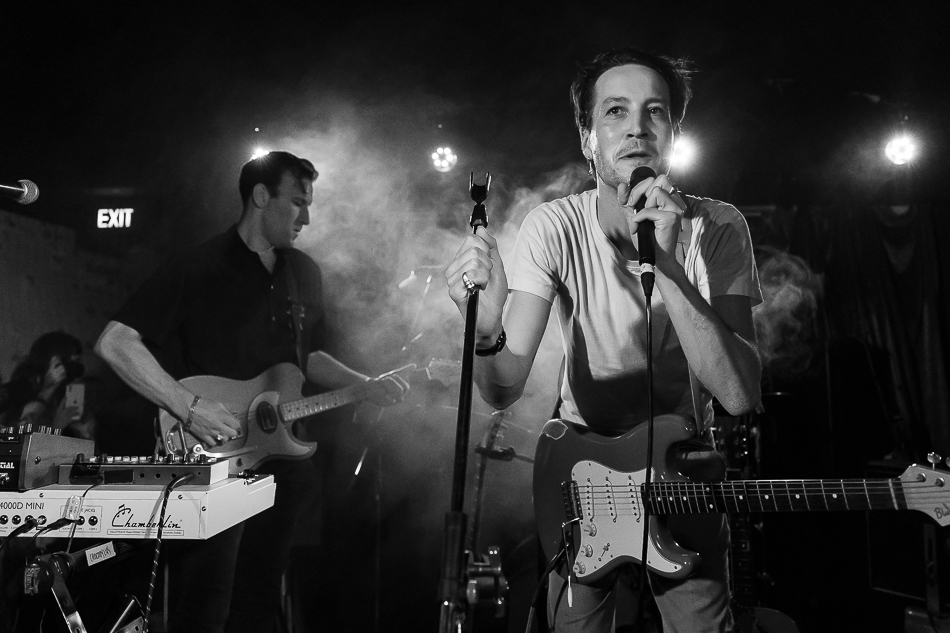 The sort of creature that vomits in a little bag as their plane lands in Brisbane should not, perhaps, feel entitled to comment on the week that followed. Unfortunately, I (the creature) feel just that sense of entitlement and will continue to comment. I am on the (now-profaned) plane, and in Brisbane, because I am lucky, and because I stick to opportunity like a bush rat in springtime.

I have come to BIGSOUND because I have received money to be there, to partake in The Music Writers’ Lab, to go to gigs, and to act the menace.

Newly focused by the expulsion of bile at 9 o’clock in the morning, I exit the airport bathrooms and text fifty-odd people of the town, to gauge which gigs are being attended by the in-crowd. The cruellest of the crowd reply with a variation on, “Aren’t you getting paid to be here (you haven’t shut up about it) / Shouldn’t you be on top of the best gigs / Why are you asking me.” This feels unreasonable.

The most irritating respond with vagueness: “Not sure, let me know what you head to, maybe I’ll check it out.”

And the final group: “Wasn’t planning on going. Let’s do coffee on Tuesday?” Don’t be ridiculous. I haven’t got the time. I’m here to work.

All of these Brisbanites, if not in the music industry directly, are avid gig-goers. Alongside a handful of them, I lived my time as a deeply unsuccessful and ineffective groupie (we don’t talk about that). The ones who are in The Industry seem more inclined toward the second option: nebulousness.

Artists who have not been invited to perform seem mostly annoyed – by my inquiries and the whole business – but some are apathetic (or not): “Being invited just means you’re in QMusic’s good books,” one tells me. Comments running along that line cannot simply be chalked up to bitterness, as there have also been discussions regarding the age range of artists chosen, and the lack of representation for older acts, particularly women (this certainly deserves a treatment of greater length and consideration than I provide here).

Alongside these critiques, however, the festival is notoriously effective for exposure. Every Brisbane artist who is a part of BIGSOUND seems thrilled to be included, although one points out that the week’s performances, “never feel like hometown gigs…not in a bad way. But they don’t feel like Brisbane gigs usually do.”

Then we have the out-of-towners being paid for their presence (whether by initiatives, publications, BIGSOUND, or copping the $600 delegate pass themselves. I am one of the latter now, and I revel in it, because lanyards make me feel powerful. Because of the lanyard, I am inclined to be smug, and to act shocked when Brisbane connections (!) tell me, from the first night onwards, that they aren’t inclined to pay $55 for a day pass. This comes after I have attempted to spread the Good Word on the worth of buying a ticket, whilst also disseminating lists of ostensibly free gigs.

At 11:05pm on the Tuesday, I receive a text which reads: “Gig not free / You lied.” This comes from the bassist of a local punk band.

As punks are not inclined to understand money nor the language of normal society, I ignore this person’s complaint. After later inquiries, it turns out that tickets to the venue were free – until 7pm – after which patrons had to start paying for a full day pass. This is a little bit sneaky, but as I say, the miscomprehension of those rules can be put down to the incapability of punks, and myself, to read properly.

I cast the protestations of punks from my mind – a necessary act as a music writer, for they are practised whingers. It might be easy to say (if not publicly) that BIGSOUND doesn’t need these whinging poor people – at its core it is a showcase, existing to connect artists with management, media, and executives. This leaves it with complicated priorities. If we take that as its central aim, why should it even try to get the locals onboard?

And yet, the priorities of BIGSOUND don’t feel lifeless on the ground. Compared to The Valley’s usual daytime tone (that is – quiet, and grey, and hard-surfaced. I can say that; I grew up there), it now feels full of motion – even if that motion is the heavy slouch of a DJ on the come-down. I’ll take what I can get. Is every person that I run into an acquaintance from a southern capital? Yes. But they’re here, moving through Brunswick Street mall, and in their presence the space is transformed from what I knew before.

For the most part, non-BIGSOUND gigs shut down from the Tuesday to the Thursday – who can be bothered? The exception to this is the events put on by Jet Black Cat Music (JBCM – they who can be bothered). The first is a surprise Tuesday performance by Marlon Williams at their Vulture Street shopfront. It is important to remember that Vulture Street is in the middle of West End, on the other side of the river to the BIGSOUND venues.

It is also important to note that this event is immensely popular, despite the store’s diminutive size.

I don’t see Marlon play, but I do see videos of a line that coils out of the store, and down the block. This is despite the fact that spaces inside the shop had already been allocated to those who pre-ordered his new record, My Boy (which is great, by the way). None of the fellow out-of-towners, however, know that it is happening; and it feels more and more to me like there are two parallel experiences of the week, running along different grids.

The main JBCM event is one that they have run for almost as long as BIGSOUND (in its current form), has existed: Sonic Boom.

Sonic Boom has taken other names previously, including, “Big Sounds” and “Little Big Sound,” the first of which held an outrageous line-up: Aldous Harding, Methyl Ethel, Holy Holy, Totally Mild, and Ocean Party. The poster for that one is written in sharpie, and on the bottom left an unevenly-drawn square holds the magic words: “Free and All Ages” – JBCM have continued to follow that tenet post-COVID (horrendous phrase). Sonic Boom now takes place at the Tivoli, an indication of its growth into a Real Festival.

On Thursday afternoon, I walk down Ann Street after stopping by the bottle-o. The worker at the counter seems delighted by BIGSOUND – “You here for it?” He asks, grinning.

“Yeah, I grew up here, but now I live in Melbourne, so it’s interesting to come back.” He looks surprised and I almost laugh.

The bodies already in the Valley’s centre trip around its main web, but no one is walking the path to the Tivoli. Music is spilling into the backstreets that lie behind venues. Office workers rustling out of the train station look confused, maybe because it feels like a live soundtrack has suddenly been built into the pipe system.

Inside the Tivoli, it’s very dark, very warm, and every single person there is from Brisbane – aside from some of the bands. The artists: Platonic Sex, Bones & Jones, Girl & Girl, Enola, and Phoebe Go have all played at BIGSOUND ‘22. Gabriella Cohen, Banff, The Oogars, Sunfruits, Das Druid, Miranda vs Arizona, Elizabeth, Moreton, and Aquapulse have not. 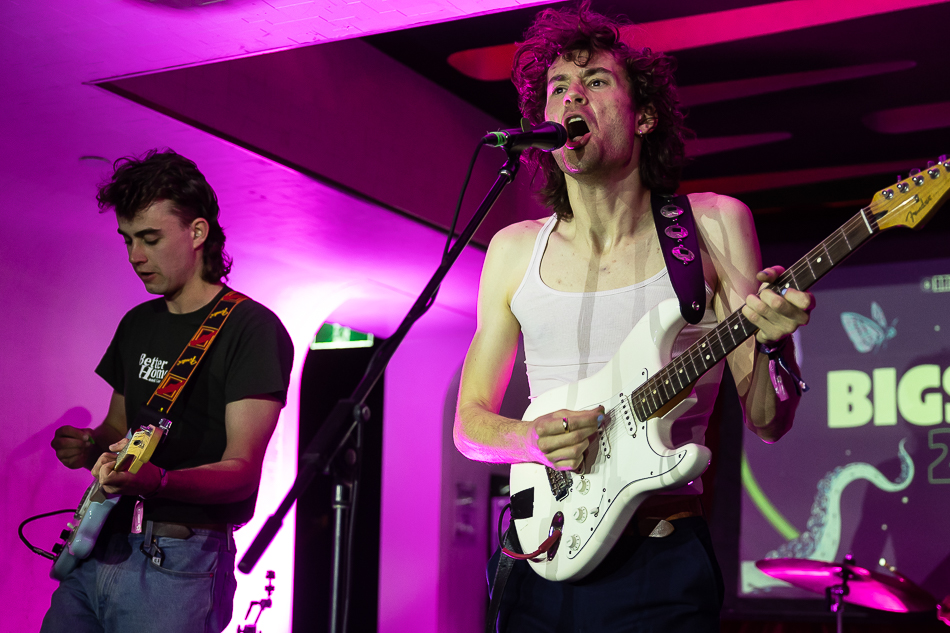 In between sets, I ask around to see if this is people’s first gig of the week. For most, it is – a few went to Marlon’s show, but barely anyone has a BIGSOUND ticket. This encompasses music professionals, young shiny PR-people-who-wear-sandals, Spring Hill sprites smoking weed in crevices, shroom-bearing wanderers from the East, etc. I leave around 7, and the crowd is growing.

The next night, Gabriella Cohen and Bones & Jones play with Folk Bitch Trio (FBT) at Howard Smith Wharves, after FBT play a driveway gig in West End (both put on by JBCM). I go to neither – these activities do not lie within my physical capacities at that point – but once more, I get to live them through Instagram, and it is clear that a big local contingent is present at both.

After skipping out of Sonic Boom, I run into an unexpected Brisbanite at COFFIN. Surprised, I ask when they decided to buy a ticket. They tell me that they snuck in via the backstairs of the Zoo. This gives me great nostalgia – I was eleven the first time I snuck into the Zoo – so I do not turn them in to the relevant authorities (as I usually would. I very seriously do not condone this behaviour). The very fact of people sneaking into these shows proves that they appeal to locals.

Can we, then, put the (potential) split down to money matters? Maybe, but there is also the practical aspect of most people having weekday-bound jobs, smothering their ability to attend gigs every night. I cannot comprehend what this would be like, so I do not try. But there also seems to be a more intangible aspect to the split – something that I can’t get a handle on in the way that I would like to. Or maybe the stereotypes are true, and the people of the town don’t care about music.

And yet, there remains a group of inner-city Brisbanites with an interest in music, with enough time, and enough money, who are not going to BIGSOUND – even when they live around the corner.

I am thinking about this when I receive the post-Bigsound survey in my email inbox a few days later. One of the pages displays these statements, which I am required to qualify from ‘strongly disagree,’ to ‘strongly agree’:

I tick ‘agree’ on all three.

On Friday afternoon, I walk up McLachlan Street, and into the Valley. I look for the debris that usually trails a festival, but there isn’t much, and the streets are very clean. It’s quiet – most of the delegates have flown out already – and everything seems to have shifted back to its usual pace. The next day, I fly back to Melbourne, and I don’t vomit on the plane. We end on a win.

This feature has been published as part of The Music Writer’s Lab initiative, developed between MusicNT and Australia Council of The Arts. For more information, visit www.themusicwriterslab.com.