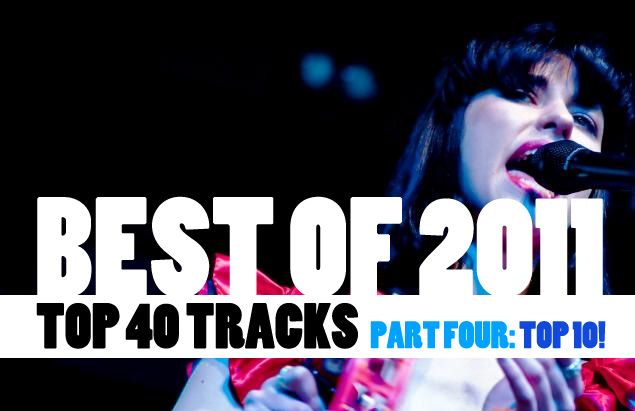 Let’s dive right into the final batch of favourite tracks of 2011, as voted by AU review contributors! The number one choice won by a landslide and we reckon this is a pretty good indication of what’s to come for the Hottest 100… does anyone else really stand a chance? Read on!

“Stay, Please Stay shows an alternative perspective. This one is written from a femme fatale’s point of view. While she may be able to hide under a cloak of fashion and mysteriousness when you peel away the layers you can’t help but avoid the honest truth – she just wants her lover to stay. Musically, it shares fragments in common with Chris Isaak’s naughtiness in “Baby Did A Bad Bad Thing,” Crowded House’s emotional “Instinct” and the sunniness of Cloud Control’s work.” – Natalie Salvo

“The Look emerges perfectly, its charming chords appearing ever so faintly like the call of a faded seaside fairground. It is deceptively simple and oh so goddam catchy. It’s all twee Beach Boys harmonies and a beautifully melodic synth solo before the song slowly fades leaving you wondering whether it was all just a daydream.” – Andrew Campbell

“Brother is nothing short of incredible. A musical journey condensed into just over 4 minutes, the piece is dynamic, powerful and somewhat explosive. The initial raw sounds of the introductory choral vocals and marching snare drum then melt into a delicate, lyrical, melodic phrase. This is all before Corby launches into a bridge infused with soaring, melismatic wails, and a chorus exploding with fierce, heartfelt energy. Considering the diverse elements explored within, the piece is impressively cohesive, completely traversing the notion of genre specification in music.” – Annette Wilson

“Cameo Lover finds Kimbra blending edgy vocals with femininity, delivering one of the highlights on the album. Kimbra entices and lures with her music and lyrics, not becoming repetitive in style or lyrical content.” – Sosefina Fuamoli

“Still Life is undoubtedly the theme track from The Horror’s smashing LP, Skying. They have an astounding ability to hook the listener in from the get-go with a resonating introductory guitar riff and keep the momentum flowing with anthem-like lyrics, accompanied by scintillating synths. One of their best tracks to date.” – Christine Khalil

“Although this single was released in November of 2010, the release of Adeles album ’21’ in early 2011 saw this song covered by bands and artists locally & internationally (everyone from John Legend to local boys Electric Empire). With it’s driving beat & tale of heart broken fuelled revenge you would have lived under a rock not to have sung (or, ahem, ‘yelled’) with conviction at some point in the year that “We could have it ALL, Rolling in the Deep”.” – Kristie Nicolas

Adele – Rolling In The Deep

Though they’ve been making their mark around the world – especially at home in the UK – for some time now, things are finally looking up for Bombay Bicycle Club in Australia. Their latest record just got a spot as Triple J’s album of the week and “Shuffle” has been heard just about everywhere. I had the pleasure of spending a bit of time with the band during their North American adventures and I have to say they are pretty rad dudes. But more importantly, this song is damn catchy. Enjoy!

A killer video combined with a rockin’ song helped tie off 2011 nicely with what was easily the most anticipated record of the end of the year for all of us here at the AU review. While the whole record got some mixed responses, the lead single from the record was another single of perfection from the Akron duo!

“Jungle wins my vote for song of the year purely for the integral nature of Emma’s vocals, her breathy delivery and the moving sonic tones which makes this an angsty love song that you can also dance to. It’s meaningful indie pop done to perfection.” – Kat Mahina

“Somebody That I Used To Know picks at the bones of a bond destroyed with vulture-esque finesse, Wally De Backer and Kimbra cast as scorned lovers for their respective grievances. On paper, by sheer weight of candor, the song appears insufferably emo. In the wrong hands, Somebody That I Used To Know might have resembled little more than a two-pronged tantrum. Fortunately enough, with Gotye at the helm – as calculated in his arty-inclinations as ever – its potential has been realized. The song demonstrates a brilliant pop-expertise delivered with delicate, heart-wrenching poise. In addition, Somebody That I Used To Know illustrates the kind of abandonment so universally familiar, it always looked likely to flourish as a single. Gotye and Kimbra speak to every demographic – from the teenage girls screaming into their hairbrushes to fully-fledged divorcees – in painting an evocative portrait of a bond broken down.” – Nick Mason

Gotye & Kimbra – Somebody That I Used To Know

Where unlisted, Larry Heath has written the introductions. Thanks to all the contributors who voted in our countdown and thanks to all of you who have read through this eclectic mix of our favourite tracks of 2011, and have supported us throughout the year. Keep checking back to find out our top 10 albums, alongside a pile of other best of lists!