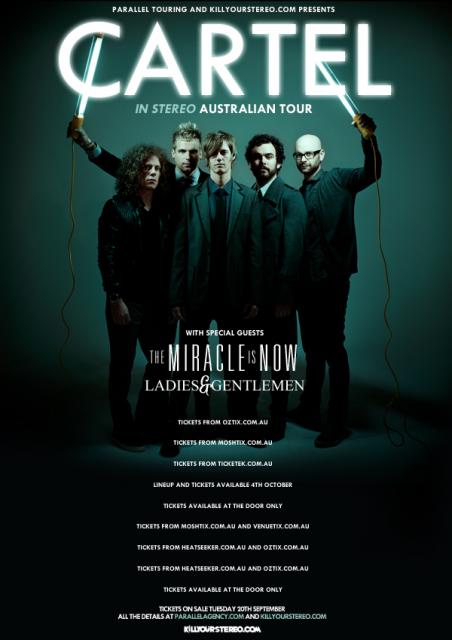 Atlanta pop-rockers, CARTEL, are set to Tour Australia this November, bringing their back catalogue, and new EP, In Stereo, with them for a showcase of large hooks, and explosive live shows.

Also known as MTV’s ‘Band In a Bubble’, the band have impressed the world over, while entering into the band’s 8th year. With an EP and 3 Studio Albums, and having travelled with the likes of New Found Glory, All Time Low, Good Charlotte and Hit The Lights, as well as headline Tours alongside Cobra Starship and Boys Like Girls from the band’s beginning, the band took time off in 2010 to begin work on their new 5 track EP, In Stereo.

With a spot on Soundwave Festival that feels like just faint memory now, the band will return finally for their first ever headline run of Australia, with a swag of new Songs. Joining Cartel will be Melbourne’s The Miracle Is Now, formed by Josh Burgan of In Fiction popularity. Clocking up some serious mileage in the Van around Australia, the boys have been seen sharing the stage with the likes of Mest, Kris Roe of The Ataris, Tonight Alive and Amy Meredith.

With their debut EP, We Are Insane, gaining the band some notoriety, October will see TMIN release the first single, The Mailman, from their forthcoming debut Album.

Rounding out the bill are Sydney upstarts, Ladies & Gentlemen. Since the release of the band’s debut EP, Brighter Lights, the band have hit the road with the likes of The Mission In Motion, Emery, and Valencia, as well as countless successful headlining Shows.

Nov 10
Oh Snap, Perth
18+
tickets available at the door only