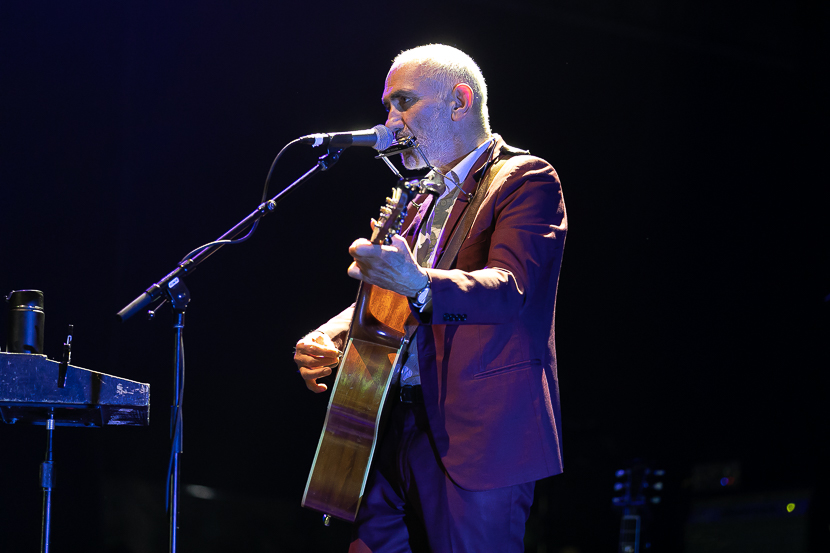 It’s a pretty amazing thing to see an artist who’s been around for 35 years continually reinvent themselves while managing to engage both the newest and oldest of fans. Returning for the third year of his Making Gravy tour, Paul Kelly brought along a heap of musical friends to well and truly welcome in the Christmas season. Playing Sydney’s The Domain, team PK had much more luck with the weather gods this year, as a balmy Saturday evening granted a near-capacity crowd a near-perfect six hours of class music to welcome in the season.

Opening up the day was Thelma Plum. After a slightly nervous start, Thelma very quickly hit her stride, as she mixed things up a bit and played a set modelled mostly off her fantastic debut album Better in Blak. Telling a story about how she nervously and mistakenly messaged Paul Kelly prior to turning up to his studio for a writing session, Plum was at her witty best throughout the short 30 minute set. Peaking on her last track “Clumsy Love”, I’m glad Thelma got the chance to play the show. After such a massive 2019, she definitely deserved it.

Up next was Kiwi maverick Marlon Williams. Having seen him earlier in the year supporting Florence + The Machine, nothing about his bluesy driven folk surprised me. Needless to say though, it was an all-round great set, that much like Plum, was over really before it started.

Just as the day was turning to night, everyone’s favourite non-European Eurovision act, Australia’s own Kate Miller-Heidke defied all gravity, as she set new standards for a show that had already reached lofty heights (I promised myself I’d avoid making a “Zero Gravity” joke. I’m so sorry). With a set that left out many of the songs I’ve grown to love about Kate’s music (namely “Can’t Shake It”, “Southern Cross Tattoo” and “Drama”), the tracks she did play however were all class as she truly crushed her set. Her band was super tight, vocals were flawless, and she had the mixed-age crowd really wanting it to last a little longer. Playing all her commercially successful tracks in “Last Day On Earth” and “Caught in the Crowd”, the broken down version of “Words” was also pretty special. Music aside, the funniest moment of the set came as she spoke about how much her son really doesn’t care about her live sets and would rather talk about what he got to have for dessert. Kate Miller-Heidke was fantastic and I’d encourage anyone who wants to see her to not think twice about it.

Playing second-to-last, Courtney Barnett let her guitar do a lot of the talking, as she made her way through the best parts of her back catalogue. I’ll admit, I was never the biggest fan of Barnett. I just didn’t ‘get’ her music when she first came to prominence in 2013. That’s on me. I’m happy to admit when I’m wrong most of the time. Having seen her a couple of times at festivals over the last few years, I can safely say that what Barnett does on stage is pretty bloody fantastic. Saturday night’s set was no different. Her fantastic “Avant Gardener” set the tone, before the sobering reality of “Nameless, Faceless” hit home. Closing on “Pedestrian at Best”, Barnett’s set was anything but. I’m glad I became awake to her gifts.

Creating and touring an annual festival must be tough. I’m not even going to pretend it isn’t. But what team Paul Kelly has managed to put together over the last three years really is something special. Managing to curate a show that highlights the quality and diversity of the Australian music scene, it honestly feels like you’re witnessing history every time Paul Kelly takes the stage.

Opening his headlining set solo with just a guitar and microphone, “When I First Met Your Ma” eased us into a near two-hour set that was truly career spanning. With much of the first half of the set showcasing tracks off his last few albums, the first hour threw out a couple surprises and classics. For every track played that was the epitome of Paul Kelly (“Before Too Long”, “The One I Love” and “Firewood and Candles”) there were more than a few surprises thrown in (like the Charlie Perkins ode “A Bastard Like Me” or the Adam Goodes inspired “Everyday My Mother’s Voice”).

Bringing out a heap of friends to help throughout the set, such as Kasey Chambers, the set slowly picked up its pace as we headed into the second half. Over the closing hour it was like shooting fish in a barrel, as just about every hit PK track was played (“To Her Door”, “Look So Fine, Feel So Low”, “Deeper Water”). Giving our love to Angus, the peak of the entire night naturally settled on “How To Make Gravy”, as everyone’s favourite recipe based happy-sad Christmas song absolutely hit everyone in the feels.

Closing the main set on the classic Darlene Love Christmas track “Christmas (Baby Please Come Home)”, the band returned for a brief encore including “Darling it Hurts” and the acapella traditional closer “Meet Me In The Middle of the Air”.

I’ve said it before, but Paul Kelly truly is one of the greatest musicians to come out of this country. And while he didn’t play every song I’d have wanted him to play (just once I want to see “From St Kilda to Kings Cross” or “Sydney From a 727”), you really couldn’t have asked for more. The gravy train rolled into town on Saturday and all the passengers were left more than happy they bought a ticket.

This reviewer attended the show on Saturday 14th of December 2019.