Over the last 12 months the Australian hip hop scene has seen an overhaul of the last era of popular artists like Seth Sentry and Bliss n Eso, handing over the baton to fresh new talent like Baker Boy and Kwame. Recently embarking on their 10 year anniversary tour “Dekade of the Thunderkat” and now releasing their 5th album, I Love Songs, Thundamentals forgot to hand over the baton and just kept running. This album has them heading in a new softer, melodic direction with new dreamy electronic and RnB sounds, keeping us on our toes, even chucking in some reggae influences in “True Love.”

An effervescent light that cant be dulled, Thundamentals are the perfect blend of talent and fun Australian flair which has lead to Everyone We Know hitting Number. 2 on the ARIA charts, snagging three certified Gold singles in Australia and just under 40 million streams worldwide. The playful charisma which lights up venues around the country is once again captured in this album, still taking a casual and contemporary approach at addressing some pretty heavy hitting topics in songs like “Overdosed.”

Preempting the albums diversity with two polar opposite singles, “I Miss You” flaunts their classic satirical, lighthearted sing a long with a strong piano bounce, best suited blasted on the way to work; a mood boosting remedy for the 9-5 grind.  The second single, “All I see is music,” has a hazy Flight Facilities like intro before teasing their new experimental sounds with a deep housey beat, groovy almost spoken vocals and an overall saucy mixture of chilled out goodness.

Thundamentals have given up on their politically charged commentary, evidently having limited impact when you look at the current political climate, with member Tuka explaining “Everyone knows how fucked we are politically, and Thundamentals have been banging on about it for ten years, “We just wanted to write love songs instead, ones that would actually make people feel calm and connect with people around them”

From mosh pit inducing, testosterone increasing songs like “Noodle Soup” and “Paint The Town Red” on previous albums, I Love Songs brings new vulnerability and emotion to the group, held up by their strong rhythmic hip hop roots.  Since their iconic 2012 Triple J Like a Version cover of Matt Corby’s ”Brother” which was never released on Spotify, there has been a brooding hip hop ballad sized hole puncturing Australian’s hearts, now filled by this charming album.

Described as their “most effortless album” each song still depicts a relatable and advice filled narrative, embellished with hilarious lines that stick with us for years to come. (Who can forget fan favourite line “When Billy Has a bitch about Susie to Milly, It says more about Billy than Susie” from “Something I Said” in 2014, which still goes mental at every show.)

Catchy hooks and playful melodies, “Pay Roll” and “Eyes on Me” will slide perfectly in to their concert set, the ideal summer festival anthems. Banger after banger, Thundamentals slam on the breaks in thoughtful “Everybody but you” and “Overdosed.” Without over-singing, their deep, smooth vocals are highlighted and brought to life with shimmery, clean production. “Worlds Gone Mad” shows some broken-beat American hip hop influences, proving they can still keep up with the best in the game without losing the Aussie rap sound they’ve helped forge this last decade.

Carefully chosen, feature artists Eves Karydas and Adrian Eagle perfectly season the album, making one big pot of spicy love song, carefully toeing the line between sweet and cringeworthy. Ever so loveable, pop princess Eves Karydas serenades us in “Catch me If you can” layering the song with emotion and tranquillising harmonies. Adrian Eagle then helps the boys close of the album with a reggae, soul groove that keeps you guessing what direction this powerhouse will go next.

There is nothing better than hearing the opening bars of what you and your friend claim is “your song” before giving them “the look,” preparing to dance and sing your little heart’s out. Thundamentals create this exciting, reminiscent feeling in all their songs giving you no choice but to entirely consume yourself in each moment. 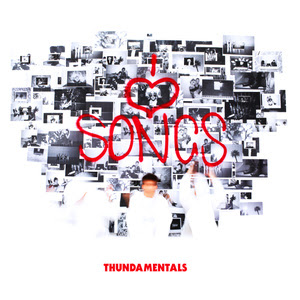 I Love Songs is out everywhere on Friday 21 September. If you want to be one of the first to check out the new album live, head to their website HERE for tour dates.

Tags: Album of the Week, Thundamentals