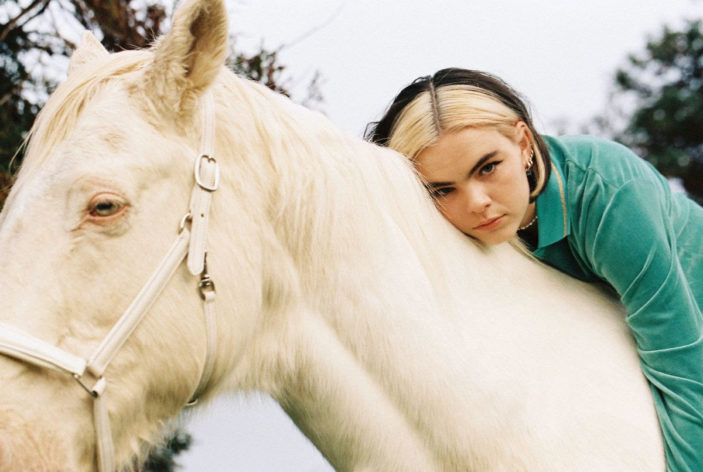 Few artists worldwide have had as large and impressionable a past two years as BENEE. On the back of a string of hit singles strewn across two simply fantastic EPs, BENEE has seemingly been able to write songs with monster pop hooks, all whilst delivering them with a sweet level of melancholy and sincerity. Here on her debut album, Hey u x, every facet of the BENEE we’ve come to know and love shines through from tracks one through to thirteen.

Written over a period before and during lockdown, BENEE (Stella Rose Bennett to her parents) has pieced together a mix of downbeat sad-girl tunes and downright genre-bending instant classics. Opening with the overtly personal “Happen To Me”, BENEE sings about the loneliness and anxiety experienced by so many musicians. Touching on themes of death, she is honest right from the opening lyrics, as she ponders about what could happen if she ever struggled to deal with depression. Hidden behind slick guitar licks, “Happen To Me” is a sobering entry into an album from an artist who on the surface level is very happy-go-lucky.

As mentioned, Hey u x is filled with just as many sad tracks, like “Happen To Me”, as it is with riotous tracks, like “Sheesh”. Featuring a guest verse from Grimes, the drum n bass beat is an early and definite highlight that helps kick Hey u x out of first gear.

Despite featuring the trio of pre-release singles “Supalonely”, “Snail” and “Night Garden”, Hey u x doesn’t have to rely on these three tracks to make it work. Even if all three are full blown bangers. “Supalonely”  remains inescapable more than a year since its release. Whilst the production of Kenny Beats and raps of Bakar make “Night Garden” one of 2020’s most effortlessly cool tracks.

With a slew of guest spots across the album, the best of them comes in the form of the slinky “Winter”, featuring the undeniably distinct tones of Mallrat. It is by no means a surprise, but I genuinely couldn’t think of two artists that would be more suited to appear on the same track. “Winter” has a level of cool that is unrivalled on the rest of Hey u x.

“Kool” wouldn’t have been out of place on Daft Punk’s Random Access Memories, with its funk bass and observational humour of wanting to be like that one cool person we all know. Rivalling the singles of the album, “Kool” could quite possibly be the best song of the album.

Not afraid of genre bending, BENEE uses Hey u x to showcase her willingness to change things up a bit whenever she feels like it. The downbeat “A Little While”, with overly simplistic drums and rhythm guitar is the artist at her barest. Meanwhile the openly sad yet fun “Plain”, featuring Lily Allen and Flo Milli, touches on a more RnB vibe.

Closing out Hey u x with the manic and underrated “If I Get To Meet You” and the entirely fantastic and acoustic “C U”, you get the feeling that BENEE may have fallen just short of what could have been delivered on her debut album. Despite this, Hey u x is still a cracking, albeit a little sad and melancholic listen. From what we’ve seen over the past two years, BENEE is bound to keep making festival ready bangers for a while to come; whether they’re sad, fun, upbeat or cruise from start to finish.

BENEE’s Hey u, x is out Friday 13th November. Pre-order it HERE. You can keep up to date with BENEE via Facebook and Instagram.