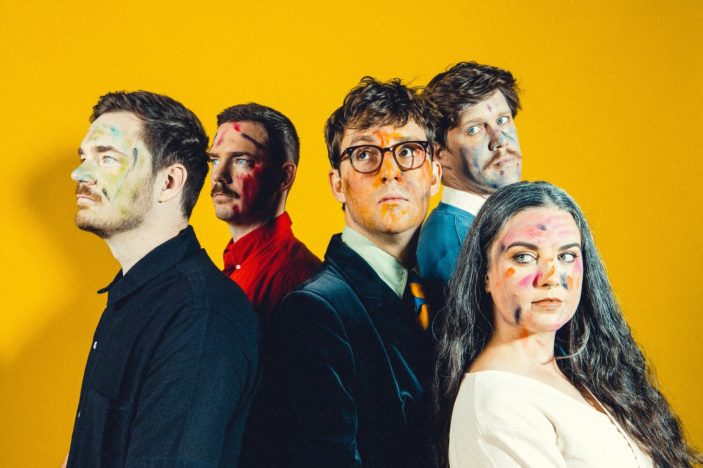 You know that TikTok that says something along the lines of ‘things in my x that just make sense’? Well that’s sort of like listening to a Ball Park Music album; everything in it just makes sense. It must be hard being Australia’s loveliest band. Not only do you have to worry about releasing album after album filled with hits, but you also have to just be all round legends all the time. It’s a tough task and title but one Ball Park Music pulls off with aplomb continually. With six albums under their belt already and almost 500 shows, BPM are back with LP seven, the fantastic and contemplative Weirder & Weirder.

Coming less than two years since their self-titled masterpiece, Weirder & Weirder shows the band evolving and growing up once more, just as they have on every album they’ve released prior. With hints of their best sprinkled throughout all twelve songs of the album, there appears a renewed sense of adventure, joyousness, reflection and awareness on Weirder & Weirder; which honestly isn’t all that hard to do for a band that has always been more than handy at creating sing-a-longs and classics in waiting.

Opener “Manny” is Weirder & Weirder‘s answer to Ball Park Music‘s “Spark Up!”. As song cousins, they’re both one way or another a protest song. Where “Spark Up!” was a call to action against the man, “Manny” is a call to action against your phone and the concept (read: reality) of how reliant and consistently we’re connected to them. It’s a poignant opener filled with instant and fuzzed out riffs, all the while maintaining a level of Ball Park normality.

Following “Manny” is “Pleb Rock”, a pleasant and relatable stock standard track, filled with the pleasant tones of Sam Cromack, matched with a relentless and wonky guitar hook. For any disciples of the church of BPM, the first thing you come to realise is the band are without a doubt just normal people whom have happened upon the ability to constantly make great music. Not looking down on their fans from a citadel, “Pleb Rock” reminds the listener that the band are just like you and me, which honestly, makes them even more lovely.

The band has teased the new album over the past six months with “Sunscreen”, a wholesome four minutes filled with beautiful harmonies, superb layering and great sentiments regarding sun safety, while “Stars In My Eyes” feels like an instant classic or the feeling of catching up with a long lost friend as you regale retrospectively about the past with rose tinted glasses. There’s a steady sense of dizziness across the whole of the album, while the consistent theme of the album is about living in the moment, removing yourself from distractions, and purely enjoying what time you have with friends and loved ones.

“Right Now” asks the listener to not get caught up in the distractions of the big bad world, while “Caramel” asks you to be present in the moment and not stare at your hand/phone – without putting too much pressure on yourself to over-achieve (‘there’s only so much you can do in a day’). The closing half of “Caramel”, with its magnetic orchestral vibes and magic backing vocals from Jen Boyce, is easily one of the most pleasant 2 minutes of music you’ll hear this year.

The second half of Weirder & Weirder, while no weirder than the first half, is the part of the release that gets caught up in its emotions and self reflection. “The Present Moment” continues with the theme of being in the moment, as Cromack talks about how easy it is to enjoy being in the now, while “Writing Hand” borrows the orchestral tones of “Caramel”, as the strains of Cromack’s vocals strive for a new high. If played in a small band room (heck, any closed setting), the titular “Weirder & Weirder” would undoubtedly be the crowning moment of a live set, with its raw percussion, distorted keys and melancholic harmonies. The type of song to close out a show (or coming of age movie), it’s wholesome and pure and is just about the pinnacle of the album.

The most tender moment on Weirder & Weirder comes on “Beautiful Blueberries”. The love song on the album, it touches on knowing that where you are and who you are with is exactly where you need to be. It’s wholesome and will be the first dance for plenty of marriages in years to come. (I mean, with a lyric like ‘there’s no greater feeling than a feeling that’s true/ nothing can change the things I feel for you’ there is zero chance of the tissues not being brought out).

Closer “Three Little Words” feels like the most traditional of Ball Park Music songs, drenched in nostalgia, filled with quality musicianship, bulletproof lyrics (‘life can be so beautiful sometimes’), a little bit of chaotic musicality and just all-round good vibes. It’s a safe and pure closer to an album from a band who just knows what needs to be done and delivers each and every time.

In keeping with the overarching sentiment of the album, it’s recommended to listen to Weirder & Weirder as a whole. Take the chance to engage with the album and its stories; it will be a cleansing and holistic experience if you do. From their singles through to their more experimental moments, Weirder & Weirder is Ball Park Music making sense of it all in a time where not a lot is making sense. Without over using the word, the album and band just make sense. There’s nothing more to it.

Weirder & Weirder is out Friday 27 May via Prawn Records.