Album of the Week: Ball Park Music are back and bloody glorious on their new self titled LP (2020 LP)

There’s a strange level of satisfaction reviewing a new album for such a universally loved band like Ball Park Music. It’s like listening to the news that your best friends are getting married, that you’re going to become a parent for the first time or that the coronavirus has been eradicated. It’s pure, unadulterated excitement, happiness and pure ecstasy all wrapped up in red hot songs. Returning on their sixth album, aptly titled Ball Park Music, the consistently prolific five piece from Brisbane are back with their most complete and flawless release yet.

Ball Park Music are effortlessly and seemingly everyone’s favourite band. There’s an unparalleled level on which you can relate to the band’s music, humour and ability to always come through with the goods. With such a strong history of crafting ripper tracks over the past ten years, you couldn’t blame them if they released an album that didn’t quite hit the spot. Lucky for you, me and every ear who happens to hear the album, there’s nothing to worry about here: it’s fantastic from front to back.

Ball Park Music, formerly titled Mostly Sunny, feels like the band have entered into a new phase. While there’s still those undeniable and instant tracks that will form the basis of many live sets for years to come; there’s also a level of maturity on the album that the band has previously hinted at, but only have now managed to achieve.

Entering an age where members of the band are now parents, there’s a level of reflection and love in a fair chunk of the songs that make you sit back and genuinely realise how unrivalled and great the band really is. Sure, the band have always been able to craft melancholic masterpieces across their previous five albums, but on Ball Park Music, it becomes even more evident and prevalent.

“Day & Age”, with its understated rhythm guitar (and equally understated video clip) is a prime example of how the band has levelled up on the album. A slow burner first and foremost, its culmination over the closing minute is prime BPM. Not to be out down, “Cherub” usurps “Day & Age” for its build and quickly rises to the pinnacle of all-time Ball Park tracks. The intricate keys and delicate layering sets the tone, before the crashing percussion and the longing tones of Sam Cromack culminate in what could quite possibly be the best Australian song of 2020.

While “Cherub” and “Day & Age” are definite slow burners, the controlled chaos of “Spark Up!” is Ball Park Music at their most defiant. A call to arms and protest song for 2020, “Spark Up!” has the dignified swagger of all the classics and realistically the cheekiest swear you’ve heard in a long time.

The band have always been capable of changing up their style. They’ve ever so gradually evolved over the past decade to become more than your stock standard indie guitar band. Entirely self-produced and released on their own label, Prawn Records, the band has indulged in thin layers of distortion and psychedelia, creating ten tracks (plus the instrumental “KatKit”) that draws on varying degrees of adulthood and marks a new day and age for the band (sorry).

“Nothing Ever Goes My Way” is a song about, well, nothing ever going your way. The slightly muffled vocals, matched with the crooning quality of Cromack and the subtle backing of Jen Boyce turns the song into an electric near four minutes of pure and classic BPM. The keys of Paul Furness is the real hero of the song, before the band’s love of bird sounds takes over the closing seconds.

“I Feel Nothing” has a Get Born era Jet feel to its opening guitar riff. Two thirds of the way through it has the hallmarks of being your classic Ball Park, as Daniel Hanson‘s drumming hits its consistently high standards. Just as the song feels like it’s topped out with the hypnotic chants of Cromack and Boyce saying ‘I feel nothing’, the real shredding occurs as Furness takes the organ for a walk and delivers one of the best solos you’ll hear.

Part three of the “Bad Taste Blues” trilogy makes a sombre and sweet appearance, as the strength of Cromack’s vocals seep through, while the lead guitar of Dean Hanson takes on a Moonfire era Boy & Bear vibe. It’s a cruisey track that sits somewhere in the middle of the Ball Park Music scale of banger to sad song (you know the type).

I noted earlier that the album is a new era for the band. This is most evident in “Turning Zero”. Evidently a song of love for Cromack’s daughter and wife, the lullaby tones of “Turning Zero” is lump-in-your throat lovely. This is a song for all new parents to sing to their newborns and partners. The soothing backing vocals of Boyce, when matched with Cromack’s delicate delivery, make “Turning Zero” a humbling and gorgeous climax to the album.

In a year where you can’t really bank on anything going to plan, just know Ball Park Music has you covered. If I was a betting man, I’d back them all the time, every time. Ball Park Music is proof you’ll never lose.

Ball Park Music’s self-titled album Ball Park Music is out Friday 23 October. Pre-order your copy HERE. You can keep up to date with BPM via Facebook, Twitter, and Instagram.

The band kick off their residency at Brisbane’s The Triffid this Friday. With a new show just added the residency will run to thirteen shows. More than half are already sold out, but there’s still a few tickets left for the end of the run. The October 23rd show will also be live streamed to your living rooms via deliveredlive.tv. 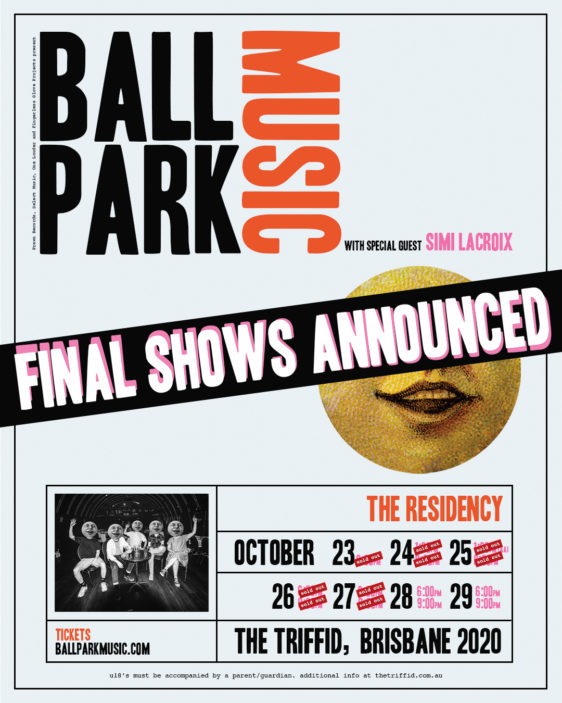