The Austin City Limits Festival has just dropped its 2022 lineup, and once again it spans many decades, genres, and music tastes.

This October, over two weekends, an eclectic mix of the biggest names in music will join the next generation of artists, as they fill Zilker Park in Austin, Texas in what is one of the best music festivals in the USA.

The festival, which began in 2002 and takes its name from the iconic PBS series of the same name, is considered one of the best music festivals in the world with its star studded lineups and absolutely beautiful location. It’s family friendly and accessible, providing an immersive experience for all those in attendance.

Each year, ACL delivers multiple big time headliners, giving the audience a tonne to enjoy, but also ensuring there’ll be some very difficult decisions on the scheduling front. This year is no exception as it sports 8 headliners at the top of its bill. Those names are Red Hot Chili Peppers,P!nk, Paramore, The Chicks (fka The Dixie Chicks), Sza, Lil Nas X, Kacey Musgraves, and Australia’s own Flume.

The fun doesn’t stop at the top of the bill, as the mid card is loaded with some of the newest and most exciting bands to hit the scene. UK buzz band Wet Leg, Jasmine Sullivan, Billy Strings and Ghanian-Australian Genesis Owusu all will be making their ACL debut. And you’ll see many more such names further down this article.

As the festival turns 20 years old, the festival will continue to be held over two weekends, much like Coachella, with some variation on the lineups across each weekend.

Tickets are now on sale on the ACL website. The festival will take place at Zilker Park in Austin, Texas on the weekends of Oct 7-9 and 14-16.

Other highlights of the Festival lineup include: 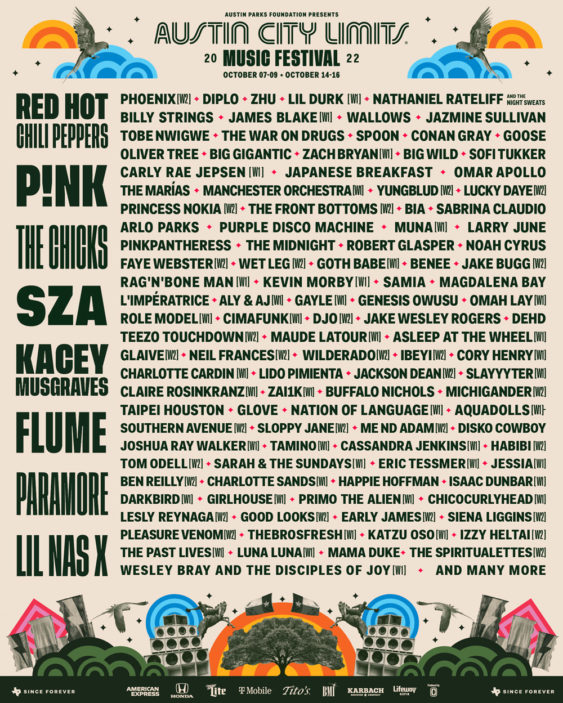 Headline photo by Waytao Shing for the AU.