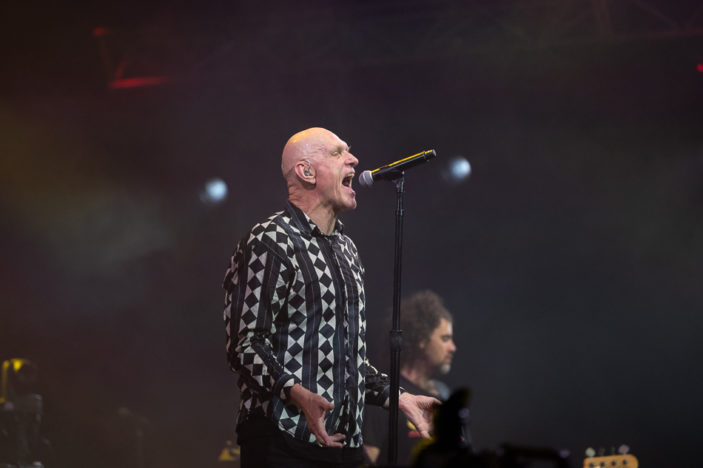 The excitement was palpable as we crunched our way through mud and pebbles towards the 33rd annual Byron Bay Bluesfest. After two years of cancellations, the 2022 festival was not just a celebration of music but a true celebration of life and the joy of human connection.

I’d had my first Bluesfest experience back in 2001 as a little girl standing atop a chair to see over the heads of swaying adults. I remember a funny-smelling cigarette being passed around as Midnight Oil‘s frontman Peter Garrett convulsed on stage as he sang about a burning bed. 21 years later, and here I was again, the same smell in the air, but now wise enough to understand the political undercurrents of a ravished bed frame.

This year’s line-up (albeit missing its international artist drawing card) was still impressive. Crowded House, Paul Kelly, John Butler, The Cat Empire, and my old friends Midnight Oil were all primed to grace the stage. The schedule was as explorative as it was captivating, with some lesser-known artists also nabbing primetime slots. Half the magic of Bluesfest comes from wandering around and never quite knowing what rabbit hole you’ll fall down. It could be a melodic acoustic set that clouds your eyes and engulfs your heart or a vibrant electric guitar riff that sets your soul ablaze.

The overlying tone of the festival was one of gratitude. The punters were grateful to be there, the artists were grateful to be performing, and most of all, we were all grateful to once again feel the undiluted ecstasy of freedom. We danced unabashedly, swinging our arms in the air and sharing hugs, kisses, and smiles. Happiness pervaded our realities as we allowed the music to bring us back together, not just as a society but as friends.

The highlight for me this year was seeing the artists living out their dreams. You could hear the raw emotion when they spoke on stage, and we supported them while they had their moment. Roshani has come a long way since busking out the front of Starbucks and was a true joy to stumble across. A musician with as much depth as talent, her range could almost rival her impressive guitar collection.

Minnie Marks was another surprise stumble. With that voice and those skills, it’s no wonder she won the Bluesfest busking competition back in 2011. I’m very vocal about my love for Tijuana Cartel and their ability to give you a psychedelic, full-body experience purely through their sound. When you move your body to their music, a meditative ecstatic dance engulfs your very being, and you become one with the beat.

C.W. Stoneking is as unique as he is talented. His raspy voice cuts deep, and I swear his guitar is imbued with voodoo as he captivates his audience profoundly every time he saunters on stage. 19-Twenty brought some serious energy to the stage and will have you enthusiastically flailing your limbs in time to the music.

Speaking of dancing, Fat Freddy’s Drop really got the crowd moving. Crowded House had us all singing at the top of our lungs, and John Butler got the emotions flowing with his impassioned speech. An absolute whirlwind for the mind and body.

By the end of the five days, I felt like my entire DNA was now just made up of musical notes. My back was sore, my boots were covered in mud, my ears were ringing, and I could not be happier. Thank you to new friends, old friends and everyone in between for joining me on this spectacular journey into the heart of the 33rd annual Byron Bay Bluesfest.

All photos from Bruce Baker