The Legend of Zelda: Skyward Sword HD may be the balm the Zelda fandom needs while it waits for more details on BotW2. Originally released for the Wii, Skyward Sword was the only Zelda game to utilize motion-controls in gameplay. Upon release, Skyward Sword was met with mixed reviews from fans and sold over three million copies worldwide. But how does it fare now?

Here’s a quick recap of Skyward Sword‘s story for the uninitiated:

Skyward Sword is chronologically considered the “first” game in the Zelda timeline. The Hylians have lived in Skyloft, away from the rest of The Surface, for ages. Hylians are considered the direct descendants of the Goddess’s mortal incarnation, and were kept safe in the sky from evil forces seeking to abuse the power of the Triforce. However, things take a turn when Princess Zelda is pulled beneath the clouds by an unknown entity. Although the residents of the Surface below have not seen a Hylian in years, they seem to be friendly to the presence of Link and Zelda.

As usual, you are Link. Armed with the legendary Goddess Sword (and companion Fi), you will stage a daring search-and-rescue operation to the Surface to recover Zelda. On your way, you will uncover and fulfil a previously determined “destiny” by the Goddess, Hylia.

While the story in itself has always been the best part of the game, I’d like to base this review more on the gameplay. It’s been 10 years since the original on the Wii and the core of the story is the same. Although this game is meant to be a remastered version, Nintendo did announce various quality of life improvements to the gameplay. So, has it really improved?

How does the remaster fare on the Switch? I have mixed feelings.

Let’s start off by saying that the autosave feature is an absolute lifesaver. It has already saved me more times than I can count, and it does take a big load off the mind—namely that I don’t need to save every time I come across a statue.

The other thing that I’ve appreciated is the ability to speed things up. One of the things that Skyward Sword is known for is its length, and Nintendo did well to try and improve that. If you’re already familiar with gameplay, there are lots of “go to x to learn about x” bits that you can skip. Lengthy cutscenes are skippable as well, and you won’t be told every time you pick up an item what that item is for. Time savers, the both of them.

I’ve played Skyward Sword both docked and in handheld, and I’m happy to report that this game plays pretty well both ways, to a degree. I love being able to enjoy different motion controls for different weapons at Link’s disposable—first with the sword, then eventually the slingshot and the bow. I’m a huge fan of game immersion, and I really appreciate the ability to swing a sword or actually knock back arrows. 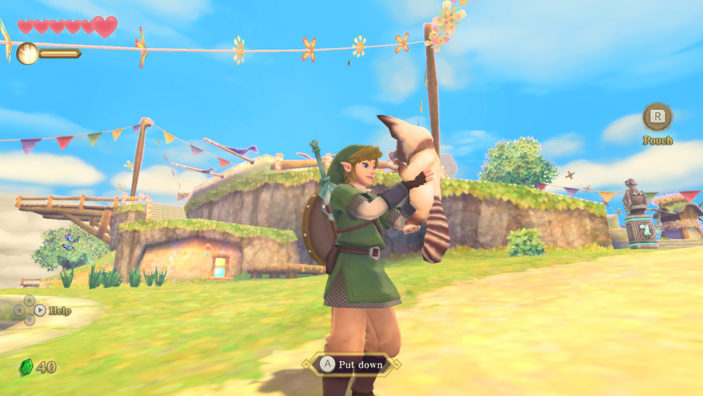 After finally obtaining the heart to part with Gaepora’s clingy AF Remlit, I finally got down to the Surface to put the motion controls to the test. And honestly, I feel like the controls are still pretty wonky. It feels like the motion controls can’t figure itself out. I’m constantly having to reset the gyro sensors or risk getting hit in the face because I can’t get the controls to slice the right way. It also becomes absolutely frustrating when you’re trying to drive the Beetle.

Aside from that, I wish Nintendo considered adding there’s one quality of life detail—the total removal of the Rupee limit. I admit, I completely forgot that this was a thing until the moment Fi told me that my purse was full. I’d have to then look for a bird statue to go back to Skyloft in order to empty it. Plus, considering that items are quite plentiful, this did not bode well for my “everything is mine” nature.

Overall, I still believe that Skyward Sword is an amazing title in the Zelda series. This HD-remaster, however, could have done a lot better gameplay-wise. A few tweaks to motion controls would have made the game near perfect, in my eyes.

The other thing was the game forcing me to have to keep going back to Skyloft in order to empty out my purse. You’d think that a game wouldn’t do this in 2021, remaster or not. Sadly, Skyward Sword HD did, infact, not.