Star Wars Jedi: Fallen Order Review: The Force is Strong with This One

Like the galaxy, the library of Star Wars video games is incredibly vast. As a huge Star Wars fan, every new experience becomes an automatic purchase, the hope that each new title will be better than the last. A true digital representation of the Star Wars universe in the palm of my hands. While some remain beloved to this very day, many others have missed the mark.

I’m pleased to say that you can relax: Star Wars Jedi: Fallen Order is a masterpiece, and one of the best games I’ve played this year. Stellar gameplay mechanics are interwoven with a relevant and emotional tale of loss and redemption sure to stick with players long after the credits have rolled. Simply put: This is one of the best Star Wars games ever made.

Developer Respawn Entertainment is no stranger to a big stage. Having crafted impressive titles like the criminally underrated Titanfall 2, their pedigree for crisp visuals and innovative traversal have found their way into this latest project. Jedi: Fallen Order ticks almost every box that players want in a Star Wars game — a single-player, story-driven, action-adventure title with rewarding exploration and combat. Respawn’s take is a heady blend of Uncharted, Metroid and Dark Souls and it works a treat. 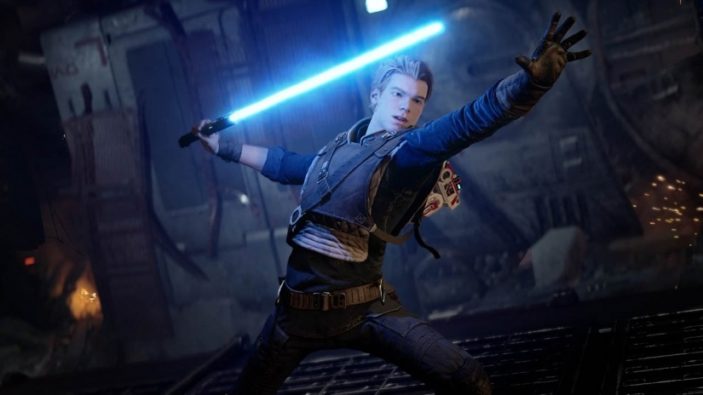 A long time ago

The story takes place between the events of Episode III: Revenge of the Sith and Episode IV: A New Hope, and follows Cal Kestis (Gotham’s Cameron Monaghan). Cal is a Jedi who survived Order 66, now eking out a living on the junker world Bracca, turning scrapped Republic capital ships into Star Destroyers. When Cal’s identity is discovered by an Empire Inquisitor named The Second Sister, a galaxy-spanning game of cat and mouse begins. After being rescued by a ship captain named Greez, and a fellow surviving Jedi Cere Junda (Debra Wilson, The Outer Worlds), the trio scoot across the galaxy in search of a long lost Jedi secret.

The less I say about the story from there, the better. I know that sounds like a cop-out, but there are some fantastic moments that are not only canon to the franchise, but worth discovering on your own. If I have a gripe, it’s that while Monaghan gives a respectable performance as Cal, he’s the story equivalent of vanilla ice cream. There’s nothing interesting or memorable about the performance. Wilson acts rings around Monaghan as Cere, her performance perfectly communicating the quiet but bottomless guilt of the survivor. Greez (Daniel Roebuck, The Man in the High Castle) serves as captain of your ship, the Mantis, and the game’s comedic relief. Overarching villain The Second Sister proves a daring and dangerous foe, but shows up infrequently, and is never really given enough of the limelight to let her truly shine.

As often happens, however, it is Cal’s droid buddy BD-1 (played legendary Lucasfilm sound designer Ben Burtt) that steals the show. BD-1 is a cute, helpful and charming sidekick, who develops a strong and believable bond with Cal. Crucially, the story feels like a natural and relevant addition to the Star Wars narrative, providing more than enough context to Order 66 through some incredibly memorable sequences. 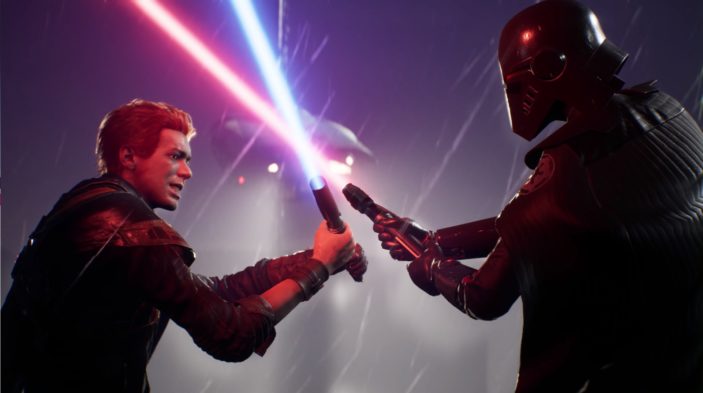 Patience, you must have

Jedi: Fallen Order‘s gameplay serves a balance of traversal, exploration, and combat. Its chief inspirations — Uncharted or Dark Souls — can be felt throughout. The core gameplay loop is simple: Cal arrives on a new world filled with multiple routes, collectibles and dangerous enemies, and slowly moving towards a particular objective. While combat will be instantly recognisable to Dark Souls fans, much of the associated difficulty is stripped back to promote a smoother experience.

This is not to say the game is easy — on the whole, Jedi: Fallen Order relies on well-timed dodges, blocks and parries, in combination with Force Push, Pull and Hold. Both Cal and surrounding enemies utilise a “blocking metre” which must be worn down to break an opponent’s stance and ultimately deal damage. This feels calculated and strategic, as even without a stamina bar, I found myself planning and coordinating each my strikes. This actually makes it feel like it has more in common with Sekiro than it does Dark Souls, more focused on technique than raw survivability. Everything comes together in a satisfying blend of calculated chaos, and stands as one of the most involved and accurate depictions of lightsaber combat I have ever seen in a Star Wars game.

Traversal and exploration go hand in hand, as each planet has been crafted with space for you to climb, wall run, slide and swing about. Hidden pathways and shortcuts will keep you busy as you track down hidden collectibles and double back. Collectibles run the gamut from Expanded Universe lore to customisable outfits and lightsabers, skins for BD-1, and even paint jobs for the Mantis. While there’s plenty to see, I was rarely lost. Instead, I found myself sidetracked out of pure curiosity. This is excellent level design, as multiple paths interweave, ensuring that wherever you go, you’ll find something worth searching for. 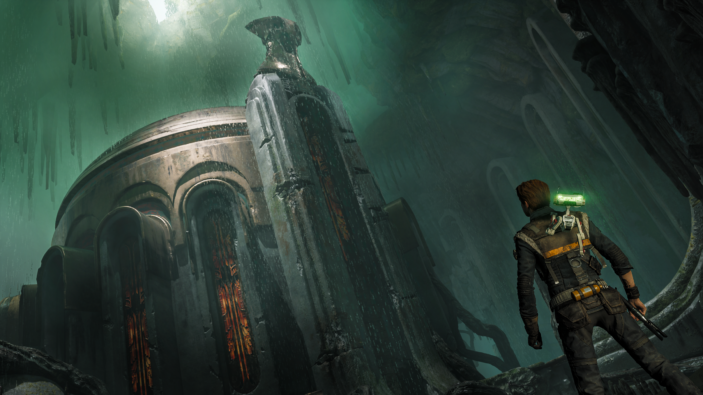 Light RPG elements add another layer depth to the experience. Cal earns Force points by defeating enemies and discovering objects of importance. Once you find a meditation point (another mechanic Souls fans will recognise), Cal can purchase abilities that improve his combat and force abilities or provide him general survival perks. Each skill feels important and relevant, and while you’ll purchase most of the skills by the end of the story, players are welcome to build Cal in almost whatever manner they like.

While Fallen Order does almost everything right, it’s performance currently leaves something to be desired. While the Xbox One X and PS4 Pro versions feature performance modes that lock the experience at 60 FPS, slowdown would appear seemingly at random, particularly in chaotic moments of combat. Further, some awful texture pop-in regularly draws the eye, some loading in as late as the end of a 30-second cutscene. It’s a shame as, for the most part, Jedi: Fallen Order is a gorgeous game, fully leveraging the Unreal Engine 4 platform (a notable and welcome break from EA’s tradition of using their Frostbite engine). I hope that Respawn gets around to adding a dedicated photo mode because those skyboxes demand photography. Thankfully, most of these issues did not detract too much from the already stellar experience, though it’s clear that the game went gold a little while before it was totally ready.

Star Wars Jedi: Fallen Order is without a doubt one of the greatest Star Wars games ever made and a strong game of the year contender. Fantastic and satisfying combat mix with deep and engaging traversal mechanics and keep the player hooked. The story reflects on the fallout from Order 66, with some impressive and emotional moments strewn throughout. While various performance issues frustrated me at times, they couldn’t put a damper on my enthusiasm. It took EA five years and multiple attempts, but they finally pulled it off: the Force is most definitely strong with this one.