Upon its reveal, SpongeBob SquarePants: Battle for Bikini Bottom stood out in a sea of remakes and remasters. Here, among so many others, was one to look forward to, for the reason anyone looks forward to any remake: I have many fond memories of the original PS2/Xbox version. That said, SpongeBob SquarePants: Battle for Bikini Bottom Rehydrated left me disappointed, but not in the way you might think. In many respects, this version is every bit as good as the original. But in today’s landscape, this may have been a poor choice of title to remaster. So many platformers have gone above and beyond the caliber of game presented here. SpongeBob SquarePants: Battle for Bikini Bottom Rehydrated does little to push the original forward, bringing across gameplay that in 2020 feels tired and uninspired, the curiously uneventful story, and frustratingly aged platform mechanics. This appraisal may sound harsh. While a younger audience may be well served by this experience, when you place this alongside remasters like Spyro Reignited Trilogy and Crash Bandicoot N-Sane Trilogy, it’s clear that your money could be better spent elsewhere.

Welcome Back to Bikini Bottom

As in the original, SpongeBob SquarePants: Battle for Bikini Bottom Rehydrated sees players controlling SpongeBob, Patrick Star, and Sandy Cheeks in an attempt to stop the villainous Plankton from destroying Bikini Bottom after accidentally creating an army of evil robots. While the story serves as an excuse to bounce your characters between levels set in iconic locations from the show, such as the Jellyfish Fields and The Flying Dutchman’s Graveyard, it actually takes a backseat for the majority of the experience. That being said, for a younger audience, I can understand the fact that breaking each location up into smaller, bite-sized quests for characters including Squidward and Mr. Krabs, can help those players stay on track with a simplistic mission structure, encouraging exploration rather than confining players to a linear path. Think of it as a precursor Super Mario Odyssey; players must explore and navigate locations in order to find a certain number of golden spatulas, therefore unlocking the next location. 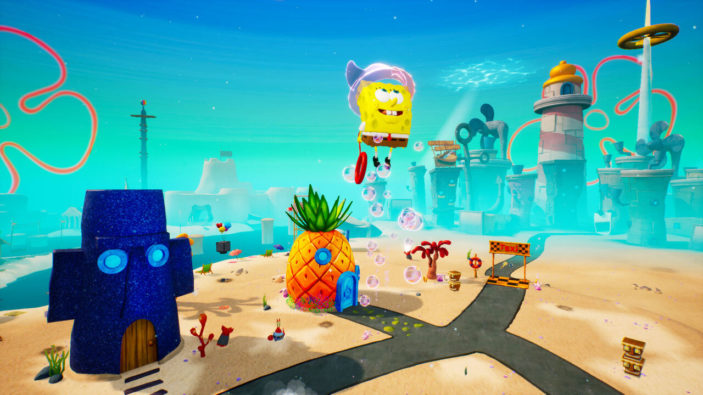 Battle for Bikini Bottom – Rehydrated feels more like a remaster visually rather than a remake. That being said, visuals this time around pop a lot more than they ever did, with each location falling more in line with an accurate representation of the show, which features brights pinks, greens and yellows at every turn. Pair this with the fact that dialogue is performed by each of the original voice actors, and it’s clear that Battle for Bikini Bottom – Rehydrated nails some sense of authenticity. While it’s not obvious, I can also appreciate the light texture work given to each of the three protagonists, which doesn’t seem necessary but ultimately makes sense, given the three dimensional nature of the game compared to the show. As I reviewed this game on the PS4 Pro, it’s also worth noting that performance was smooth and consistent across the board.

Down Here in the Deep Blue Sea

Unfortunately when it comes to structure, SpongeBob SquarePants: Battle for Bikini Bottom – Rehydrated is as repetitive as they come. While the locations themselves do a good job at breaking up the experience from a visual standpoint, many of the missions you will undertake feel largely similar, forcing you to scour each environment for the same collectibles, switches and areas of importance. In addition to golden spatulas, Battle for Bikini Bottom – Rehydrated tasks players with collecting what the game calls ‘Shiny Objects’ which look like little pieces of coral, acting as the game’s main currency, which can be used to unlock areas of importance. While this also encourages exploration, I found these objects incredibly easy to come by, minimising the motivation to pursue them in hard to reach areas. On the contrary, Battle for Bikini Bottom – Rehydrated does shake up the formula slightly with some memorable boss battles that take place at the end of each level. These battles play out similarly to any boss battles you would find in a 3D Mario title, in which players must find a way to attack and damage them a handful of times in order to defeat them. I appreciated the light puzzle solving elements that come into play here, which comes as a relief when the moment to moment combat is as bland and repetitive as it is. 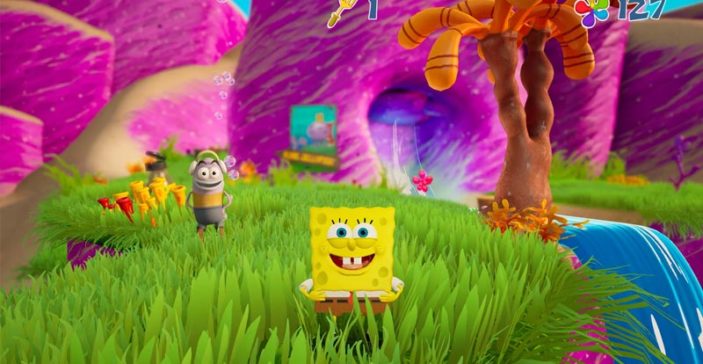 As combat plays a part in most modern platformers, I should add that I don’t expect God of War level combat systems; but I felt as though Battle for Bikini Bottom – Rehydrated missed out on some really interesting and innovative ideas to keep combat fun and varied, both mechanically and visually. While each of the the characters are equipped with main, aerial and projectile attacks, scenarios rarely encourage players to utilise various abilities, rather blatantly pointing out when and where they should be used. Some mechanics play out better than others, with Sandy’s lasso allowing for a greater sense of exploration and pace, as she swings and floats around the more vertical sections of each location. In saying this however, each level allows players to swap characters on multiple occasions. While you would think this adds to the variety, these opportunities are conveniently placed in locations where the level design intentionally changes in order to suit the abilities of a particular character, removing any of the incentive to experiment with character abilities.

F is for Friends Who Do Stuff Together

This time around, Battle for Bikini Bottom – Rehydrated features a cooperative multiplayer mode in which players can team up to take on various bosses that you would have faced in the single player campaign. With the choice of four additional characters including Squidward, Mr. Krabs, Gary and Robo-Plankton, each complete with original moves and abilities, you would be forgiven into thinking that this mode would extend the life of the game somewhat. While it’s not awful, multiplayer battles are largely inoffensive. Part of the appeal of boss battles in the single player campaign stems from the fact that they break up the monotony of the platforming segments. given that the focus has now shifted, these battles in turn become repetitive, and so the cycle shifts from fun to disappointing. 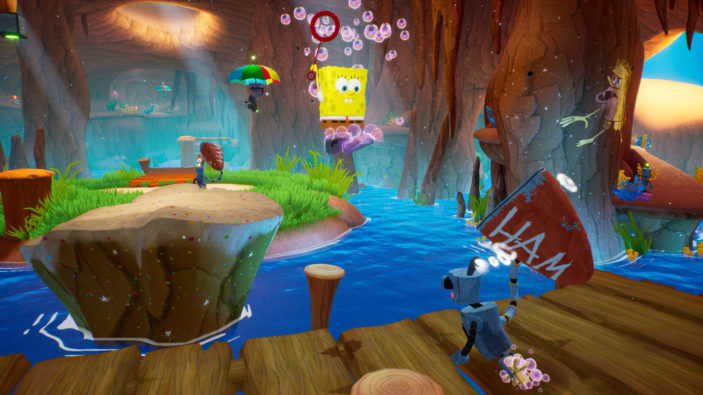 You might think I’ve been too harsh on SpongeBob SquarePants: Battle for Bikini Bottom – Rehydrated, but I feel as though this criticism relies on the fact that this game feels old. Controls are functional yet stiff, gameplay is tolerable yet boring, and the multiplayer mode is enticing, yet shallow. For what was once an acceptable entry into the platforming genre, has now been outdone by many too many remakes and remasters to count. While pretty visuals and authentic presentation may draw you in, I would only recommend this to younger audiences looking for their SpongeBob fix. But for those of us looking for a nostalgic return to a fondly remembered game, we may be better off looking elsewhere.