Ratchet & Clank Rift Apart Review: A preview of the generation to come 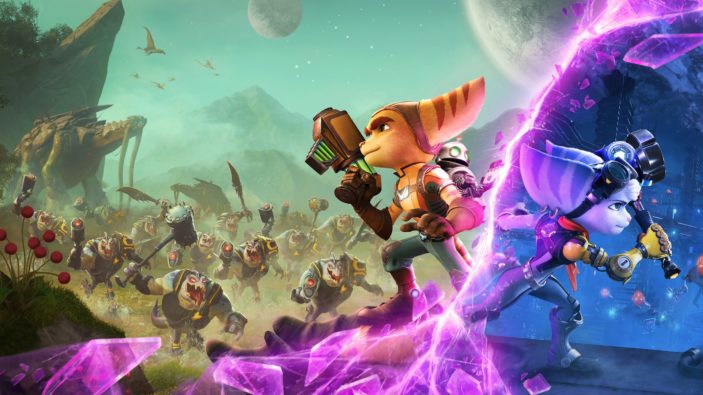 As a gamer in his late thirties, Ratchet & Clank Rift Apart makes me wish time travel was real. I’d rush back to find my 15-year-old self, show him these visuals and watch his brain meltdown in real-time.

Rift Apart is the sixteenth entry in the Ratchet & Clank series and is a canonical sequel to 2013’s Ratchet & Clank: Into the Nexus. Beginning with a huge parade for Ratchet (James Arnold Taylor) and Clank (David Kaye) thrown by Captain Qwark, Clank is excited to present Ratchet with a gift. It’s the Dimensionator, a device capable of open portals to other dimensions. As revealed in Into the Nexus, Ratchet is not in fact the last of the Lombax. Clank wants to present it to Ratchet so that he can begin the search for his family and species. Ratchet, quietly, isn’t sure if he wants to meet them or if he should leave it be.

Before any of that can occur, however, the evil Dr Nefarious (Robin Atkin Downes) attacks the parade in an attempt to steal the Dimensionator for himself. The Dimensionator is damaged in the fray. The malfunctioning device begins opening dimensional rifts throughout the universe at random. Ratchet, Clank and Nefarious are thrust into an alternate reality, one where Nefarious has conquered the galaxy.

A damaged Clank is scooped up by a female Lombax named Rivet (Jennifer Hale). Nefarious discovers his dimensional counterpart is absent and installs himself on the throne. Ratchet is stranded in a dystopian city on his own.

And so the stage is set for Rift Apart, the grandest R&C adventure ever made.

Ratchet & Clank Rift Apart‘s opening level, the aforementioned parade, is where developer Insomniac plants its rather spectacular flag. As the first true post-launch PlayStation 5 exclusive from an established first-party studio, Rift Apart has a few things it needs to do. 1) It needs to be a solid game in its own right. 2) It needs to be attractive to anyone who’s managed to get a console and wants something family-friendly to play on it. 3) It needs to be a visually spectacular showpiece. It should allow new PS5 owners to witness the might of their fully armed and operational battle station.

Rift Apart succeeds on all three fronts. The now-classic R&C gameplay hasn’t changed significantly in quite some time. Insomniac has perfected the game feel of its third-person shooter-platformer hybrid. Now gameplay design becomes a matter of messing with the form. That’s where the rifts come in. Pressing the L1 button on the DualSense controller will pull Ratchet or Rivet through any nearby rift, moving rapidly across the battlefield. This allows you to create or reduce the distance between yourself and your opponents, depending on the way any given combat scenario is playing out.

The PS5’s solid-state drive allows for an almost seamless transition through the rift, a blink-and-you’ll-miss-it frame hitch the only sign that the console was loading anything at all. This is true when the rift moves you around the same level or a different biome entirely. Even without knowing the moves Insomniac made behind the curtain to get the illusion to stick, it’s still one of the most impressive demonstrations of new tech in recent memory.

Indeed, the only area where the game seems to stumble at all is in the boss fights, and even then only slightly. The issue I had with certain boss fights was that, in its eagerness to put as much Stuff on-screen as possible, arenas became quite cluttered with enemies and a seemingly infinite number of effects and shaders. Even if the frame rate didn’t dip, overall readability in these moments did. It’s a minor gripe, and certainly beautiful to look at. But it’s also worth mentioning if, like me, scenes like these really set the old ADHD brain off.

If you’ll permit me to compare a console generation to a symphony, Rift Apart is a resounding overture. Beyond its confidence in itself and its own design, it weaves together the best of what the PlayStation 5’s hardware can achieve. In Twitter parlance, it understood the assignment — stand on your own but give a little preview of what the coming generation of games could be, too. Ratchet & Clank Rift Apart is a resounding success, a remarkable achievement, and yet another feather in Insomniac’s increasingly overflowing hat.

Highlights: Dazzling visuals; Rock-solid design; Play it with your kids
Lowlights: Some boss fights feel like there might be a little too much going on on-screen at once
Developer: Insomniac Games
Publisher: Sony Interactive Entertainment
Platforms: PlayStation 5
Available: Now

Review conducted on a PlayStation 5 using retail code provided by the publisher.