I’m going to level with you; this is my first foray into the Rainbow Six world, so if you are looking for an expertly crafted history of the franchise and its entries, this is probably not the review for you. If like me, you are intrigued by the introduction of monsters into this shooter that seems grounded in realism, this review will dive into my experience with the game and how this turned me into a Tom Clancy convert for the future of this series. Never let it be said that you were not warned.

This game is set in an alternate universe from the previous titles, and while the premise is as simple as point and shoot, it is now an alien race called the Archaeans who have invaded Earth and taken over cities, as opposed to traditional and smaller tactical settings found in Rainbow Six Siege. This time around, the assigned REACT (Rainbow Exogenous Analysis & Containment Team) agents must delve into the fray, eliminate as many of the aliens as possible, and take part in both research and extraction tasks in order to regain control of that region. While recent multiplayer shooters aim for run and gun experiences like Fortnite, Rainbow Six Extraction offers a much slower pace that may take a little getting used to, but when you do, delivers a unique multiplayer experience to help it stand out from the crowd.

Players team up in a group of three to head into different sites that have been taken over by aliens. Each area is separated into three different zones, and the more you progress, the more difficult each becomes. Each zone has its own set goals, so you’re greatly encouraged to explore different areas. The focus on exploration and scouting makes the takedowns even more satisfying. Each zone is vastly different from the one before. From the cityscape of New York to the mountains in Alaska, the large variety of other areas help each zone feel unique, showcasing the amount of care and detail put into each level. 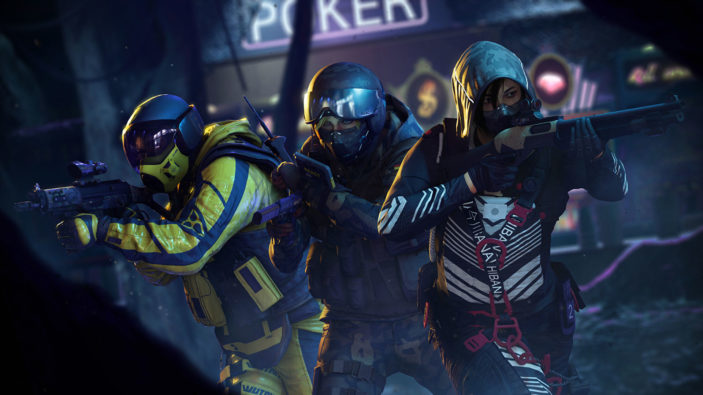 A Trip Into the Zone

Each area has a sub-zone in which you complete different challenges. The REACT progression system awards you bonus points that you need for upgrades, research, and purchasing new gear. Each character will have the opportunity to select specific equipment prior to each mission, from drones, to smoke bombs, flashbangs, and revival kits. This option also allows players to mix and coordinate their methods of attack, as the harder the game gets, the more important these decisions will become. All of this combined will give you the tactical advantage your team needs to take out the aliens as they are not messing around. The Archaeans are violent and ruthless in their killing. They have different abilities that will surprise you every time. Some of them hurl projectiles at you, some saunter up on all fours and explode on you, while others have blades in place of limbs in an attempt to slice you to ribbons. Some even appear as dangerous blobs, bursting with ooze as you get close, reincarnating quickly, making it near impossible for you to pass. It is genuinely terrifying and the biggest surprise of the game for me. Oh, and did I mention they can respawn? There are little pods that spew out more aliens, so be sure to destroy these as quickly as you can to alleviate the difficulty of an objective.

In terms of gameplay, Rainbow Six Extraction requires a tactical approach. You can send in a sentry drone to scope out the area and see how you get to your objective with as little (or as much) alien interference as possible. In your first 10 hours, this is essential as your health gauge is quite small, and the ferocity of the aliens leaves you with little to no chance of making it to your goal, should you wish to run and gun. You can combat this by coordinating approaches attacks with your teammates (a headset is an absolute must) In addition, purchasing AI assists like sentry guns and various motion detectors placed smartly, are the key to getting through each area relatively unscathed. 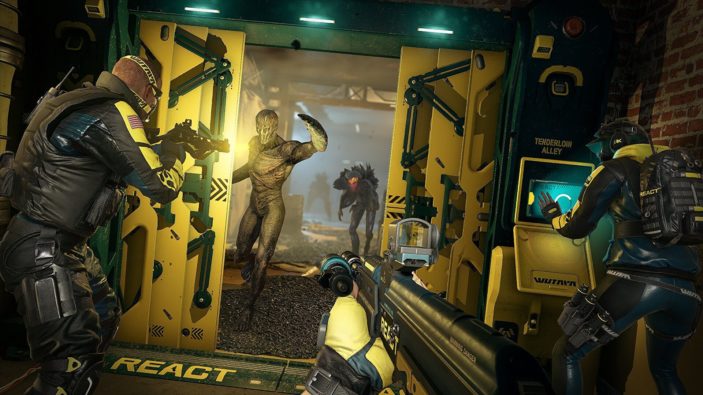 Leave No One Behind

Perhaps one of the more unique and exciting parts of the game is how it deals with fallen teammates. The hoard of Archaeans suck you in, and trap you within a cocoon, as your teammates attempt to carry you successfully back to the extraction zone; if unsuccessful, your player is temporarily removed from the roster. You must then re-enter the level as a different character and try and free them from the alien parasite. Its utility adds another level of gameplay in terms of both risk and reward.

A lot of detail has been given to the various objectives. You are rescuing trapped civilians, investigating the Archaean biology to uncover more about them and develop more effective weapons against them, clearing out entire units of aliens, and stealthily taking out the prominent leaders to send the rest into a flurry of confusion, making them easier to take down. This all combines with the eery soundtrack and beautiful visuals with a playtime of 20 hours (and counting), which I’m sure will increase as the game launches, and more of my friends can jump in.

This game offers a thrilling shooter with an extraterrestrial twist boasting gorgeous graphics, a soundtrack that is tense while supporting the terrifying atmosphere as you wait to be ripped apart by the Archaeans who refuse to let go of their territory. This game is best played with one or two friends, as long as you can communicate and plan well. Otherwise, you can strike up a game with a random and see how your luck fares. Ubisoft should be applauded for something different and coming up with an inventive and intelligent shooter I can’t wait to keep playing. Now standby for extraction.