Rainbow Six Extraction Preview: Get to the choppa’

The next entry in the wildly popular Rainbow Six series admittedly feels like untapped territory. For a series built on realism and the nature of a tactical approach, I was excited to experience that same level of tension and pace against a new alien threat. Our hands-on preview of Rainbow Six Extraction unveiled a number of detailed looks at maps, characters and objectives within the upcoming tactical shooter; and we’re impressed.

Rainbow Six Extraction pits players against the Archæans, an extra terrestrial threat that has spread throughout the U.S. You’ll take control of the Rainbow Exogenous Analysis & Containment Team (REACT) as you trek through hostile environments, completing a number of objectives from the likes of rescuing team mates, to cleaning out enemy hives. We got to take on the Archæan threat across two distinct zones in New York and San Francisco, with each zone containing three separate maps. From the get-go, each map felt diverse and noticeable larger than any of those featured in Rainbow Six Siege. While you could argue the point of Rainbow Six Siege revolved around specific encounters, the open-ended nature and larger scope of Rainbow Six Extraction’s plot can be felt here.

You’ll head into each map in teams of three, tasked with a handful of objectives that must be completed in a specific order. These objectives include sneaking about enemy infested areas to destroy hives, conduct research by scanning enemy pods and rescuing fallen teammates. As the title suggests, each map will usually end in teams rushing towards the extraction zone in order to complete the mission. The variety of objectives is diverse enough, but it remains to be seen just how these objectives play out across the different maps. Each map may lack the verticality of the double story houses found in Rainbow Six Siege, but I did enjoy the added sense of exploration and navigation that also plays into team chat and new combat opportunities.

Archæan enemies are quite clever, and will make life harder for you at every turn. Thankfully, this wide range of both enemy abilities and encounters encourage you to keep your wits about you. While the increased sense of pace and action may draw some more casual fans into its gameplay loop, you’ll soon find yourself pulling back, checking your corners and confirming approaches with team mates. Not to mention the number of enemy types on display here. The Sower will sneak about and set traps in your path, the Tormentor will launch projectiles at you, the Lurker will strengthen the abilities of enemies around them, the Bloater will detonate a cloud of toxic smoke when in close proximity, and the deadly Apex can call upon other Archæans to fight by their side.

This sense of variety also greatly increases pace and overall tension. Sure, Rainbow Six Siege packs enough of it’s own close calls and deadly moments, but the grander sense of action is undoubtedly fun. As previously mentioned, you’ll still want to approach objectives tactically when possible. But for the most part, the proverbial will eventually hit the fan. It is in these moments that the tension reaches its maximum, as you scurry out into the open in a bid to escape the enemy and call for extraction, if all of you have made it out alive. If not, you’ll be able to collect fallen enemies and carry them to the Extraction Pod. Those left behind will unfortunately remain. This mechanics encourages a huge sense of replay-ability and purpose. Fallen enemies who remain will be unusable for a certain period of time within your squad.

Using certain operators will level up their stats, and gain them access to new loadout options and powerful combat perks. If you can’t reach or extract these fallen operators in a certain amount of attempts, you’ll slowly lose any progress you’ve made as their character level decreases. This creates a feeling of risk and reward, in which each attempt must be carefully considered, in the hopes your botched attempt won’t lose you another operator. Thankfully, the aforementioned pacing keeps things moving smoothly. While a successful mission may last anywhere between 20-30 minutes, you’ll always be able to jump back into the fray, keeping the feeling of consistent progression alive. While you’ll encounter the same enemies and objectives, no two runs ever felt the same as the stakes consistently change, between who’s available to you and who you wish to retrieve.

Players can choose from 18 unique operatives at launch, each equipped with their own specific weapons and perks. The majority of Rainbow Six Siege have returned, including favourites like Sledge, Doc and Pulse; however, their abilities and weapons are not lost on the new premise. While Pulses’ ability could track targets through walls for example, he can now track alien hives and movie enemies for other players.  Thanks to the steady stream of unlockable loadout options and statistical boosts to overall speed and armour, Individual character progression seems deep, but we’ll definitely need more time to see how that journey pans out. Playing through missions and objectives will also unlock REACT points, which you can use to purchase and unlock new equipment, including smoke grenades, recon drones, body armour and revival kits, in which two of each can be prior to each mission.

Finally, players will eventually get the chance to take on the Maelstrom Protocol, as teams compete for the highest score in weekly challenges and exclusive items. This is indeed Rainbow Six Extraction’s hardest mode, and one that requires both practice and team coordination in order to achieve any type of success. Teams of three will navigate through 9 sub-zones that get progressively harder; and we didn’t even scratch the surface without getting absolutely embarrassed. While this mode will seemingly serve as an endgame alternative of sorts, one can only hope that the severe difficulty and overall variety provide some sense of longevity within the fanbase. 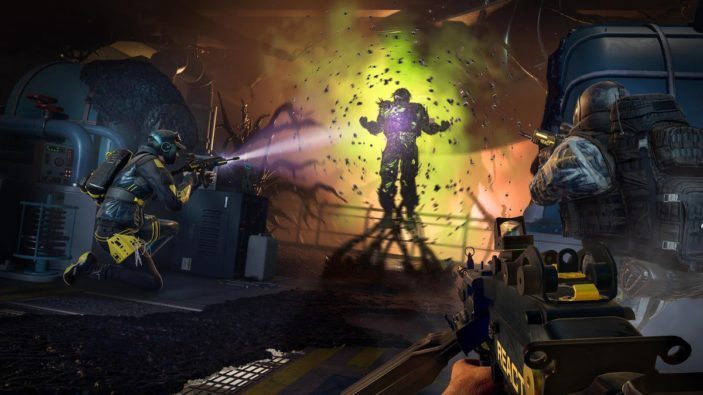 Overall, Rainbow Six Extraction feels incredibly promising. The same functional gunplay from Rainbow Six Siege returns, with a faster pace, revamped mission structure and larger maps. One can only hope that the PvP cooperative element carries the game in the long term, but from our brief hand-on session, Rainbow Six Extraction proved to be tense, tactical and fun romp through alien infested territory.