Rad marks another genre turn for developer Double Fine, the studio behind classics like Psychonauts, Grim Fandango and Broken Age. Inkeeping with Double Fine studio lead Tim Schafer‘s abstract sense of humour, Rad is an imaginitive, colourful and wonderfully wacky rogue-like dungeon crawler. Bursting with colour and character, Rad might not be the best game Double Fine has ever released, but remains an addictive feast for the senses.

Rad’s story is admittedly bonkers. The Earth has been nuked — twice. Most places now prove too dangerous for human beings to inhabit. So, naturally, a group of unique teenagers with attitude set out to cleanse the land of its radioactivity. The cost for doing so is not small — their own bodies become mutated and deformed, a process so normalised and ingrained that they all seem chill with it.

The less you dive into the lore the better, as Rad’s mad story is ultimately one of its weaker points. I’m not trying to knock it here — the story’s job is to provide the player with enough context and an excuse to venture out into the open world multiple times with a simple objective in mind, where things are considerably more enjoyable. 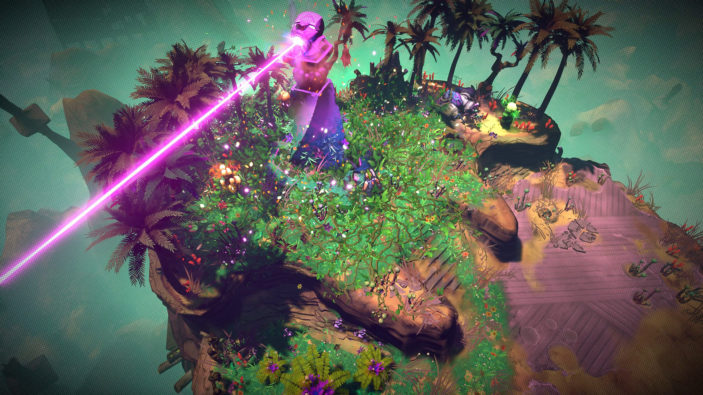 The visuals are just as bizarre as the story, but in the best way possible. I hope you weren’t sick of the 80’s cultural resurgence yet because Rad brings it back in force. Its neon aesthetic is consistently eye popping and lavish. The open world boasts an incredible range of flora and fauna to interact with, and it’s all gorgeous. This, paired with an awesome synth-based soundtrack, creates a deadly blend.

The gameplay embraces a traditional ARPG top-down view, it gives players a great look at each environment. Like many rogue-like experiences, each level is procedurally generated which means no two levels are alike. This makes Rad, like other rogue-likes, easy to learn but oh-so-hard to master.

Players are equipped with little more than a baseball bat,a single attack and jump button. This had me worried as button mashing seemed to set in relatively early, but upon discovering different uses and combinations including the ability to air kick, ground pound and lunge forward, I soon found combat to be a game of timing, precision and choice. 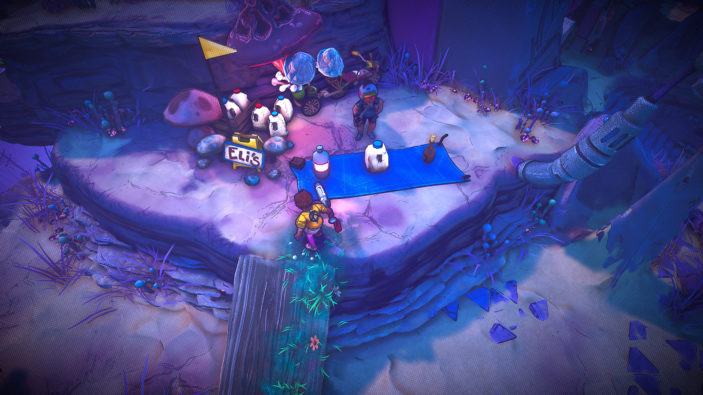 Players are also bestowed with mutations which act as special abilities. Able to wield up to three at a given time, players build a radioactive metre by defeating enemies. Once full, characters spawn a random mutation on their bodies, giving the player a superhuman ability. The abilities are varied and aesthetically bonkers, including spikes that extend from all sides of your body, to legs covered in green slime which leave a poison trail in their wake, to a small creature that latches onto your back which can be thrown and exploded at any time.

While these abilities are unique they are also acquired at random, meaning you might not see some abilities multiple hours in. I also found that some abilities were either way more useful or powerful than others, making these acquisitions a game of luck rather than an informed choice. It’s a shame because it only adds to the brutal difficulty in an unfair way.

Due to the rogue-like nature of the game, players are encouraged to persevere as each failure not only resets their progress, but allows them to unlock gear and abilities which help them progress further into the game. It’s very much the same in Rad, but with the randomly generated environments, enemies and mutations, I found some levels a breeze while others brutally unfair for no good reason. Each level plays out the same, with players having to find and activate two or more beacons  in order to unlock a door which holds the final boss. While each boss was varied, I found everything leading up to the fact was simply too unbalanced.

As previously mentioned, while random mutations could lead to difficulty issues in terms of being stuck with underpowered mutations, I also found that enemies were too tough too early on. While most regular enemies go down in three to five hits, some enemies had large health bars which took closer to twenty hits. When level 1-1 can take you five minutes to beat once, and twenty minutes to beat the next, it can become infuriating, particularly when it hinders your ability to see the rest of what Rad has to offer. 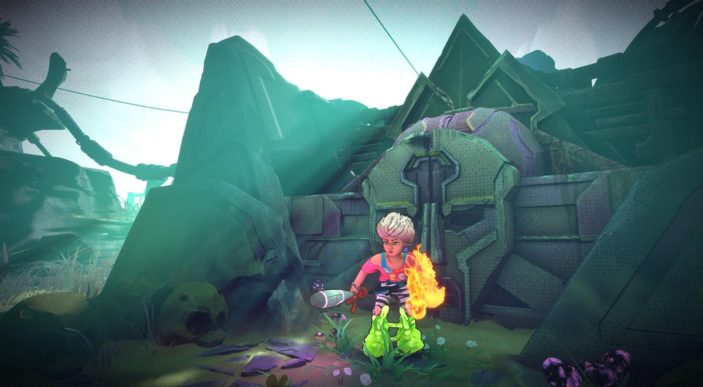 Overall, Rad is a genuinely beautiful looking experience that plays out well enough to keep the player invested in an admittedly short yet addictive gameplay loop. Rad is at its strongest when you’re graced with your favourite mutation and an environment which is easy to navigate, as levels can be completed in a breeze as you get a nice rhythm going. But procedurally generated levels, enemies and mutations really mess with the experience, causing huge difficulty spikes at random.

Part of me wishes this wasn’t a rogue-like experience, as I would have much preferred to play through this game in a more linear fashion, complete with a stronger story.  But at the end of the day, Rad knows what it wants to be, so here’s to the 80’s, may they remain totally radical in our hearts, for all time my dudes and dudettes.