Let me preface this review with an admission: despite my love for Pokémon, I’ve never played any of the Pokémon Mystery Dungeon games before. Rescue Team DX is a remake that combines the DS titles Rescue Team Red and Rescue Team Blue into a single package. Since I’ve not played them, it allowed me to go into this review with fresh eyes.

I didn’t know much about it other than it was that its a dungeon crawler where you play as the Pokémon rather than the Trainer. This is an idea that got me excited. I mean, who wouldn’t want to be a Pokémon?

Mystery Dungeon games start off with a short personality survey to determine which Pokémon you will be. If (like me) you aren’t thrilled with the Poke you are given, you can instead pick your avatar from a pool of 16 available monsters. I chose a Cubone (WITH A CUTE LITTLE SCARF!) From the remaining pool, you get to pick your two partner Pokémon and name them.

Your Pokes then wake up in the middle of a forest and the game reveals its first twist. You are a human trapped in a Pokémon body, with no memory of how this happened. Immediately after your introduction to your partner, you’re asked by a panicked Butterfree to help rescue her baby Caterpie. And so, your Rescue Team adventure begins. 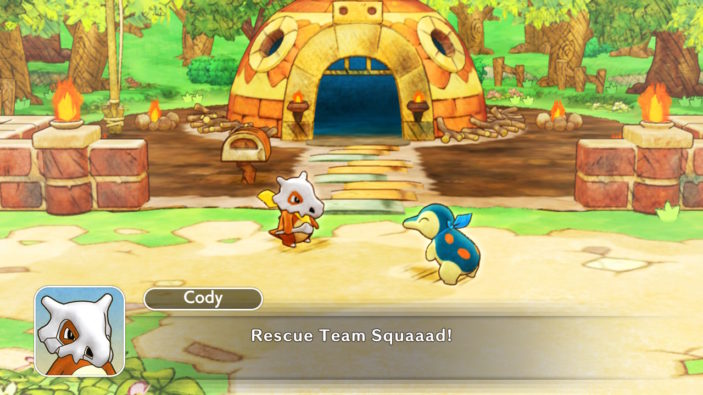 I Shinx, therefore I am

The general premise of Rescue Team DX is picking up rescue jobs either from your mailbox every morning or in town at the local Peliper Post Office, then going into the various types of ‘mystery dungeons’ that are randomly generated each time you go in to keep things fresh to rescue your fellow Pokémon compatriots. You can explore the dungeons even when you’re not currently on a mission there, which allows you to level up and gather items like Poké (money), Berries or Ether.

Of course as with any game, you will face foes – in this case, other Pokémon. What I enjoy about Rescue Team DX compared to other recent dungeon-crawlers is that this game isn’t a button-masher (unless you want it to be). As with all Pokémon games, you have only 4-moves with a limited PP (uses) but as you level up, you can learn new moves and sometimes your dungeon loot is a learnable TM. On top of that, it doesn’t take you ages to level up and you’ll have a generally smooth sailing ride through the story. 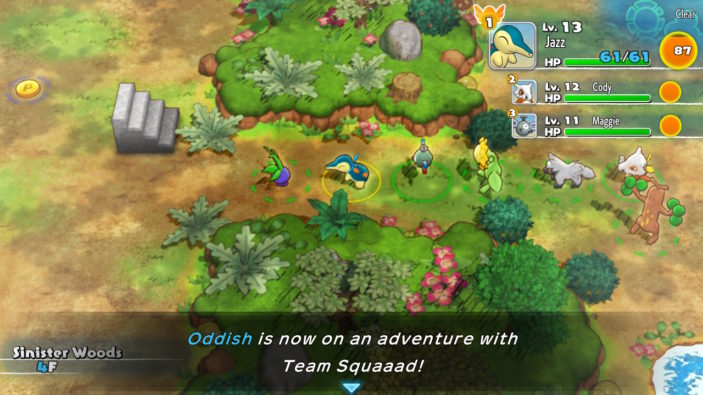 As you go along, you can recruit Pokémon that you meet (or defeat) along the way…BUT you have to make sure that you have the right type of Camp to house them, done by paying Wigglytuff to build them for you. You can still recruit up to 5 Pokémon as you venture through the Dungeons but if you don’t have the right Camp, they won’t be a permanent member of your Rescue Team

You have a Toolbag which acts as your in-game Bag. This has limited capacity, unlike other Pokémon games – any items you pick up after hitting the limit will be sent to the Kangaskhan Storage. You can use your Poké at the Kecleon Shop to buy items or TMs… or save them at the Felicity Bank to avoid risk of losing all your monies if you faint while exploring. If you don’t want to take the risk just to level up, the little town has a Makuhita Gym where you can level up your team members in exchange for Dojo Tickets or increase move PPs for free. 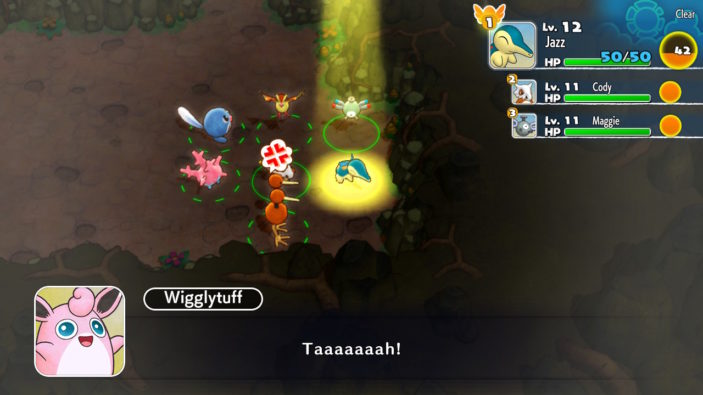 Between a Brock and a hard place

In terms of game design, there’s not much I don’t like. The artstyle is classic Pokémon with a little painted-filter on top. I absolutely love the sound design of this game. I actually found myself just listening to the music in various dungeons while writing this very review. Game on pause, of course.

I liked that the game let you use the Switch’s touchscreen to type in names but a bit of a shame that was where touchscreen compatibility ends. It would have been great to be able to sort other things out with it, like going through the Shop or sorting your Toolbox out.

The one thing I don’t like is the controls while you’re in a Dungeon – its pretty static and you move block-by-block which occasionally got a bit wonky for me. And yes, it seems to be only in the Dungeons that this gets turned on. It is pretty fluid otherwise. You also have the option to ‘auto-walk’ through like in a lot of mobile games, but I’ve never liked it so I’ve never used it.

I came, Ivysaur, I conquered

The Mystery Dungeon games really goes to show that the Pokémon Company isn’t just a one trick Ponyta. Most games in the Pokémon Spheal have you playing the Trainer-role but here, where you’re the Pokémon instead, is a refreshing thing to experience. As I went along, the game Growlithed on me more and more. It isn’t a perfect game, not by a long-shot – I think its still pretty damn good and it won’t Diglett you down.

…Okay I’m done with the Poké-puns now, I promise.

FOUR STARMIES (OUT OF FIVE)