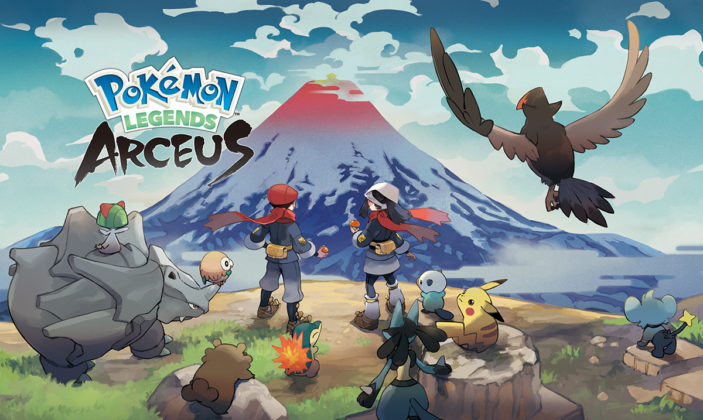 When Pokémon Legends: Arceus was first announced, I must admit that I was somewhat skeptical about it. What could The Pokémon Company and Game Freak possibly do with the Sinnoh region that we haven’t already learned by now?

Then, more and more information started to come out, and I became more and more hooked on the idea. Discovering a Pokémon region in a time before? Count me in!

You play a mysterious character, awakened by Arceus, who takes you through the character-building screen, as opposed to a traditional Professor. Your character comes from the future and is brought back to the past by Arceus itself for some mysterious reason. You do not know where you come from or why you’re in the past – you only have an “Arc Phone” to guide you.

Pokémon Legends: Arceus takes place in the land formerly known as Hisui – later to be renamed to Sinnoh – and your character is taken in by the members of the Galaxy Team who reside in Jubilee Village. But, the Village isn’t alone in the region. The Galaxy Team inadvertently became the mediator to the Diamond and Pearl Clans. They both believe in a deity of time and space, respectively – although they both call their deity “Sinnoh”.

While the story in itself is a little farfetched and some of its characters a little over the top, it quickly falls back into the recurring theme surrounding most Pokémon games. You, and only you, a mysterious stranger, can save the region with your incredible Trainer skills. The story itself gets a little jumbled, too. Although initially you’re meant to help Professor Laventon complete the first-ever Pokédex, it quickly morphs into a “you’re our only hope situation” – much to the dismay of some characters. 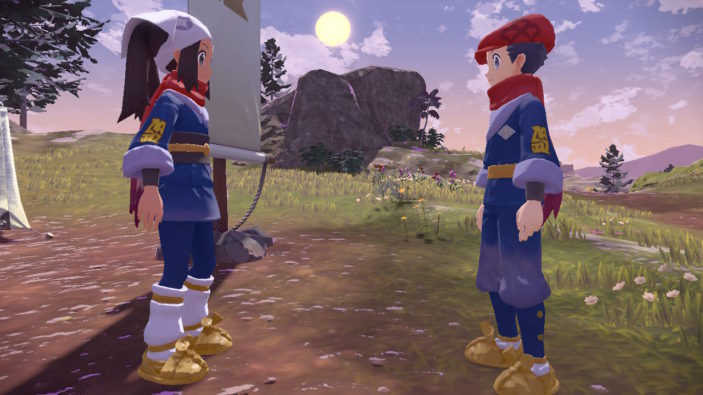 The gameplay of Arceus is honestly the only thing that keeps me glued to my Switch. It takes everything that we loved across the Pokémon series but adds a level of realism on top. Catching Pokémon is more akin to what you’d do in Pokémon Snap or Pokémon GO, rather than the main series of games. You encounter Pokémon in the wild, yes, but you’ll be able to see them on the fields rather than only engage them in tall grass. You’ll also be able to catch most of them outright rather than have to weaken them in battle.

Pokémon Legends: Arceus is set when Pokémon and humans have not yet learned to co-exist. The general human population is scared of Pokémon, and some Pokémon can and will attack you. As a member of the Galaxy Team’s Survey Corps, you are tasked to research, observe, and capture the Pokémon of the region and fill up your (very physical) Pokédex. And you’re incentivised to catch the same Pokémon repeatedly to fulfill quests and Pokédex tasks.

While this game has scrapped the gym system entirely, Game Freak replaced it with “ranks”. Although I’ve been fine with the concept of challenging gyms in previous games, this was an interesting twist to things that I rather enjoyed. Rising up the ranks of the Survey Corps allows you access to better Pokéballs, better relationships with your Pokémon, and the ability to explore more of the region. The more you complete your Pokédex, the higher up you go!

Despite only being “open world-esque”, the lands of Hisui are vast. Although you’ll eventually unlock Quick Travel, enabling you to get to Camps more quickly, it’s still a pain to travel from those Camps to where you need to go. Another thing that you’ll be able to unlock as you progress through Arceus is the ability to ride special Pokémon. Wyrdeer and Basculegion, both native to Hisui, can help you travel over land and water, respectively.

Your Pokémon will be able to gain XP by doing more than just battling, and that’s something I greatly appreciate. Any encounter with a wild Pokémon – whether in battle or just by catching them – will result in XP shared across your team. The one strange thing is that evolution needs to be manually enabled, rather than automatically occurring whenever your Pokémon hits the right level. You can throw their Pokeballs at trees or rocks to get items like Berries or various Stones, too.

Arceus also introduces the concept of crafting – allowing you to craft certain items like Pokéballs, potions and revives with things you find in the field rather than have to constantly travel back to Jubilife Village or a Camp to get more supplies. But, unlike most other Pokémon games, you have limited bag space, which you need to upgrade over time (up to 30 slots). With a physical Pokédex to carry, it’s no wonder!

Pokémon Legends: Arceus is quite simply a near-perfect Pokémon game, if I may be so bold. There are just so many things that Game Freak has gotten right this time around, and for that, I must commend them.

The only thing that kept me glued to my Switch was the gameplay dynamic. As I continued to play, the story lost its coherency, and I started ignoring cutscenes since quests would tell me what to do anyway. I enjoyed the “out in the field” feeling in Arceus, where you interact with Pokémon that you can see, which I felt was lacking in both Pokémon Sword and Pokémon Shield. The battle system received the refresh it so desperately needed in previous games – the entire Pokémon encounter system in general, in fact!

If this is the direction The Pokémon Company and Game Freak are going with their games, I’m all for it. Though…maybe tighten up the narrative and writing while you’re at it.

Review conducted on Nintendo Switch with a code provided by the publisher. Check out more of our video game reviews here.