Paper Mario has always been a hilarious spin-off to the beloved Mario franchise, though it did lose its way for a little bit. The Origami King brings the series that I love back from its papery grave and gave me so much more. Long story short, I’m a happy clam.

Paper Mario doesn’t mess around, trouble starts right off the bat. Mario and Luigi kart into Toad Town to celebrate the Origami Festival, only to find it completely deserted. What’s happened? Where are the Toads?

Waltzing into Peach’s Castle, you’re greeted by Princess Peach herself… Or is it Peach? She looks different – rather than her normal 2D paper-y form, she’s all folded up – and she sounds…scary.

Turns out that Mushroom Kingdom has been taken over by the self-styled “Origami King”, Olly. It’s up to Mario and his new friend, the origami fairy princess Olivia, to unwrap Mushroom Kingdom from the grasp of Olly’s streamers, rescue Toads and to unfold Peach from her origami form. And beat up Folded Soldiers and Paper Machos along the way.

I didn’t expect The Origami King to be as in-depth as it is. There are six vast areas of the Mushroom Kingdom that you need to unravel from the streamers, with plenty of Toads stuck in precarious positions that you need to save as you go along. Seems that every inch of the areas that you visit has a use – whether it’s the trees which you smash with your hammer to find Toads, or rocks that you smash to find Toads.

There are patches of the universe that have been ‘ripped’ away, exposing the scaffolding underneath which you have to use Confetti to repair. You can find Confetti by smashing basically anything you see – trees, flowers, long blades of grass. It’s not too important a feature, although occasionally you do need to patch a spot to advance in your adventures. This aspect is mainly for completionists, as it’s necessary for that sweet 100% banner and those short of Coin. 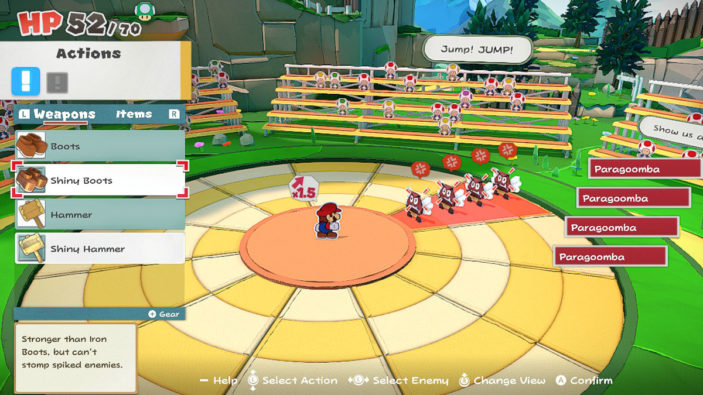 What I like most about The Origami King is the refreshed Battle system. In a nutshell, it’s a combination of puzzle-solving and classic “QTEs” where you have to move the battlefield around to line-up enemies before attacking them. If you line them up in the given amount of Moves, you’ll earn attack multipliers.

In the Paper Mario series, you have to time your A-button press to match when Mario jumps on or hits an enemy in order to inflict even more damage. The same applies to The Origami King, though you can rally the Toads you’ve saved along your adventure to help inflict damage or solve the next step to your battle puzzle…for the right amount of Coin.

You’ll start off with a basic pair of Boots and a Hammer, to jump and smash respectively. As you go along, you’ll find various ‘upgrades’ which do a lot more damage compared to the base versions, but the drawback is that they have limited durability. The temptation to only use the upgrades is strong though, so thankfully one of the Toads you’ll save is the Toad Town shopkeep – who’ll sell you the various weapon upgrades, healing mushrooms, as well as battle items like the Fire Flower or POW Block.

Boss Battles are slightly different compared to regular Battles. For one, you start from the outside and have to move inwards rather than go from the inside-out. Secondly, the puzzle aspect of Boss Battles requires you to line up movement arrows, power-ups and attack panels in order to attack the Boss. Some of these Bosses are minions of King Olly, but some are Vellumentals – who’s elemental powers you’ll need on your journey.

I’m not even halfway through the game yet, and I’m not at all bored. There is just so much to do…plus I’m a completionist, so I take even longer to smash through things to make sure that I don’t miss any Toad or Collectible.

Anytime I felt that Paper Mario might get a little monotonous, the game throws a curveball. Like a random minigame in the middle of a cutscene. It kept me on my toes, for sure.

And if I felt out of practice and want to get my attack timing just right, I could visit the Battle Lab in Toad Town after you’ve saved the relevant Toad to practice my Battle skills. Whether its Hammer smashing or Boots jumping or even Boss Battle puzzle-solving, you can hone your skills there. I absolutely needed to practice the timing of my Hammer attacks, I think that’s the toughest one to master, and I still haven’t mastered it…hours later. 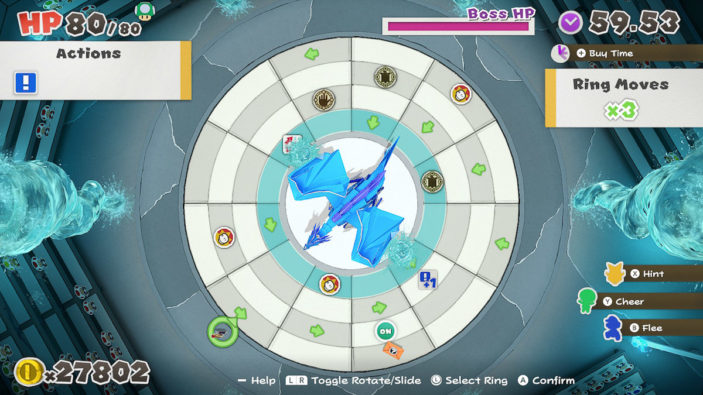 If there’s one thing I had to dislike about the game, it’s the lack of an auto-save feature. Your game will save when you go from one area to another, for example via warp tunnel, or after a cut scene. Otherwise, your game only saves if you hit the special rainbow ‘save’ boxes which sometimes can get scarce. Not great when you’re trying to get Stalk data for your personal AI project.

But if I had to be extremely picky, I would also have to fault the inability to speed-up conversations. Not that they were ever boring, it’s just that I read faster than the game ‘types’ a character’s lines out plus the speech of the Folded Soldiers are a lot slower. Since Paper Mario is majority text, I tended to find myself in a weird limbo-sort of situation. On the one hand, I really want to savour all the lines and absorb as much information my brain can. On the other, my brain struggles to retain the information because it’s coming in too slow.

And… That’s about it really…

Nintendo has taken Paper Mario and boosted the series 1000-fold, pun intended. I simply could not stop smiling!

Paper Mario is a great game that you can either breeze through, or take your time with, and if you need a break from Animal Crossing. The script is hilarious, the graphics are surprisingly detailed, and there isn’t a dull moment in the game. Most definitely my favourite game release thus far.