One-Punch Man: A Hero Nobody Knows Review: A Fair Fight

I remember the first time I saw the trailer for One-Punch Man: A Hero Nobody Knows. How is this ever going to work as a video game? I thought. Surely a game that features a hero able to defeat any enemy with a single punch would make for a pretty boring game. For the most part, it proved me wrong. One-Punch Man: A Hero Nobody Knows is certainly more than one hit KO’s — but not much more. Developer Spike Chunksoft’s return to the fighting genre is content with being a competent brawler with a self-aware sense of humour. That alone may be enough to please OPM fans, but I wonder if it has much more pull than that.

“If the heroes run and hide, who will stay and fight?”

So if One-Punch Man: A Hero Nobody Knows isn’t a montage of hero Saitama destroying his enemies in a single punch then what is it? A Hero Nobody Knows casts players as their own custom character. They have just entered the ranks of The Hero Association, a band of talented individuals tasked with keeping the streets clean and crime-free. The game uses set pieces from the show’s two current seasons to tell its story. Throughout, your hero builds their reputation by fighting alongside many well-known franchise characters. The downside to this approach is that your character never interferes with established canon, and it leaves you feeling like a bystander rather than a key player. What makes this approach even stranger is that the game’s many customisation options allow you to make your character stand out in a crowd. Further customisation options present themselves throughout the story, allowing you to create the loudest wallflower in video game history.

Gameplay is divided into exploration and combat. Overall story progression expands the size of the local city, opening new avenues for exploration. While the city is detailed and quite large once unlocked, it’s curiously devoid of civilian life. Indeed, the only remaining people are quest givers. As a result, the city doesn’t feel lived in, but more a series of set paths leading you to the next battle.

Combat, on the other hand, is the most detailed and satisfying aspect of the whole experience. 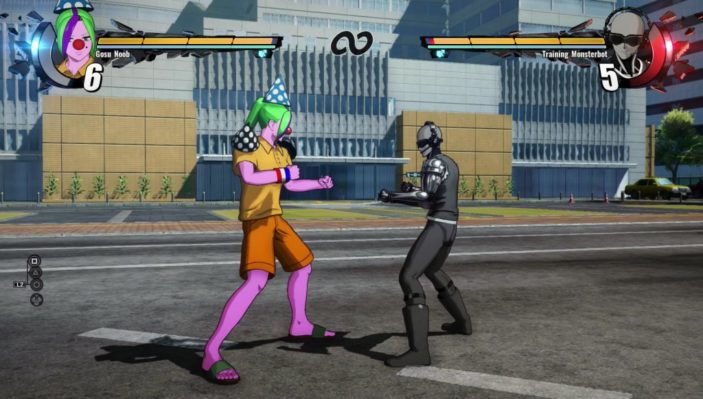 Your character has an array of light and heavy attacks they can use right away. This flies in the face of the game’s title — quite apart from there being just one punch, there are a great many to learn. This presents a somewhat steep learning curve as you learn to juggle these moves all at once. The game employs an over-the-shoulder perspective where players can move around a three-dimensional arena, akin to last year’s Jump Force. While button mashing can get you moving, you’ll soon find that pre-determined combinations and strategies will help you overcome most opponents. This is especially true in the late game when most enemies are much stronger than you are.

Thankfully, your character is soon fighting alongside multiple characters from the show, each with their own unique moves and abilities. This tag-in mechanic adds needed depth to each encounter. Switching between these characters is seamless and intuitive. Heroes can be summoned with a single button press. Calling upon them during combos is perfect for dealing a little extra damage. Building a little team of heroes is fun and the game takes the time to introduce them one by one. The only thing I’d ask for more of is enemy variety. Most enemies beyond the main cast are simply random thugs and trainer robots. 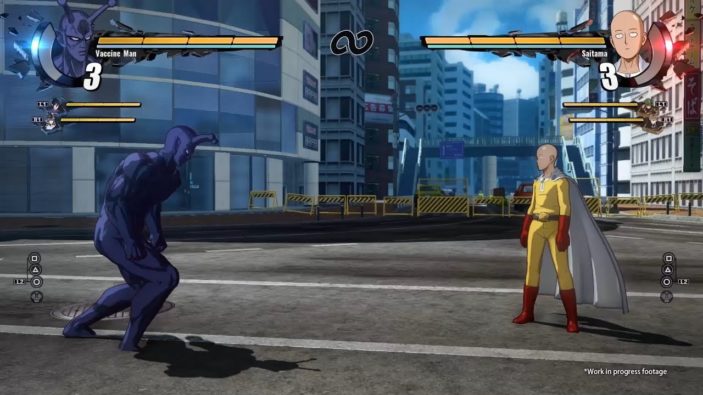 While Saitama himself is a playable character, he appears much less frequently than all the other fighters. You can view this creative decision one of two ways. First, considering his name on the box, it’s a shame that Saitama isn’t a more prominent figure. Secondly, his encounters are memorable and incredibly, predictably one-sided. Saitama can actaully defeat any enemy with one punch, but his appearances are to help propel the narrative forward. Fights otherwise introduce complications to help keep things interesting, things like natural disasters or the introduction of an incoming ally. This keeps you on your toes and isn’t used frequently enough that it comes to feel like a gimmick. While the structure of the game itself can become repetitive, the act of trying to avoid a meteor shower as you hold out for an ally to reach the battle is incredibly fun. Multiplayer also boasts local and online modes, allowing players to pit three of their favourite characters against each other.

Overall, One-Punch Man: A Hero Nobody Knows is at its best in the midst of the brawl. Crazy battles complete with tense real-time scenarios to keep fights engaging. The combat presents a steep learning curve, but soon opens up to some fun and satisfying bouts, particularly when other heroes are involved. The story keeps things moving, but inelegantly wedges your character into moments they have no business being in. Repetition does set in later on, the game’s exploration amounting to little more than a box feature. One-Punch Man: A Hero Nobody Knows is competent at best, but will most likely be forgotten by anyone who isn’t a fan of the show.