The Need for Speed franchise is much as a staple of the racing genre as any other. From the high octane thrills of Hot Pursuit, to the halcyon days of Underground, and the epic, white-knuckle police chases of the highly regarded Most Wanted. A few rocky and undercooked entries have plagued the series in recent years, but NFS Heat retains much of what made the franchise so memorable and lasting. It may not reinvent the genre the helped cement, nor meaningfully reorient the franchise’s trajectory for that matter, but it does present fun gameplay married to an intriguing structure. It finally feels like Need for Speed is back y’all.

Reluctantly crouched at the starting line

NFS Heat brings the franchise to Palm City. A location that riffs on the city of Miami as much as Los Angeles, I found it to be a location that lends itself to things fans respond to: pretty views, vibrant colours and intriguing nightlife. NFS Heat reminds me of the old days, in that it’s instantly accessible and happy to bend the rules in favour of fast and frenetic gameplay. It’s akin to what you would see in something like the Forza Horizon series, an even balance of arcade fun against realism.

NFS Heat centres on a story about a racing tournament (another FH nod) that is average at best. It borrows from all over the place — Fast and Furious, cop movies, you name it. Players choose from a lineup of pre-made characters, all looking to rule the street racing circuit. As you can imagine, the Palm City police force don’t share these goals, and scour the city streets in an attempt to bring your rise to an abrupt halt. The story isn’t deep enough to carry the experience, and while a few cutscenes occasionally bring out a witty line or two, you’ll most likely be using the narrative as a crutch to navigate from race to race. 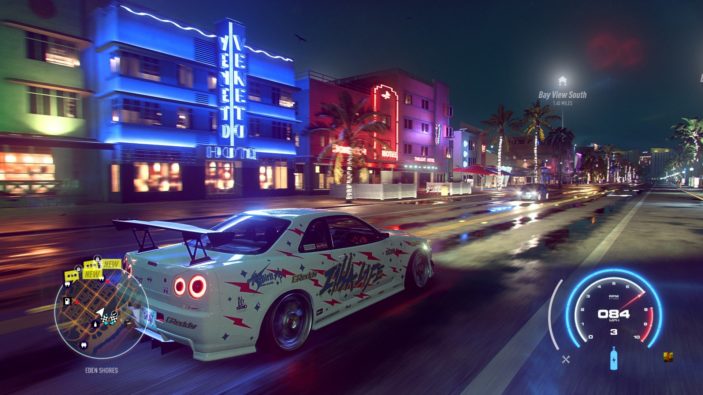 Engines pumping and thumping in time

But when it comes to racing, NFS Heat really does shine from all angles. If you’re a fan of simulators such as GT Sport or Forza Motorsport, you must understand that NFS Heat is nothing like either of these examples. Racing is fast-paced and consistent, and while cars control with a sense of weight and responsiveness, you are strongly encouraged to push each session to the limit. Cars swing around corners with ease, even at top speeds. I can’t really pick on NFS Heat for this, as it presents its mechanics in such a way that feels so satisfying time and time again, even multiple hours into the experience. NFS Heat knows what it wants to be, and that, it most certainly is.

Bouncing off its gameplay, is the equally impressive structure NFS Heat balances its races within. You’ll find yourself racing day and night (literally) as races are divided between both times of the day. Day races allow players to take part in legitimate events, earning truck loads of cash in the process, allowing you to modify, purchase and upgrade your vehicles. However, night races allow players to earn reputation points. Both are needed to advance through the story, and while the choice is all yours, the game does a great job at throwing you in and out of each events throughout the day.

The green light flashes, the flags go up

Night races provide most of the fun, as the cops come out to play. The police will roam the streets each and every night looking to intercept illegal street races, and boy do they pack a punch. The police in NFS Heat are a force to be reckoned with, as they can advance on you at any point of your nightly run. Be it during races or as you’re simply exploring the open neon-lit streets of Palm City, they will attack in numbers, and only become increasingly aggressive as you try to wipe them out. They can however, be evaded by avoiding their line of sight for a small period of time. But when it comes down to it, your best bet is to escape, as fighting them off and increasing your heat rating can lead to incredible difficulty spikes where you basically minimise all chances of escaping.

It’s worth mentioning that while night races accrue reputation points, these points can roll over as long as you choose to stay out and race. Here, you can either risk it all for multiple races in a row for all the reputation points you can handle, or call it safe and rush to a nearby safe house to end the night. Being caught however, will result in you losing everything you had gained on that particular night. 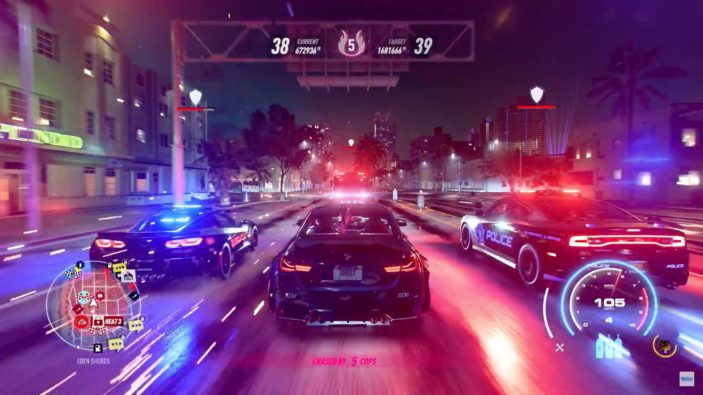 With so much to do throughout the day, you would be glad to know that NFS Heat gives you more than a few cars to do it in. With almost 200 cars to choose from so far, you’ll find yourself racing over and over again to unlock some of the most deadly and iconic vehicles in today’s market. Be it an Accura NSX (known as the Honda NSX for us Aussies), or my favourite car of all time, the Aston Martin DB5, you’ll be trying on a few fits to see just how far you can push the concept of speed. And trust me, here, you can push it pretty far.

Churning and burning, they yearn for the cup

Cars are also customisable both inside and out. Here, we’re treated to a more traditional upgrade system where parts are purchased outright; a huge step above the loot box, card infested rubbish that was Need for Speed Payback. As an added bonus, players would also be glad to know that not a single micro transaction exists in NFS Heat. While I wished for more customisation, things are kept simple for the purpose of remaining accessible, and that I can respect.

Thankfully, NFS Heat brings online play to the entire experience, creating a shameless world where players can interact at any given time. It’s a neat idea, as I find traditional seperate online modes rather bland in racing games. Unfortunately, I found myself struggling to find players to race against at certain times, instead opting for solo play, which is also an option, and a handy one at that. If your internet drops out, so will your session, so opting in for solo play from the beginning at the main menu might prove worthy for those looking for a more stable solution.

NFS Heat rounds out the experience with some polished visuals, but nothing you haven’t seen before. The city itself looks amazing at night thanks to some fantastic colour coordination, but I did find textures popping in at odd and random times.

Overall, NFS Heat is a worthy addition to the Need for Speed franchise. Picking at some of the more successful and popular ideas of the past two decades, NFS Heat feels like a greatest hits for the franchise, combining an extensive playground with fun and addictive mechanics. The story might be a little thin, but it rarely interferes with the racing experience, which kept me rolling long after the story had ended. Welcome to Palm City. Try not to stay out too late.

Review conducted on PlayStation 4 with a physical retail copy provided by the publisher.