Mario + Rabbids Sparks Of Hope Review: Back and Better Than Ever

Who knew that combining the nostalgia and platforming fun of Mario games together with the whacky world of Ubisoft’s Rabbids would work? 2018’s Mario + Rabbids Kingdom Battle still stands as an essential staple of the Nintendo Switch system. A classic turn based strategy game that successfully fused the worlds of Mario and Rabbids together sees developer Ubisoft embrace what made the first game great, yet pushing it further with a wider range of options in terms of gameplay, a larger world to explore and and a story that’s easy to follows, yet serves to evolve the franchises’ lore for a fresher feel.

Mario, We Need Your Help!

This time around Mario, Princess Peach, Luigi and their Rabbids counterparts respond to a call for help when an alien space monster attacks and starts capturing Spark creatures. The evil creature Cursa is creating minions in an attempt to capture all of the Sparks to control the universe. The six heroes in question are joined by new playable characters Bowser, Rabbid Rosalina and a new original character Edge. The constant influence from the Super Mario Galaxy games is clearly evident in this long-awaited sequel. The comedy is still as silly and slapstick as the first, though some some might argue it has been turned up a few notches this time around in terms of frequent jokes, some oh which don’t always land. However, when combined with the engaging turn-based combat and free-play exploration, an already stellar game series has been turned into a truly memorable masterpiece that propels the series forward in new and exciting directions. 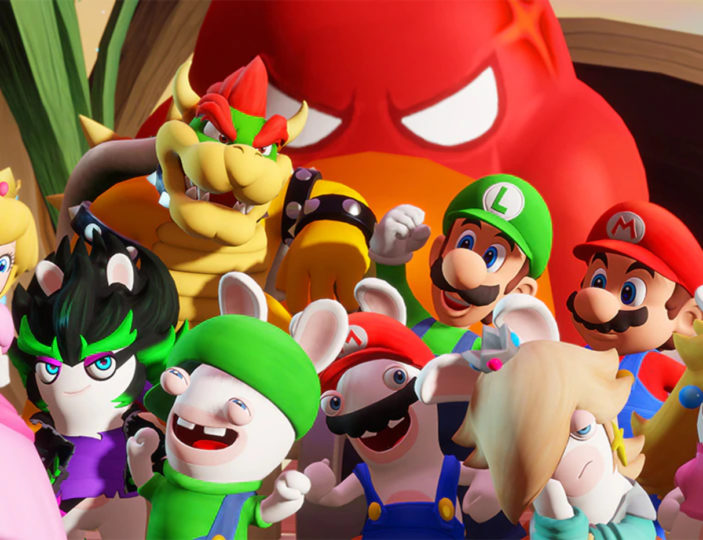 The biggest change this time around is the free range of movement your characters can have in combat mode. You are no longer bound to a grid and can quite easily navigate your characters around to best take down your enemies as quickly and effectively as possible. It was a welcome improvement from the previous title and players can use additional moves like Team Jumps to help different characters in your team move about the map. You can also Dash which allows you to barrel through enemies, all while dishing out damage without taking up a turn. You can now also use Sparks to boost your abilities and shots. As functional as the majority of the gameplay is, there were certain instances where large walls and blocks made free play and aiming feel incredibly difficult. It may have felt little more irritating than the previous game, but only took a few turns to get the hang of it and it, eventually adding a layer of complexity to combat.

With no playable Yoshi in sight, the addition of Rosalina and an original character that looks straight out of a JRPG game, did their best to make up for this. Each of your characters can have Sparks equipped to their abilities and an active ability that can be Freeze or Burn which improves your attacks. Characters gain Skill Prisms, which have several skill trees that can each be upgraded. These all have the expected focus on health and the special characters abilities, but only add depth to combat. I had an incredible amount of fun matching my character’s special ability to the battle and enemies in front of me and this kept the game feeling fresh. Weapons are also a huge improvement over the last title with a fully loaded arsenal on display here.

Each battle sequence felt unique, mainly due to the removal of the rather constrictive grid from Kingdom Battle. Being able to move around characters before making your move makes the battles feel fluid and incorporates well with the freestyle, open-world exploration outside of combat. Being able to pick up the Bob-omb’s and obliterate enemies around without needing to use up all of your action shots is no doubt my favourite part of the battles. There are a couple of big bosses to get through and as the soundtrack swells and a few surprising twists keep things interesting, it is clear that the developers knew exactly how to enhance the franchise. 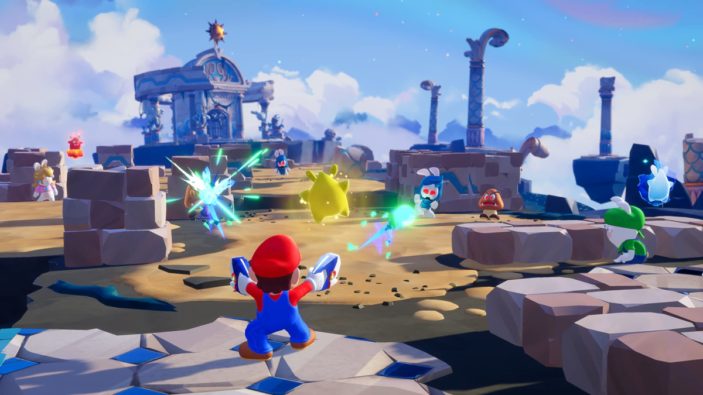 It’s no secret that the Nintendo Switch is aging and its limitation on graphical capability is ever-increasing. Fortunately, Mario + Rabbids Sparks of Hope avoids this concern as it looks in line with other Mario 3D titles released recently on this system. All of the character designs are intricate and I found myself playing as Rabbid Mario over and over due to his entertaining design and high-pitched “Mamma Mia” that kept me entertained during my playthrough. The level design is much more detailed this time around with many collectibles and coins hidden throughout each area, encouraging a broader sense of exploration. The first game felt very battle heavy, while exploration now feels adequality balanced and rewarding as a result. Ubisoft and Nintendo clearly took their time in carefully crafting this sequel. While that length of time may have been felt by fans, has ultimately translated to a rewarding and satisfying instalment of a now confident franchise. Improved battle mechanics and controls makes boss battles easier to contend with, while a broader sense of exploration enhances overall variety and depth. The gorgeously detailed graphics and soundtrack also keep the game looking fresh on the aging Nintendo Switch hardware, both relevant in terms of look and feel in 2022.

What once seems like such a simple game and premise has evolved into something much more complex and engaging. Taking these beloved characters and fusing them together to create a memorable franchise is no easy thing to do. But Sparks of Hope brings all of these elements together to create a resounding win for the franchise and ageing platform alike, as one of the best games of 2022.