A no-show in the Wii era, I warmly welcomed the announcement of Mario Golf Super Rush for the Switch. And now, at long last, a Mario-themed golf-sim with motion controls. Finally, Switch owners can enjoy a pseudo-realistic golf experience in the comfort of our homes — without having to brave the heat of the sun or even move our legs.

Its launch is perfectly timed for the Georgian summer season that I’m living through right now. It’s currently 37ºC outdoors. I don’t want to go out in it at all, much less play actual golf in it.

It’s been quite a while since the last instalment, so, unsurprisingly, Mario Golf Super Rush features a lot of new material. From an all-new adventure mode to Battle Golf, this entry works hard to keep the Mario Golf series feeling fresh and dynamic.

Mario Golf Super Rush is the first in the series to include motion controls. Nintendo first used this tech the Golf game included in the Wii Sports package. The feel is fairly similar — if you played a lot of Wii Sports Golf, you’ll be right at home. Though I personally find the motion controls fiddly, I am willing to suffer through them for the sake of variety. Any game that lets me make full use of my Joy-Cons will most definitely get recognition from me.

One of the most welcome changes Super Rush makes is to the shot gauge. Rotated from horizontal to vertical, the shot bar now provides a lot more information about your shot-in-progress. A stroke impact zone at the top indicates when you are kissing that egg a little too hard. The bar now visually bends to represent the amount of curve on the shot. This is UI design par excellence. Simple, smart, readable. This, coupled with wind direction and airspeed, is very important information to have and be aware of. Kudos for extra realism!

However, the fiddly motion controls aren’t the best choice when playing Speed Golf. Super Rush‘s Speed Golf mode is essentially the golf equivalent of Mario Kart — everyone tees off at the same time, then race to their respective balls after each stroke. You have access to special shots and dashes to try to gain an advantage, each with its respective gauges. You need to quick, and that means you might be better on the Joy-Con buttons or the Pro Controller.

Super Rush also introduces Battle Golf, a mode not dissimilar to Capture the Flag. And it is intense. Pitted against three other players, the first to hit their ball into three holes wins. You must do this while avoiding various obstacles and other players, who want you out of the running.

Working on that backswing

While Advanced Tour on the GBA had an “adventure mode” of sorts, Super Rush has a fully implemented Adventure Mode campaign. This mode lets you take your Mii from entry-level rookie to the Mushroom Kingdom’s most beloved pro golfer. Although the other 16 playable characters have varied stats to suit different playstyles, it felt great to build a character and style entirely my own. That said, the campaign is long, perhaps too much so, and it’s easy to be frustrated by the harder, later courses.

In terms of story, it’s much the same as the old Advanced Tour campaign. What makes Adventure Mode stand out is that, from time to time, it will throw in a round of Speed Golf and Cross-Country Golf.

Speed Golf already turns the stress levels up a notch. It’s frantic enough as it is but then worsened by odd design constraints like what seems to be normal terrain being completely impassable. Cross-Country Golf turns that already hectic scenario up to eleven. Cross-Country’s demands are steep. You have to sink a certain number of holes within a set number of total shots. On top of this, you have just two minutes to both hit and reach your ball. This might not seem steep, but when every stroke matters, the impulse is to take as much time as possible. Oh, and there are obstacles that you need to avoid as well. Stressful is an understatement.

In the end, Adventure Mode is great for getting the hang of basic controls. Unfortunately, Adventure Mode is also the only way for you to unlock different playable areas. If you want to play courses the Rookie Course or Bonnie Green, you have to chew through Adventure Mode. And I would genuinely have been fine with this if it wasn’t so time-consuming. Why there isn’t another way to unlock courses is beyond me. 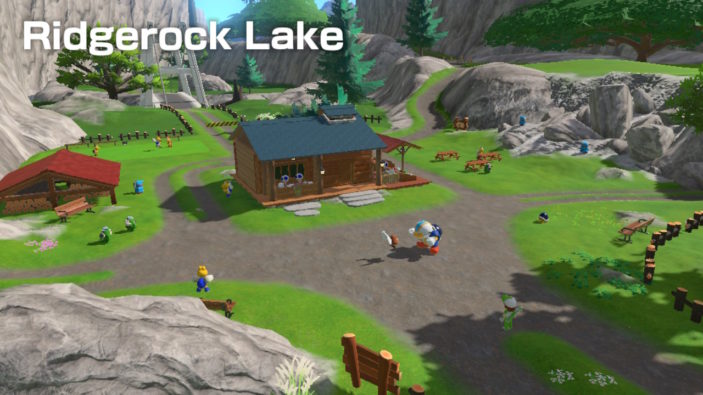 Mario Golf Super Rush is all fun and games right up until the moment you are reminded that this is, indeed, a Mario sports game. By now, it’s a classic arc. The gentle learning curve abruptly giving way to a set of crazy challenges that make you feel like it barely taught you anything.

It takes “practice makes perfect” to another level. That said, I also feel like Mario Golf is the least frustrating of all the Mario-spinoffs. Its ability to end lifelong friendships in an instant, something Mario Kart and Mario Party excel at, isn’t as pronounced.

I would be much happier with the game overall if it hadn’t forced me through Adventure Mode to unlock more courses to use in regular play. This design decision has an unpleasant knock-on effect across the rest of the game. I’m perfectly fine with all its other frustrating aspects. I can live with them. That frustration is part of the Mario sports experience. In a way, I feel like I live for that frustration. But forcing me to run through a lengthy campaign just to unlock extra courses? It’s a bad call, and something I hope Camelot will remedy post-launch.