The Mario Party franchise has long established itself as a ruthless destroyer of friendships. From its earliest, controller-ruining days on the Nintendo 64, the series has sought to emulate the classic board game shenanigans of something like Monopoly. But, like Monopoly, a core part of its design involves regularly screwing over anyone unfortunate enough to play with you, and doing whatever it takes to secure a win. Beneath its adorable, squeaky-clean Nintendo exterior lies one of the most cutthroat multiplayer franchises ever devised.

Super Mario Party sees the denizens of the Mushroom Kingdom coming together for a bit of a festival. Because of its party-based design, the game doesn’t need an especially deep story and so everyone, good and bad, is sort of plonked in together. The standard Mario Party game mode sees up to four players making their way around a themed level, or “board”. Each board is laid out in the style of a board game with a series of pathways connected by individual tiles. These tiles are how players move about and how the game is able to mess with them. 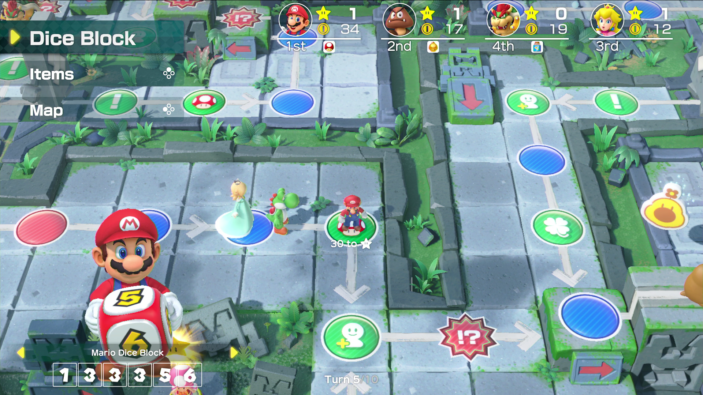 Players roll a single die — either a standard d6 dice block or a character-specific d6 dice block that features augmented results. These modified die range from what could be considered a safe bet (sides reading 1, 3, 3, 3, 5 and 6 as pictured above) or risk/reward (-2 coins, -2 coins, 3, 4, 7, 7). Each character has their own modified d6 and some are wildly better than others. These die can be modified with items like Speed Mushrooms that add a +5 or +7 to your roll, or through Allies, a mechanic that drops a second Super Mario character into the game to tail you, adding a +1 or +2 to all your rolls. The idea being: try to work the numbers however you can in order to land on squares that benefit you most, a feat much easier said than done. Beyond all the modifiers and booby traps, the only way you’re getting around that board is through pure RNG — good old fashioned random number generation — which, as any Dungeons & Dragons player can tell you, often means the dice being very cruel to you. Super Mario Party is no different — the dice giveth and the dice taketh away.

Players are charged with collecting two kinds of currency — coins and stars. Coins are relatively easy to obtain and are collected from landing on certain spaces on the board and from winning different mini games. Stars are collected by reaching Toadette, who hovers around the board and urges players to chase her down. There’s also the upending of the scoreboard during the end-of-game awards ceremony, where stars are arbitrarily doled out for hitting milestones no-one knew they were competing for like “longest distance traveled” or “most allies recruited”.

Mini games are triggered either by landing on specific board tiles or when everyone has taken their turn. They are by far the best part of the game because they are driven by player inputs and unaffected by dice. They’re also legitimately great fun. One favourite saw the group divided into a 1v3 battle of vacuum cleaners, with one player lashed to their own large vaccuum and three players attached to a single smaller one before being turned loose in a dusty room. Another saw us cooking up a storm in a kitchen battle that appeared to borrow very liberally from Overcooked. There are hundreds of these minigames and you’ll get new ones every time you play. The player with the highest number of coins and stars to their name at the end of the game wins. 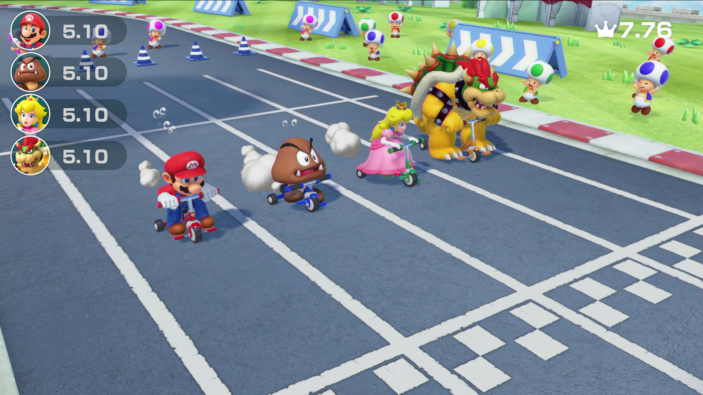 Each game in Mario Party mode can comprise of 10, 15 or 20 turns depending on how big of a game you’re looking for. The number of turns seems sensible on the page but in practice, I found them a bit odd. The 10 turn game feels slightly too short, not quite enough for major board disruption. Whoever manages to get to the first star tends to be the winner. Curiously, 15 turns felt too long. Those extra five turns not only created the room for chaos but saw stars and coins regularly changing hands. The 20 turn game is exhausting, with players jockeying endlessly for the top spot on the leaderboard. I actually found the turn limits a bit much for a party game, long enough that attention began to ebb long before we reached the end of even a 10-turn game. More often than not the people I was playing with wanted more of the mini games over the board movement that is Super Mario Party‘s main thrust.

There are a few ways to shake this up — there’s the River Survival version of Mario Party mode that eschews the board for a wild ride down a fast-flowing river in a four-person kayak. Players must guide the raft safely down the river while still collecting coins and stars for victory at the end. This mode isn’t beholden to the RNG the way the regular Mario Party mode is and it quickly became the go-to option.

One of the game’s newest and most-touted modes is Toad’s Rec Room, which allows for two Nintendo Switch tablets to be placed together in different shapes and configurations for games with up to eight players. It’s a piece of interesting gameplay design, and it’s a very cool way to use the Switch hardware. If you have plenty of gaming friends, I’m sure finding someone with a Switch of their own to pair it up with won’t be a problem. 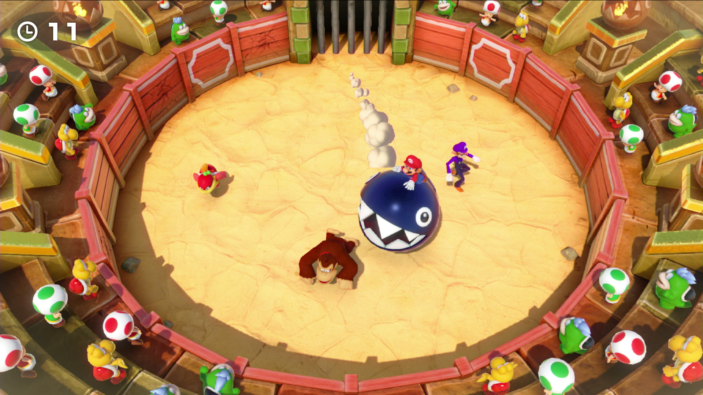 Ultimately, Super Mario Party feels like more of an exercise in frustration than anything else. It’s made with the same tender love and care as any Nintendo title, but its reliance on RNG keeps it from ever being truly fun. If you have a kilometre-wide competitive streak and take a certain savage pleasure in making your friends miserable, this is the game for you. For everyone else, it will be an interesting experiment but one, I suspect, will be quickly shelved in favour of something less infuriating.

Review conducted using a retail code provided by the publisher.