Whatever the reason we had to wait so long to get this in Australia, I for one am just glad that it’s here and that it exists.

Adelaide-based indie developers Team Cherry truly blessed the gaming community when they released Hollow Knight a few years ago, followed by a widely acclaimed roll-out on all current-gen consoles and now finally this, a physical release with all downloadable content available. It’s beautiful, it really is. And even if it’s relatively flat news for those who have already played Hollow Knight, it’s just great to know that this exceptional Metroidvania (undoubtedly the best since Metroid and Castlevania were portmanteau’d into a genre) is now accessible to a wider range of people.

At $59 for the Switch release, and $49 for the PS4 (based on JB-Hi Fi retail prices), it’s still an incredibly under-priced game. Most AAA titles can’t boast this kind of depth, nor can they claim an almost universal show of love from around the world – a wave of acclaim that has been sweeping both the indie and mainstream gaming scenes since the title was first released in 2017. 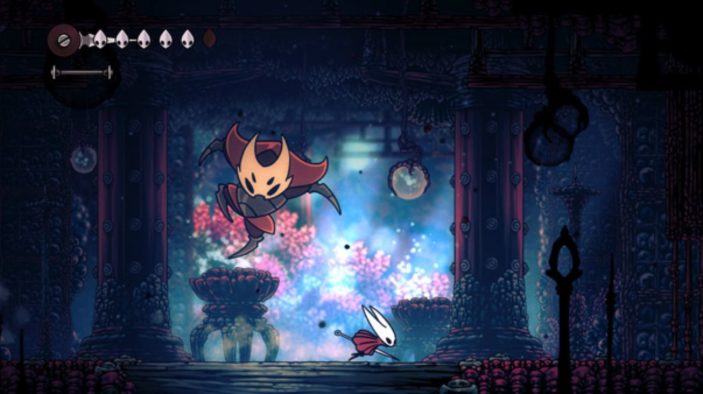 So why does everyone love it? If you’re new to the title, then just know that Hollow Knight’s deceptively simple 2D charm runs deep, slowly and surely expanding out into a challenging, intelligent, impossibly beautiful gaming experience that is both richly reward and absolutely immersive.

The adventure-platformer takes place in the Kingdom of Hallownest, mostly underground and labyrinth-like with countless hidden secrets and unique enemies. You jump right into the gameplay, and you are given absolutely no guidance (the most being the ability to purchase a map and compass that work similar to Zelda games) as you’re left to explore this world and uncover the increasingly urgent plot.

That would be quite frustrating had the talented Team Cherry not filled Hollow Knight with a gorgeous, palpable art style and elegant mechanics, that are simple yet clever in how they keep encouraging exploration.

Visually, the game is one of the most spectacular indies ever made. I’m aware of the weight of that statement, given there are some exceptional indies rolling out almost monthly now, but very few have thus kind of complicated detail and depth, which is both conceptually connected to the gameplay, and endlessly fascinating. It’s all in service to the game’s sullen atmosphere, dwarfing all the uneasy characters and making these characters seem like their really overwhelmed by this elaborate universe. 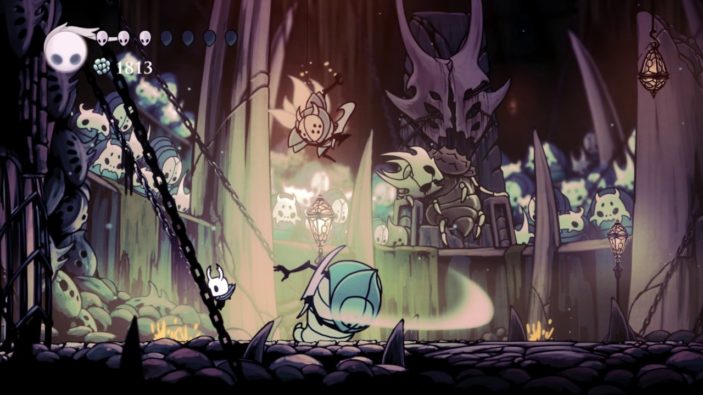 The game follows the Dark Souls route of punishing, rewarding play that isn’t at all interested in how you feel when you slam down the controller for the 100th time. You’re forced to master the simple jumps, dodges and slashes as well as seek out power-ups to give your little bug-warrior new skills. And each and every time your practice pays off against one of the hundreds of challenging minibosses, you’d be forgiven if a single tear of happiness ran down your cheek.

The rhythm of battle is smartly enhanced by the simple visual style, adding a visceral wack every time you swipe at an enemy, while also slightly pushing it back and forcing you to recalibrate your strategy. This is a way to avoid the hack-and-slash temptation, and greatly adds to the value of jumping and dodging.

This microscopic kingdom of sad, aggressive insects is relatively uninteresting at first. Players will marvel at the gorgeous visuals and the complementary soundtrack, but not much else. And that’s the genius of it really. Team Cherry are only interested in nabbing patient players, which is why the first hour or so of Hollow Knight is the game at its dullest. It makes it all the more special when your adventure finally unfolds into one of gaming’s greatest experiences over the past few years.

There’ll be plenty to keep one occupied on this journey. From the rich and complex bestiary packed with over 150 enemies, to the strategic dynamic of “Soul”, the game’s magic currency which can also be used to heal up, forcing you to constantly choose between casting a spell or focusing on vitality. Luckily the “Soul” meter is easy to replenish – just hit an enemy.

Hollow Knight is one of those games that will always exceed any description. Playing it and watching this unfold for yourself is an experience you simply you must have, if you haven’t already. And it’s as simple as that. What Team Cherry have done is given us the Metroidvania to beat, surpassing what a small team should be capable of by imbuing a seemingly simple platformer with raw emotion, intelligence and something many modern adventure games lack: adventure.