While I don’t necessarily understand Codemasters decision to reboot GRID, their pedigree as a developer of skifully designed, fun as hell racing games means I’m willing to take their word for it. From the stellar Formula 1 series to the gritty tracks of Dirt Rally, I had to bite down on the creeping notion that GRID might prove to be the first crack in the otherwise sturdy foundation for modern racing games.

I am so glad to have had that errant notion proven wrong. GRID brings back the series’ polished racing with an accessible twist on its formula. It’s a title with enough depth to intrigue the racing fans like myself, all while packing enough simplicity to attract even the most casual fans.

GRID should be praised for this balance, providing a sense of depth, variety and accessibility in a genre known for its depth and variety. I honestly haven’t felt a balance this even since Forza Horizon 4, and that’s really saying something. Most of what GRID gets right is in its on-track gameplay. While I praise GRID for its pick-up-and-play nature, I must also admit that the racing experience as a whole leans more towards the arcade racer than it does the full blown simulator.

I believe that’s a good thing, because the direction is not what should be questioned, but rather the execution. To put it simply, vehicles in GRID are just really fun to drive. Default settings will factor multiple assists including more response braking, while allowing cars to turn harder at faster speeds without any oversteer. While these settings can be adjusted, or even turned off, I appreciated the way GRID instilled a sense of confidence in me that encouraged me to simply enjoy the sense of speed rather than worrying about the inner workings of the car. This more than anything made it a nice change of pace compared to Codemasters usual fare. You’ll even find a handy rewind feature, created by the GRID series and now co-opted by just about every other racer on the market, to help bring you back on track. GRID doesn’t necessarily punish you for taking an aggressive approach to racing, but instead rewards it with forgiving gameplay. 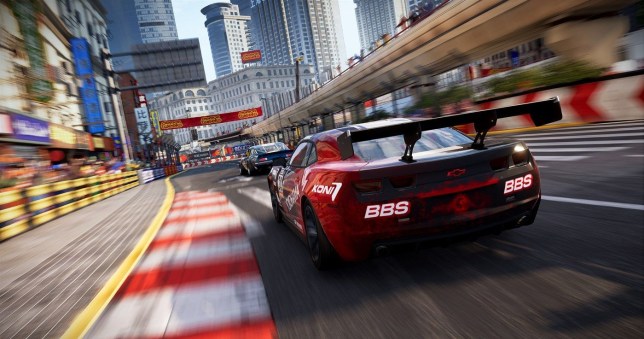 To add to the feeling of accessibility, GRID offers up a bunch of cars from different classes to test out across 12 different courses, featuring locations like San Francisco and Okutama, seen in the original Racedriver GRID, while newcomers such as Havana really brightened the overall colour palette. Vehicle classes include sporty hatches, to muscle cars, all the way to JDM and even classic cars such as the Mini Cooper. All are fun to drive, and while they do add a sense of variety in the way they handle, I never found them to be so disconnected that I felt either intimidated or frustrated. It is worth noting though that the major differences are separated by both speed and weight, 2 factors that all vehicles in GRID are judged by. Cars that are both faster and lighter will tend to handle like feathers, at the cost of riskier turns, while others such as muscle cars, prove to be the heaviest. I found that these muscle cars were probably the least exciting, as their speed was somewhat diminished by their understeering. But then again, this is more of a personal nitpick, as GRID actually thinks to include these hints of realism to help keep things grounded. On the topic of grounded however, cars look equally realistic. Each model is accurately recreated, with some impressive lighting effects only adding to overall quality of the experience. The same can also be said about the tracks. While GRID offers up what feels like less than its original counterpart, the weather effects more than made up for this as all tracks can be raced on at different times of the day, and in various weather conditions. While I can imagine most of the weather effects seen in both F1 and Dirt Rally would have aided in the production of GRID, it definitely shows, as the rain in particular once again brings out those slick lighting effects while blurring your vision just enough for it to feel dangerous.

GRID rounds out the experience with an engaging career mode which showcases each vehicle class, consisting of Touring, Stock, Tuner, GT, FA Racing, and Invitational, laced in what feels like a metric tonne of races. Each vehicle class has its own list of miniature cups, consisting of 2 to 3 races, as you progress further through the list, culminating in a showdown, or a boss battle race of sorts. Completing enough of these showdowns (and completing each vehicle class as a result) leads you into the GRID World Series; a culmination of everything you’ve come across up until this point. It’s admittedly simple compared to Codemasters past efforts in other racing titles, but can be appreciated for its straightforward approach, keeping in line with its accessible nature. The only real issue I had with this career mode is that as it’s the juiciest part of the experience, little stands in the service of shaking things up, so I would recommend that if you wish to play GRID consistently, avoid the Free Play mode (which allows you to set up single races) altogether, and just jump into the career mode, picking any class you feel like using and progressing in that area. GRID does try its best to include a nemesis system of sorts, as certain racers can become bothered by your aggressive racing techniques and begin to fight back, but I felt as though this was pretty redundant as the AI rarely did anything they weren’t doing before they were my rival. It’s not to say GRID’s AI is bad; it’s actually pretty good, but the nemesis system fails to squeeze anymore juice from the fruit. The campaign also allows you to recruit one teammate at at time during races, and they can be used to ward off your nemesis on command, sometimes to hilarious effect as they make it their sole purpose to ram your opponent off the road. Multiplayer exists, but at the end of the day, it’s standard competitive multiplayer fare. 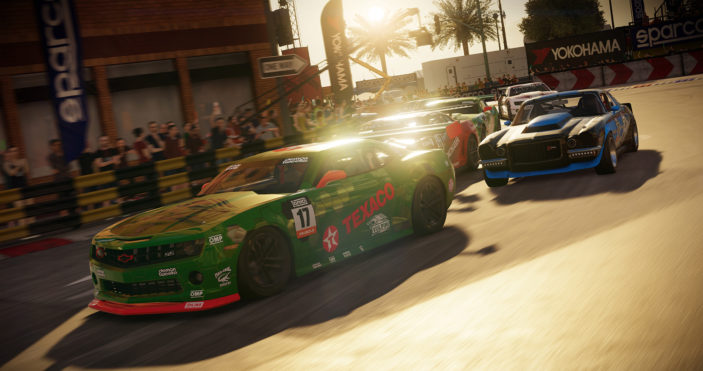 As there are plenty of races to compete in, I was disappointed that there weren’t as many cars to interact with. A total of 69 cars can be driven throughout all vehicle classes, but it’s not up to par with something like Forza Horizon 4, which offers up a staggering 450 vehicles. While each vehicle is fun to drive and lovingly crafted, I felt customisation wears a little too thin too soon, with a livery that feels quite dated by todays standards. It feels as though GRID is happy with the way its cars look and doesn’t want you to mess with that. While future free DLC aims to add tracks and vehicles along the way, I can only hope they include some more customisable options.

Overall, GRID succeeds at being a fun, accessible and engaging racer. It might not be as deep as Codemasters previous titles, but its focus is clear. It’s something I can respect, and while customisation options wear a little thin, the simplicity of the campaign mode allows those causal fans to partake in races without any of the fat in between. I can understand how it might seem as though I’m being overly defensive, but all I can say to that is: GRID knows what it is, and wants to allow every racing fan to be able to jump on board with that.

Review conducted on Xbox One with a physical retail copy provided by the publisher.