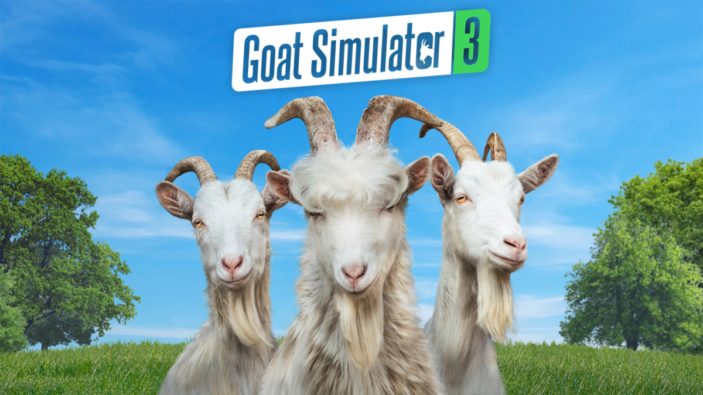 I’ll admit right upfront, that I’ve never played the original Goat Simulator before Goat Simulator 3. But after playing the newest entry in the franchise, I’m not sure why or how I’d ever missed it. That being said, if you tried looking for Goat Simulator 2, don’t bother; it doesn’t actually exist, making Goat Simulator 3’s title hilarious in its own right. It is without a doubt a hilariously self-aware and fun addition to the franchise, dumping in loads of tongue-in-cheek video game references, all while providing virtually limitless opportunities to cause havoc within its dense and more expansive open world.

Goat Simulator 3 wastes no time in referencing video game pop culture, through an introduction that many may recognise; “You’re finally awake”. The Skyrim-esque introduction only lasts a couple minutes as you awaken in the back of a tractor, filled with goats. As the farmer explains what you’re in for, you arrive at your destination and are immediately given the chance to cause mayhem and mischief, should you wish to do so. While Goat Simulator 3 never forces you in one particular direction, there are certain quests that your can take on board, once again aimed squarely at your questionable intentions. From setting off nuclear bombs, to forcing people into election booths to force them to vote for you as President, to breaking into a highly secret factory to steal and unleash a biological weapon on a nearby community, it’s nothing short of hilarious. While I would criticise any other game of misleading gamers into a pit of wasted hours, Goat Simulator 3 instead leans into its insanity, making each mission feel short enough to engage with and complete, before the novelty ever wears off. 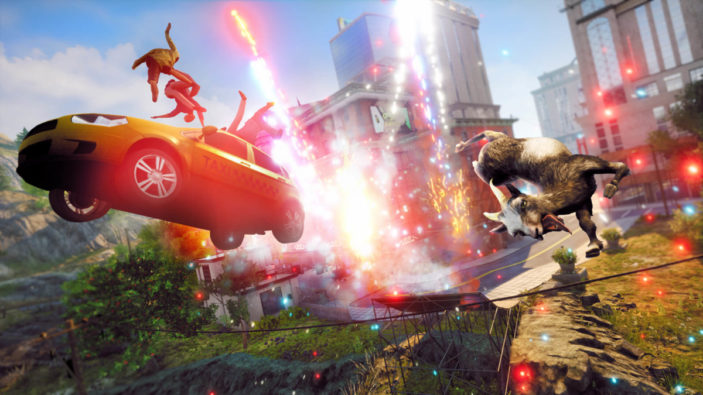 Along the way however, you will be given objectives steered towards progression, whether it be competing certain goals like learning the controls or customising your very own goat, to level up your Illuminati Ranks. You’ll gain Illuminati points by completing various quests to unlock enough points to upgrade your Goat Castle, and ultimately reach the game’s ridiculously over-the-top conclusion. You’ll also be able to complete a list of objectives called Instincts, which rely on you completing random tasks within the open world as opposed to completing dedicated quests. My only gripe with the structure here is that it can lose focus at times. Like a kid in a toy shop, I was frequently getting distracted, racking up a number of quests based on my knack for exploration.

Grabbing Life by the (Goat) Horns

In terms of gameplay, Goat Simulator 3 is as versatile as it is wacky. While none of these mechanics feel particularly fleshed out, you can headbutt almost anything around you, or lick items to latch onto them and hurl them about the open world. The remining mechanics rely more so on contextual situations, meaning you can really do almost anything. Want to grind on powerlines? Go for it. Drive a car? You got it. The mechanics themselves can feel basic at times, but the sheer amount of variety on offer here is admittedly astounding. My first few hours with Goat Simulator 3 were simply spent roaming about the farm and throwing things about. To top it off, your efforts will also unlock Goat Points to buy various cosmetics. Fit yourself with some butterfly wings to fly about the open world, or simply turn yourself into a skateboarding shark by grabbing the Tony Shark skin. The fact that these too affect the gameplay to a deeper degree is also a nice touch.

But it’s not just Goat Simulator 3’s missions and ridiculous customisation that sets it apart, but its dedication to video game pop culture references that keep it feeling consistently fresh and engaging. With the open world now larger and more diverse than ever before, the ability to stumble across another easter egg or pop culture rip-off is downright exciting. Early on, I came across an old lady, sitting peacefully in her front yard. As I approached her, she started shooting blue balls at me from a rocket launcher she had seemingly pulled out of thin air. Hurling abuse at me, I retaliated by advancing as best I could, and finally headbutting her off her rocker. With that, a nearby cellar door opened, beckoning me inside. Once I entered, I was treated to a lovingly created replica of Wolfenstein, pixelated graphics and all, where I navigated familiar halls to stop an army of bazooka-wielding seniors in rocking chairs. These moments consistently amuse and rarely cease, right through to your final quest. Each new area is littered with new things to find, each inspired by popular video game culture, which I would rather not spoil for those interested.

Goat Simulator 3 is fun solo, but best enjoyed with up to four friends online. There are a few dedicated mini games like The Floor is Lava, but it’s imply fun to see that initial sense of freedom and immediately multiplied. Local split-screen co-op is also available, meaning you can gather your friends around the couch for a more intimate take on destruction and mayhem.

Goat Simulator 3 is many things, and sometimes too many. The sheer variety of missions, gameplay mechanics and pop culture references on display are fast and frequent, providing laughs even beyond the 10 or so hour story; if you can even call it that. But it’s in the insanity that I found the most enjoyment. Missions rarely overstay their welcome, while smaller objectives like the random Instincts encourage both explorations and experimentation. The larger open world simply amplifies the consistency of hilarious moments, the results of which tend to feel amplified and more effective when shared with friends. Goat Simulator 3 might not be for everyone, but damn it, it’s going to try.