Ghostwire: Tokyo Review: Saving the city, one soul at a time 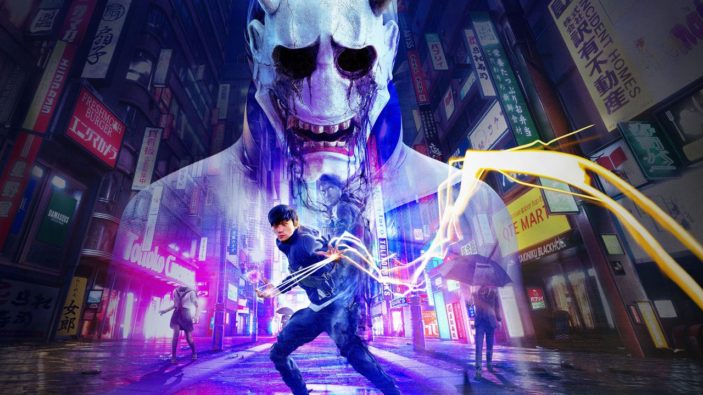 Tokyo might just be one of the busiest and most popular cities in the world. Known for its dense population, vibrant nightlife and iconic culture, you’d be hard-pressed to find a place with less to do or see. Enter Ghostwire: Tokyo. A supernatural force has left the city empty, devoid of human life. Their souls hang in the balance, and the journey ahead is long. Ghostwire: Tokyo does a lot right on its way through the ins and out of the Shibuya region. The detailed nature of each street and well-paced story provide enough visual variety, even if the clunky combat and basic side missions lack the depth needed for longer play sessions.

Ghostwire: Tokyo puts players in the shoes of Akito, a young man awakening after the citizens of Tokyo’s Shibuya region have mysteriously vanished. Enveloped by a spirit named KK, the duo must venture out into the literal ghost town, with Akito looking to discover exactly what had become of his ill sister in a nearby hospital. On the other hand, KK is along for the ride, intrigued by the forces that set Akito on his journey. The story itself is well-paced and focused, as the duo struggle to get along, fighting to prioritise their missions and goals over one another. Their ambitions become more understandable as the narrative progresses, but I found it hard to side with either character over anything really relatable or heartfelt. Akito’s story hits in certain places emotionally, but these moments are too few and far between, leaving much of the story’s replayability torn between memorable main missions and boss battles, and the rather bland traversal and underwhelming sense of progression that binds those moments together. 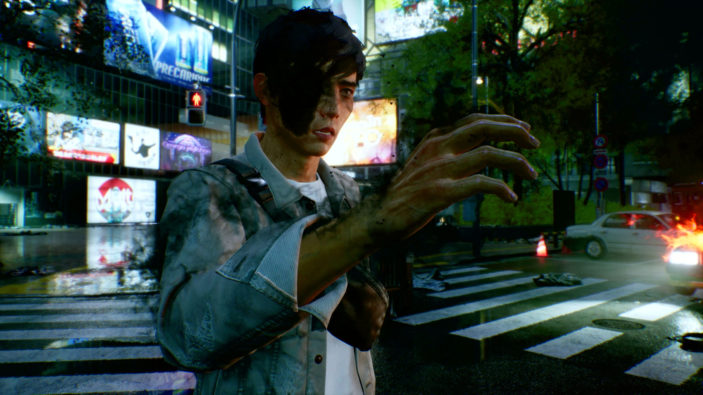 The main missions themselves are decent enough. When Ghostwire: Tokyo is tasking you with tracking a target of interest, or pitting you against a boss, stakes are high and the pace is consistent. However, repetition sets in rather early, thanks to some bland side missions which see Akito completing various favours for leftover spirits which have unfinished business within the city. The main story takes itself so seriously, and these side missions could not stray further in the opposite direction. A particular side mission sees you tracking down some toilet paper for an entity not yet finished with their own ‘unfinished business’ if you catch my drift. While they can be funny and occasionally charming, I can’t help but feel they all boil down to basic Fetch quests and combat arenas. Thankfully, each of these missions rarely last more than 20-30 minutes.

While traversing Shibuya, Akito will have to clear out an obtrusive fog, which blocks your path forward. To rid the city of fog, you’ll have to cleanse various Hori Gates throughout the city, small shrines that usually lead to small arena-style battles, which drive not only the narrative forward, but your ability to explore newer parts of the city. The Hori Gates themselves do a great job at guiding you to each and every corner of the map, be it simply to progress or explore on your own terms. Having such an objective tied to general progression and exploration is a great idea, as it rolls so many of its existing mechanics, such as traversal and combat, into bite-sized encounters.

Traversal itself can prove a little simplistic, with the only real ways to get around the city, besides on foot, presenting themselves in the form of grappling to flying creatures known as Tengu Spirits to reach rooftops and the ability to glide on the way down to ground level. While these two options are functional, the lack of any slick parkour mechanics leaves these options feeling disjointed, ruining any sense of momentum as you navigate your surroundings. 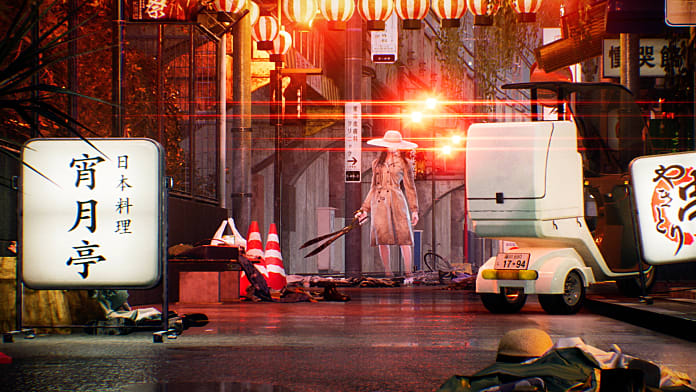 Combat is consistent and mechanically sound if a little basic. Akito is equipped with various elemental powers with wind, fire and water powers known as Ethereal Weaving, and a bow that dispatches enemies with great haste from a distance. However, given combat essentially boils down to mashing the R2 button, it can feel a little basic and repetitive. It’s also worth noting that for the general pace of combat, the default camera sensitivity settings are way too sluggish, causing you to feel anything but powerful and efficient. I basically had to crank the camera sensitivity to the maximum settings to feel like I had a chance. Enemies tend to sneak up on you from all angles and the ability to react and deal with such encounters feels frustratingly underwhelming as a result. Without the ability to dodge, Akito feels rather stiff, with his block a shallow attempt at providing a level of defence that goes relatively unused, particularly against front-facing enemies, which can be dispatched long before their attacks reach you. Your bow also provides an added layer of range to combat, in which enemies can be handled quietly and from a distance. Unfortunately, by the end of the experience, it all melds into a blur of visually impressive blasts of energy, as an attempt at a particular playstyle will largely be limited by relatively clunky combat. 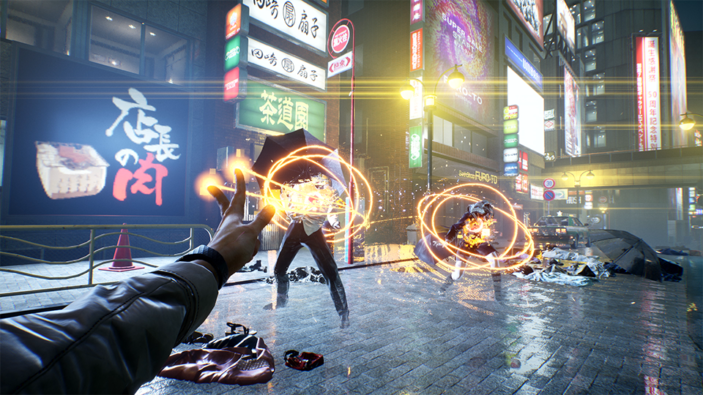 Spectral Vision also allows Akito to highlight his surroundings, similar to Lara Croft’s Survival Instincts seen in the rebooted Tomb Raider franchise. This ability highlights nearby enemies, and collectibles of interest, ensuring that your time spent scoring the city streets are never wasted. Akito will also be able to save and collect trapped souls throughout each area, stopping at various phone booths throughout the city to deposit them, in order to upgrade your skills. And with 240,050 in total to collect, you’ll be busy for a while. Upgrades can be utilised to enhance both your Ethereal Weaving skills and bow. Players can also equip new items of clothing to enhance the existing attributes of each of the Etheral Weaving attacks, should you wish to enhance the effectiveness of your attacks.

A Tour of the City

The region of Shibuya is incredibly impressive, both visually and from a gameplay standpoint. For a city that’s devoid of human life, you’ll encounter incredibly vibrant streets, illuminated by neon signs above, with ray-traced rain and puddles reflecting each and every inch of surrounding light. The views from atop buildings highlight impressive draw distances, the likes of which I’ve rarely noticed to this degree in an open-world game. However, it’s the equal amount of density and attention to detail that truly stand out. Shopfronts, apartment windows and big, bright neon signs add a level of authenticity to your surroundings, taking a city that is otherwise empty and making it feel lived in. Yokai, otherwise known as supernatural wild creatures also roam the city streets, as Akito can interact with them and read their thoughts, with some even requesting your assistance in the form of additional side missions, in which you’ll usually track down their missing Yokai friends and companions.

The options to explore your surroundings in either fidelity or performance modes further add a layer of detail or fluidity, should you wish to prioritise resolution or frame rate. Thankfully, it all runs well. But I can’t help but feel Ghostwire: Tokyo is at its best when it’s simply guiding you throughout the city as a virtual tourist, allowing you to take in the sights of each location at your own pace. The game also exhibits a consistently creepy vibe, that relies less on jump scares and more so on a lingering ambience of dread and foreboding. 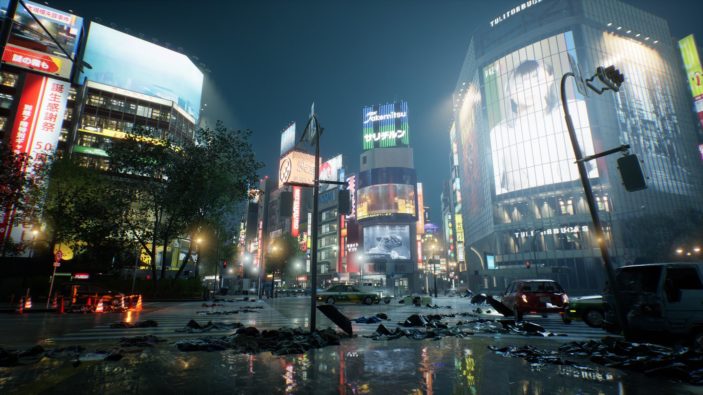 Overall, Ghostwire: Tokyo is an admirable, functional and downright creepy experience that sticks the landing, for the most part. Its gorgeous, expansive and detailed interpretation of Shibuya makes up for many of the shortcomings that come with basic combat and clunky traversal mechanics, along with repetitive side missions. Akito’s motivations throughout the story and interactions with KK yield some memorable moments and genuine chemistry, wrapped up in an intriguing premise, with various upgrades encouraging and allowing a sense of solid character progression. Ghostwire: Tokyo is simply at its best when allowing you to roam the streets of Tokyo, cautious of all the dangers that may follow, thanks to a consistently scary ambience that never lets up.