It will help if you read this introductory par in the voice of a 1930’s movie serial announcer.

Greetings fellow adventurers, and welcome to Strange Brigade, the new cooperative shooter from developer Rebellion. Right out the gate, Strange Brigade prides itself on blending Indiana Jones with Brendan Fraser’s The Mummy franchise in order to create something authentic yet bizarrely derivative. Through all this, does the game provide blistering action while balancing a fun cooperative experience? Find out as I review … the Strange Brigade!

First things first: Strange Brigade’s main draw is in its aesthetic. It’s not hard to detect its goofy 1930’s serial vibes which carry most of the game’s charm and therefore shape the majority of the experience. The narrative is intentionally simple — an evil witch named Seteki is disturbed from her resting place and resurrected. Much the way I do when woken up early, Seteki instantly wreaks havoc on the world of the living. It falls to the Strange Brigade to stop her.

From the hilarious and over-the-top narrator who may love the words “Strange Brigade” a little too much, to the various film-grainy cutscenes that begin each mission, it’s hard not to smile at the love and effort Rebellion Developments have put into their stylistic approach. While it’s definitely campy, the game makes no apologies for it, wearing its earnest love for the style on its sleeve. Because the game is already well aware of how dopey it is, it’s really hard to poke fun at it. The game rolls with its silly flavour and, thus, so does the player.

Gameplay wise, Strange Brigade presents itself as a 4-player cooperative shooter complete with four unique characters to choose from. Frank Fairburne is the stereotypical hard-nosed macho man. Archimdes de Quincey is the reserved and suave Scholar. Gracie Braithwaite is the calm yet rigid explorer and Nalangu Rushida is the most supernatural of the bunch, having been a demon hunter in her past. It sounds stereotypical and even laughable, but Strange Brigade’s lead characters are at least all unique in the own way. Each character sports their own weapon classes and unique abilities encouraging you to mix up your play style.

Frank uses a blast that send an enemy flying back only to explode soon after, Gracie uses a grappling hook to draw enemies in, Archimedes uses a projectile that stuns multiple enemies while Nalangu uses a similar attack that functions within a confined radius. It aslo helps that weapons are also interchangeable between characters meaning you can have your cake and eat it too. While each character also comes complete with their own quips and personality quirks, I found that these aspects were under-utilised, particularly when playing solo, as the fun of hearing these characters interact with each mother is absent as you are all alone. It’s a shame this is that case, as the single player experience could have benefited from some AI companions to tag alongside player controlled characters. After all, this is the Strange Brigade, not the Lonesome Stranger. 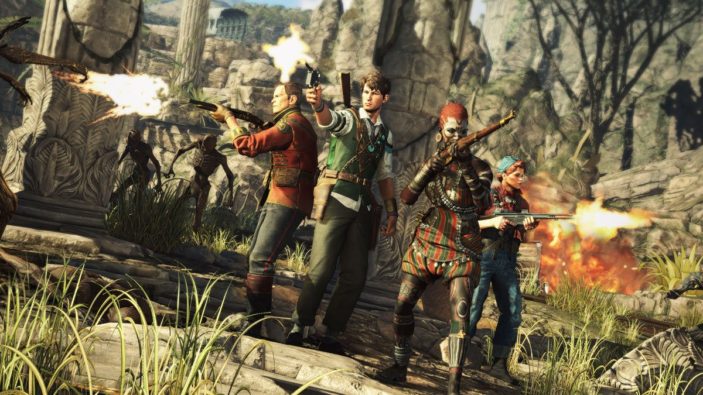 After my first hour with Strange Brigade, I found myself comfortable with the controls and enjoying the gameplay, thanks to some tight shooting mechanics and responsive controls. The game also runs smoothly enough for 30 fps, and I rarely came across any serious glitches or frame rate drops throughout my time with it. The game offers up some neat variety too, thanks to some inventive enemies (all introduced in true campy fashion) to some special weapons, on top of the 14 standard weapons in the game. Unfortunately the variety stops there, as all the enemies seems to move the same, either incredibly slow or intentionally fast, and not providing too much of a challenge in the process. I only died twice during my entire play through. You heard that right, twice. It’s a shame because the game’s first mission introduces hordes of enemies to shoot broken up by a few interesting puzzles complete with some colourful and interesting environments, but as you shoot both enemies and objects in the environment to solve puzzles, you’ll find that most of the variety ends a the barrel of the gun.

The environments are colourful and somewhat varied, but from the first two missions alone, the environments were so similar I was unaware I had even finished one mission and started the next as I thought I was in the same location. It’s just a shame because Strange Brigade is really trying, but just can’t shake its repetitive structure. Thankfully, co-op is mostly a fun experience, as characters look, sound and most importantly play different, and is most definitely want to play this game in order to have the best time with it. While I will never understand the lack of local multiplayer these days, online servers worked well enough as I had no issues with the experience connectivity wise. I must admit, coop is damn good fun. Maybe it’s the way the characters interact with each other or maybe it’s the way everyone bands together to take out the boss at the end of each mission, something just clicks when Strange Brigade is played with others that made me feel I was playing this game the way it was meant to be played, with the diversity of each character proving to be the final stitch that pulled everything together. 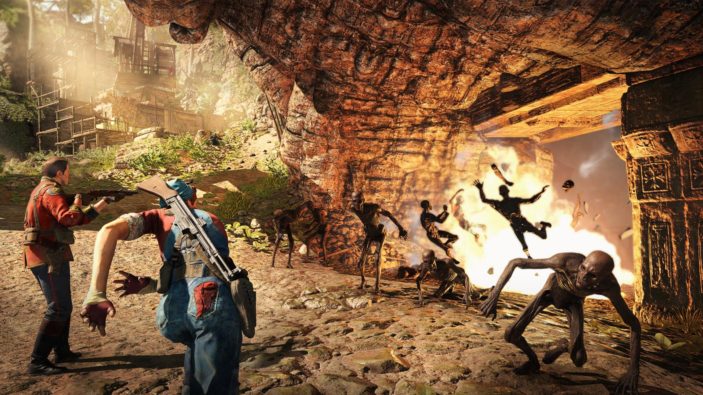 Whether tackling the campaign mode, various challenges of the ever present horde mode, I found myself coming back for each mode cooperatively for some light hearted fun. Unfortunately, there’s not really much more to say about Strange Brigade that breaks new ground, or even excels in a particular field. While it’s a jack of all trades, it’s a master of none, but that’s ok. Thanks to it’s 1930’s serial aesthetic, fun and varied characters and tight gameplay mechanics, I can forgive its shortcomings as everything presented here feels authentic but knows it’s having fun with it at the same time. Playing cooperatively is the way to go, and the gang may be in need of some new explorers. Will you join the Strange Brigade?