Pro Evolution Soccer has always been appreciated by fans for its uncompromising, detailed and rewarding structure and gameplay; and with PES 2019 the series continues this tradition. Thanks to some fantastic overall gameplay, admirable presentation and slight adjustments to modes PES 2019 may scratch that football itch as a valid alternative to the wildly popular FIFA series. It’s easy to see why one is more popular than the other, with the long standing licensing issues the PES series has endured, but to those football fans that are open to alternatives, you can find myriad options and experiences here.

The PES series has always been a quiet achiever against EA’s rock-and-roll FIFA, and fans will be glad to know that PES 2019 maintains its strong focus on realism. Being a FIFA fan myself, I honestly found it quite difficult to adjust at first, as the gameplay was tougher and more realistic, but oh-so-rewarding in the end. Players feel weighty, and handle the ball in such a way that feels grounded and responsive; the way a normal person would react. Fast players still take time to turn, and great defenders really snuff out those sneaky attackers like Messi, as their physical efforts can be felt both on screen and in the palm of your hand.

The newest addition, however, is Magic Moments, an RPG-like addition that adds certain statistical buffs and abilities to certain players on a team. These aren’t necessarily number-based or derived from a player’s overall rating, but more as a sort of X-factor, a certain quality that players bring as an additional layer to the overall team. Certain strikers may be prone to bullet-like shots; while captains may give an added stamina boost to those around them, or certain substitution players have a higher chance of scoring when subbed on in the second half. It’s interesting to see this change and direct portions of the game as you find yourself invested more in certain players knowing that they have a stake in the game at hand. You are no longer looking at the team as who is faster, slower, stronger or weaker, but more who has that magical quality to take a game onto their own shoulders, in which you’ll find some real life counterparts share that same quality. But if you’re still into your traditional stats, you can find them in all their complex and detailed glory too. 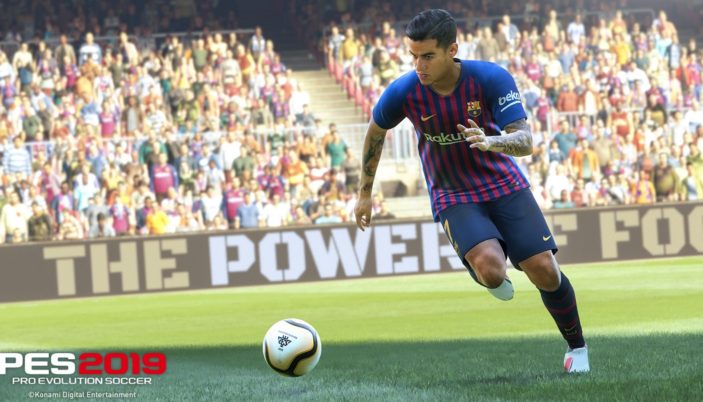 PES 2019’s main game modes are back and interesting enough to both fans and newcomers alike, but really provide enough of a change to keep you around long term. Apart from your normal kick-off exhibition modes, players can take part in both online and offline seasons, create a player and take them through the ranks, or partake in myclub, the PES alternative to FIFA’s My Team mode. While this mode functions very much the same as the aforementioned FIFA counterpart, I was glad to see it wasn’t as money hungry and slightly more diverse, offering weekly challenges and constantly updated rankings within the PES League, so you can keep tabs on all the beatdowns you offer your opponents. While these modes naturally break the bank thanks to the endless hole micro transactions seem to throw you in, so not fear, myclub points can be earned by simply completing tasks in the myclub Records menu, although this naturally takes more of your time compared to the good old “can I borrow 20 bucks” method. All in all, the mode is functional and rewarding as it’s ever been, but not different enough to reinvent the wheel. Sadly, this goes for both the regular league modes and career modes.

I honestly understand why PES doesn’t get as much love as FIFA, and now with licensing further favouring the FIFA franchise, expect to see less of the teams you love in PES 2019 in all their official glory. While the big teams like Barcelona or Arsenal are out and about, the loss of the Champions League license simply means less recognisable teams and stadiums. I’m a Chelsea fan, but as far as PES 2019 is concerned, I’m a “London FC” fan. And that just makes me sad. But it’s not all downhill from here, as PES offers some unique and impressive presentation and authenticity in other ways, as players celebrate to the camera, goal keepers function in such a way that you really feel their dive, motion and saves much more than in previous iterations, and there are still some official award around, like the International Champions Cup. Yes, we get it, nobody really cares, but something is better than nothing. These are strange things to point out, but it’s the little things the PES franchise is still doing and continuing to improve that sets it apart and in some ways above its FIFA counterpart.

Overall, PES 2019 is a fun, deep and surprisingly authentic football sim, thanks to its emphasis on player habits, behaviour and overall star power, which doesn’t always come across in a stat or number. It brings out the player over the game, and if you look at it closely enough, you might notice that it’s these players that make the game what it is today. While the majority of modes are back, they’re still as functional as ever, if only slightly improved. Licensing has always been an issue, as it’s sad to see more licenses leaving the table, but PES 2019 holds its head high and provides and admirable football experience through and through. If you love football, and can look past these flaws, you might just find an experience worth sticking around for.