Games Review: NBA 2K Playgrounds 2 (PS4, 2018) brings back all the fun, but all the micro-transactions too

The NBA Playgrounds series is back once again for its second attempt at a slam dunk, with a fun, charming and old school approach rarely seen since the good old days of NBA Jam. I’m happy to say that NBA 2K Playgrounds 2 is an improvement over its predecessor in almost every single way, with added players, courts and modes, all while keeping the charm that made the first title in the series so unique. Card collecting is back, and while every player can be unlocked through in-game means, micro-transactions soon rear their ugly head putting a dint in an otherwise perfectly enjoyable basketball experience.

The first thing you may notice about NBA 2K Playgrounds 2 is its cartoon-inspired aesthetic. Playing as caricature versions of your favourite NBA players is either charming or hilarious depending who you are, but thankfully both in a good way. Whether it be Kevin Garnett’s abnormally long head to Larry Bird’s signature moustache or Magic Johnson’s gigantic smile, there was always something in each player that made me smile, particularly for an NBA fan like myself. And with over 200 players creating the roster, (even the legendary Michael Jordan thanks to the NBA 2K branding) that smile wasn’t going to leave my face anytime soon. The charm carries through to many other aspects including the courts, which have you playing in cray places such as the beach and even the city. It’s nice to see NBA 2K Playgrounds 2 taking pride in their tongue in cheek approach to entire package.

These improvements extend over to the gameplay side of things too. While NBA 2K Playgrounds 2 prides itself on the casual pick up and play motto, the controls have been refined and mechanics adjusted to at least make sense of the minimalistic controls. The biggest improvement is the addition of a shot meter, allowing you to time the release of your shots, something which the original NBA Playgrounds did not have. Time and time I found myself putting up airballs, but with the shot meter, I found myself taking more educated and calculated shots, aware of the chances my particular player had of making a basket from that range. Otherwise, the overall gameplay remains largely similar to its predecessor, with some added animations in the dunk department. It’s not all bad, as the gameplay functions without any hiccups and feels quite smooth and intuitive. The only grip I have here is that moves such as crossovers are fun to use, but don’t really do much in the way of strategy, as it merely gives you a small speed boost past your defender. Abilities also make a return which keeps things fun and varied. Whether you’re creating an ice barrier around the ring, or shooting fireballs from anywhere on the court, the abilities repeatedly instil that the light-hearted sense of fun in every mode. However, an issue I had with these abilities was that I couldn’t figure out how to activate them. Time and time again I found the game automatically activating these abilities when it felt like it, which took away from some of the strategy, as I would have liked to use these abilities at certain times to mess my opponents up when things got close. 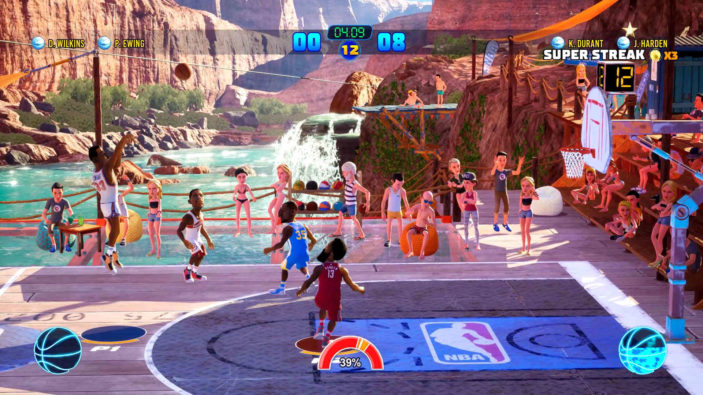 While there are a few returning modes in NBA 2K Playgrounds 2 such as your standard exhibition matches and online competitive modes, I found myself enjoying the season mode the most. This mode allows you to power through a miniature NBA season topped off with Playoffs in order to take it all, including unlocking a neat legendary player for your chosen team. I found myself playing this mode the most because it was where I earned the most in-game currency in order to purchase new card packs and unlock new players and swag. This mode seems like a perfect fit for the franchise given its length, with added motivation to unlock a particular player at the end of it all, which kept me coming back. However, outside of this mode there’s not much that’s new to brag about, apart from the added 3-point shootout mode, which plays very much like a traditional 3-point contest. This mode seems like the biggest missed opportunity as it’s merely a training exercise to help you get your shot timing right, with little to no abilities seen in the other modes present here.

As previously mentioned, you unlock both played and swag by purchasing card packs, which I did’t have a problem with as each pack I opened had me as excited as that Nintendo 64 kid on Christmas day. However, it’s not all perfect. With over 200 players to unlock, things become a grind real fast, as the game doesn’t have the depth and variety needed to keep things fresh until you’ve unlocked at least every player. To combat this, you can buy the entire roster with the game’s premium currency, equivalent to about 10 bucks. While every players can still be unlocked with in-game currency, I found myself cheated as if I wanted to get anything for free, it was going to take me much longer than I’d like to admit, and having purchased a game only to purchase the entire roster in the game at an additional cost left me fuming. But given you have the time, patience and motivation, at least it’s not all doom and gloom. 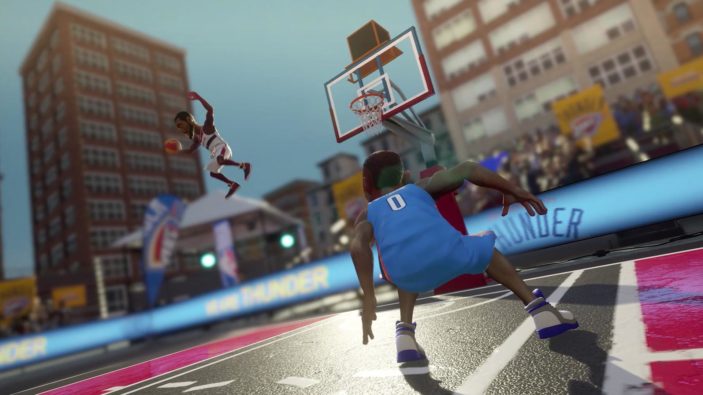 Overall, NBA 2K Playgrounds 2 still manages to improve on its predecessor in almost every single way thanks to added players, courts and modes topped off with consistently charming visuals. The season mode felt like the most varied mode which kept me coming back for more, while modes like the 3-point contest felt like a wasted opportunity. Card collecting is fun given the amount of players on offer and the amount of duplicates earned surprisingly low, the micro-transactions soo rear their ugly head as the grind becomes super frustrating and repetitive. But if you’re looking for some fun arcade style basketball, NBA 2K Playgrounds 2 stands as one of the better options available.