Games Review: Mega Man 11 sticks a little too closely to the classic franchise

Oh Mega Man, such a treasured relic of the past, and one of the great gaming franchises of the 8-bit era. It was — is — one of the few series that could get away with being so repetitive and frustratingly difficult because there’s something about its simple premise and nostalgia-inducing schtick that just stuck so well throughout the years. Even with series lead Keiji Inafune’s departure from Capcom 8 years ago, and lacking titles in Mega Man 9 and 10, hype would never seem to go anywhere for the helmeted blue-shelled boy and his trusty “Mega Buster”.

Sporting a new, more modern and colourful art style, Mega Man 11 is surely a godsend for gamers who have been craving a proper Mega Man title for years. One which calls back completely to the classic games while also pushing the series forward (albeit very slightly) with nifty tricks and a recreation of that aforementioned, frustrating, “excuse me while I scream into a pillow” difficulty that taught us Gameboy-touting kids how to be gluttons for punishment, as long as we eventually get the unrivaled fist-pumping feeling of achievement that is finally beating one of the robot masters and stealing its power. 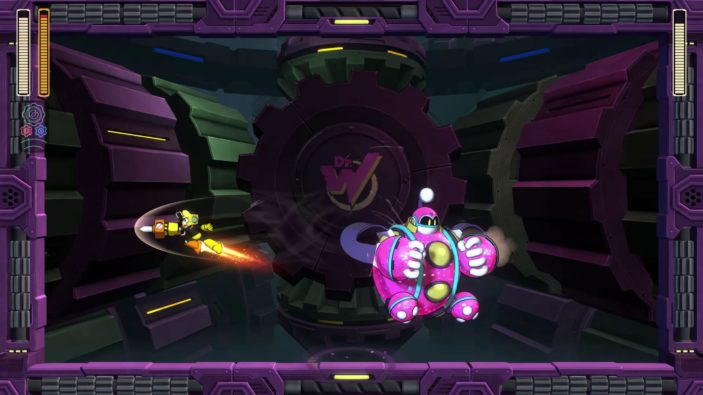 There’s no mistaking Mega Man 11 for anything but a Mega Man game. Aside from the vastly improved 2.5D graphics, this plays like the Mega Man of yesteryear: linear, formulaic, unsurprising, difficult, but so so much fun. If you’ve played a Mega Man before then you know the deal: select your level (robot master), struggle and swear your way to victory, absorb robots power, use new power to help you best subsequent levels and exploit villain weaknesses, rinse and repeat until you reach the castle of that dastardly Dr Wily. Mega Man 11 adds no depth and makes no apologies for it, moving away from the more exploratory approach of something like Mega Man X and trusting that hardcore fans will appreciate the integrity. They will, for the most part.

The biggest change in Mega Man 11 is a substantial gameplay device called the “Double Gear” system. The left and right shoulder buttons become toggles for the mechanism, built into your suit by Dr Light and his small team. One function, Power Gear, lets you overcharge your weapons for a brief boost in firepower, only really useful at the early beginnings of the game before you gather more powers. The other, more useful function is the Speed Gear and getting a proper handle on it, timing it right, and using it to your advantage can change gameplay dramatically; it slows down time so you can dodge bullets, land jumps, slide under bosses, and what not. It proves necessary in such a fast paced environment where you’re often shooting and jumping at the same time with very little leeway for error. 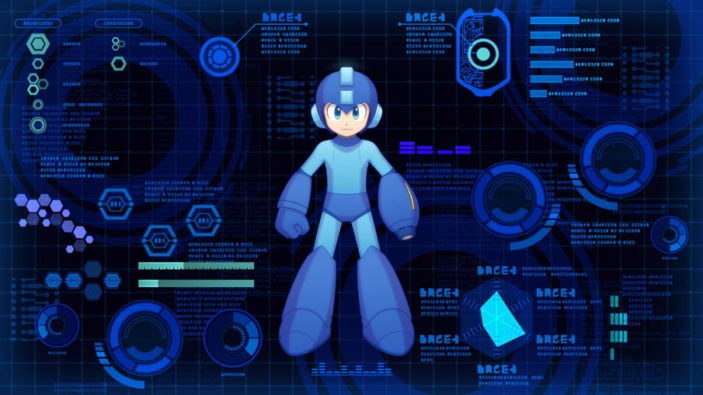 Including something like the Speed Gear has allowed the level designers room to be a bit more ferocious, and even on the standard level of difficulty (there’s four) Mega Man can sometimes seem impossible to beat. Stages are also longer than the classic games, and there are plenty of enemies, spikes, degrading platforms, and mini-bosses to keep players occupied well before they reach the stage’s Robot Master.

Pattern recognition and repetition are still necessities even if you learn how to use the Double Gear to your advantage. There are also handy bolts collected throughout levels, used as currency to purchase items that end up meaning life or death in some situations. The way the game cleverly necessitates the need for rigorous and strict training; despite the soft looking enemies and hyper-animated details that make stages like Torch Man’s summer camp themed playground stick out, there’s an almost sinister core that can reach Dark Souls levels if you’re not careful.

Luckily, Easy Mode (and I must admit, I had to play it on Easy Mode the first time to even be able to write this review) is a significant drop in toughness and allows you to breeze through levels quite quickly. It’s also a good way to figure out the most efficient boss order, which is necessary because certain weapons make things much, much easier against certain robot masters.

And speaking of the Robot Masters. Unfortunately the strict dedication to classic Mega Man titles means that little imagination has gone into these major enemies. Acid Man, Impact Man, Tundra Man, Black Man – most are minor riffs on previous characters, and only some give weapons which you’ll prefer over the standard Mega Buster. Their respective stages, however, are given fun themed treatments with a standout example being Block Man and his crumbling Egyptian fortress, or Blast Man and his explosive stage that has been rigged with explosives and exploding enemies. Many of these boss fights have two iterations as well, which can be relentless if you’re tackling a boss without full health. 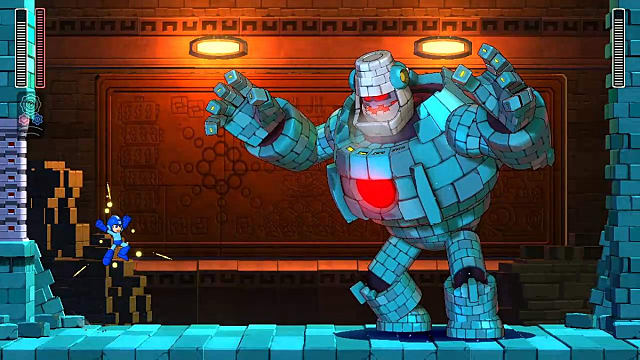 Sadly, much of Mega Man lore is largely missing from the game. While you do have Rush – with his Coil, and later, Jet abilities – to use from the start of the game, other characters like Proto Man and Bass are missed opportunities that could have been used to spruce up the rather bland story of a power struggle between Dr Light and Dr Wily. And don’t get me started on the forgettable voice acting, or the sadly softened level soundtracks – which Mega Man was well known for; no more crazy experimental 8-bit melodies to sink into my head for a lifetime.

The addition of various challenge modes does help the game’s appeal beyond the main story mode, but if you’re only here for the main ride you may leave feeling a bit underwhelmed. While Mega Man 11‘s formula is fun, it doesn’t last very long. In sticking close to the gameplay of yesteryear Capcom have also recreated the length, despite the current gen offering space for so much more. You beat the bosses, you run through the few stages in Dr Wily’s castle and dispose of him, and then it ends. If you were hoping for a Mega Man 11 that not only revitalises, but pushes the series forward on a large scale, then don’t. Expect a vastly updated version of the Gameboy title you knew and loved as a kid, because if you’re going in with any higher expectation than that, you will leave bitterly disappointed.

Review conducted on a Nintendo Switch using a pre-release retail code provided by the publisher.