The LEGO franchise has become one of the least surprising in gaming – not because it’s become stagnant, but because it’s managed to hit the perfect balance of action, adventure and comedy within its titles. The franchise’s newest entry, LEGO DC Super-Villains hits all the same notes as usual, alongside some welcome new ones.

Character creation comes to the fore this time around, with players able to create their own super villain and bring them along for the ride. This was my creation, Aria, who beats people up with a shiny red guitar:

Your player character has the ability to absorb other abilities (think Peter Petrelli, for any of my fellow reformed Heroes fans), and teams up with a variety of dastardly criminals to cause chaos across the city – that is, until the Justice League is kidnapped and replaced by a disguised Crime Syndicate.

The current incarnation of the Crime Syndicate is relatively, having risen to prominence in 2013’s Forever Evil comic crossover, and they’re the perfect choice to go up against the villains of the DC Universe. Once the Crime Syndicate’s true intentions are revealed, Suicide Squad-style shenanigans ensue, and it’s up to you and your team of riffraff and super-villainy to save the world from true evil.

The story is fairly simple because of its younger target audience, with much of the violence and darkness of the DC universe toned down, but it’s still wildly enjoyable as an adult, and the humour shines through in even the grimmest of times. 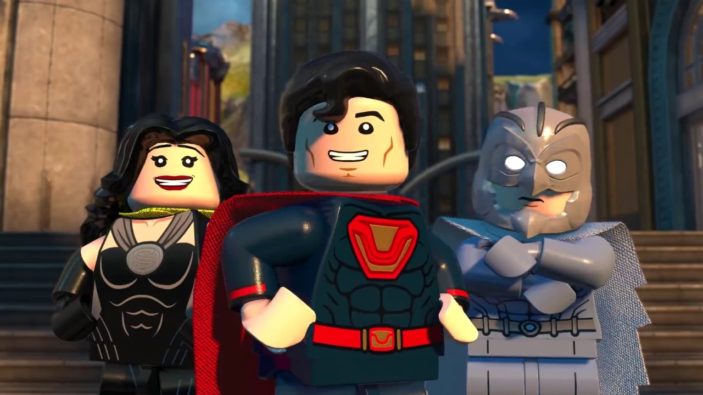 The game also features of the most star-studded voice casts of all video game, period. Surprisingly, and despite Mark Hamill’s frequent noises about retiring, his Joker makes a welcome return here alongside Tara Strong’s popular Harley Quinn. Also present is Kevin Conroy, returning as the best Bruce Wayne of all time and Nolan North, taking on the role of Ultraman.

It helps that the game also looks gorgeous, capturing all the charm of the wonderful world of LEGO and amplifying it across a range of neatly designed worlds. The look and feel of the franchise has come a long way since LEGO Island, and it wears the charm and fun appeal of its bricks well.

Despite everything new, the main action and combat of the game is still the weakest part of gameplay, and hitting the breaks repeatedly soon gets old. There’s an attempt to alleviate this occasional monotony as your player character gains a variety of new abilities as they traverse each level – but it doesn’t do enough to change up the core gameplay.

LEGO DC Super-Villains doesn’t re-invent the wheel – it sticks to the tropes and tribulations that have worked well for the LEGO franchise for years. Still, there’s plenty of fun to be had in all the right places, and it presents an original tale that shines across the board, and presents a great outing for all 80+ of your favourite DC villains. Those who haven’t yet found a LEGO title to love may not find it here, but for fans of the franchise; you’ll absolutely find more of what you already love.