Games Review: Forza Horizon 4 (Xbox One, 2018) has a rattle in the manifold, but you’ll love it anyway 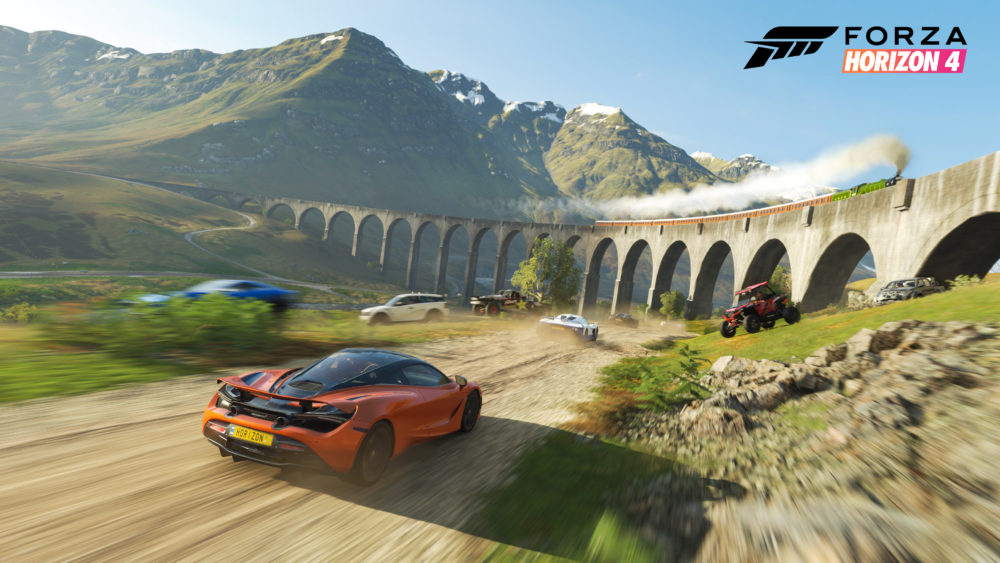 I’ve come to look forward to new entries in the Forza Horizon series more than any mainline Forza Motorsport title. Eschewing the more serious simulation of its sister franchise, the heart of Horizon is built around a single question — are we having fun? In Forza Horizon 4, the answer is still yes. It’s just taking a longer route to get there.

First things first, I want to commend developer Playground Games for setting their third racer in a row in a country that drives on the left (aka the way God intended). Forza Horizon 4 is set in Playground’s native United Kingdom, and is the first game in the series to introduce rotating seasons. Seasons aren’t just a cosmetic change either — they change the landscape, the race feel and the variety of events available for you to take part in. Cars slip and slide on icy roads in winter and aquaplane across puddles in rainy spring. Seasons change over in Australia every Friday at 12:30pm AEST and run throughout the week. By the time the game launches on October 2, Autumn will be in full swing. Further, real world time-of-day will be synced to your Xbox’s clock so make sure your timezone is correctly set. If you want to play at night, log on in the evening. If you want to play during the day, you’ll have to take the day off work. 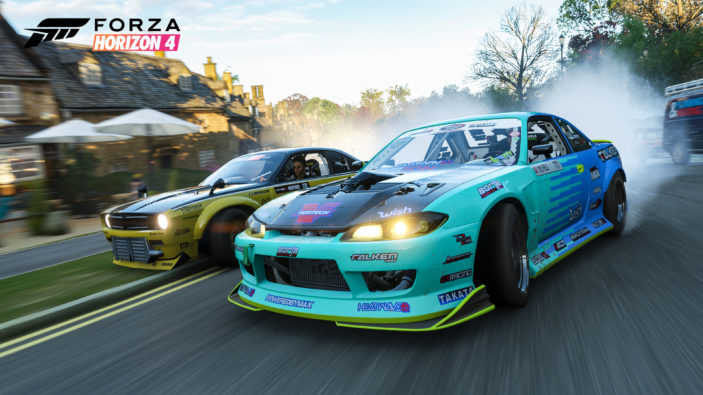 On top of rotating seasons, Forza Horizon 4 also marks the series’ first time moving to a shared multiplayer world. Previously, Horizon would record driver data on the fly to create a digital impression of you, goofily referred to as your Drivatar. This Drivatar would approximate your overall skill level, behaviour behind the wheel and taste in cars, appearing in your friends’ games whenever you weren’t playing with them in a party.

Drivatars still exist, and you can still play the game as a solo experience, but that’s all taking more of a backseat. At a certain point in my playthrough — after I’d run through the prologue as I understand it — the game quietly dropped me into its shared multiplayer world. Each time I log into the game I am allowed to play while the game seamlessly connects me to up to 11 other players in a single session. There’s no waiting around or lobby, you just carry on racing as you normally would and people are dropped into the game in the background. You’ll encounter them zooming around the world, sometimes heading for the same races you are, sometimes just dicking around.

And dicking around remains a core component in the Forza Horizon 4 experience. There’s nothing to stop you buying a $1.5 million supercar and driving it through a stone fence, down a hill, off a cliff and into a river. This is a game where the actual races are, for me at least, a means to an end. I want two things from any Forza Horizon title — I want cars and I want money, both of which are used for dicking around. One of Horizon‘s simplest pleasures is the act of buying an ancient, wheezing Datsun, dropping 100,000 credits on upgrades and watching it dust a McLaren off the line. 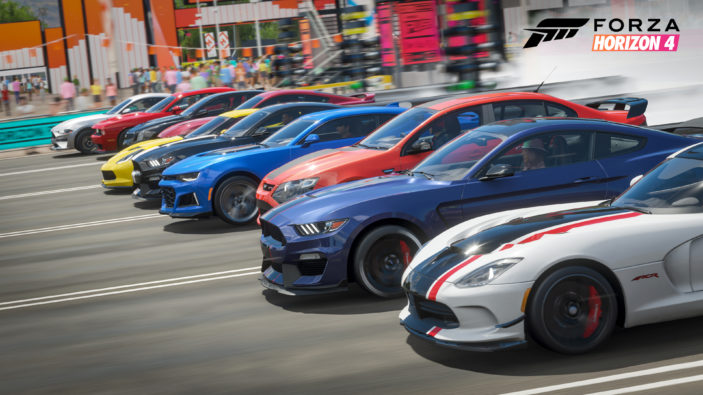 And herein lies my primary complaint with Forza Horizon 4 — it isn’t as easy for me to do that now. This is going to take some explaining, so please bear with me. In previous games, ones that weren’t tied to the idea of a perpetual online world, the process of earning new vehicles was very straightforward. Players would collect what are called Wheelspins, a slot-machine type mechanic that would dole out vehicles and in-game currency in return for completing score chases and level ups. It never felt like a gamble because you could only win one of two things — cars or money — and you wanted them both. You quite literally couldn’t lose on a Wheelspin.

But Forza Horizon 4‘s shared online world has given Playground clearance to go all in on the avatar concept they introduced in Forza Horizon 3. These avatars are, as far as I can tell, almost entirely pointless. They exist because the online component seems to demand something more personal, but I don’t see why the game’s myriad vehicle personalisation options couldn’t achieve the same result. You can’t customise your avatar’s basic appearance, you can only choose from a list of (admittedly very diverse) presets. They are then hidden within the car while you’re driving, that thing you spend 99% of your time doing in the game, before being jammed into victory and loading screens to justify their existence.

The real reason for their inclusion appears to be padding out the game’s unlock loop, with hundreds of cosmetic items to dress your avatar up in. And how do you unlock these items? That’s right, through Wheelspins, which are now rewards in the Horizon Life Campaign. Horizon Life is a massive wall of segmented, ongoing goals that range from wins in specific race types to multiplayer convoys and skill chains, some are much easier to obtain than others. This way, no matter what you’re doing, you’ll always working toward more Wheelspins. But, the thing is, once you have them, Wheelspins are so cluttered with cosmetics that successfully unlocking a car feels like a minor miracle. 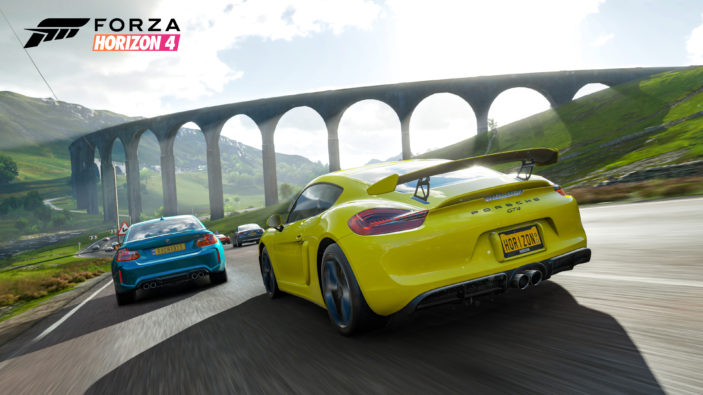 This is only worsened with the inclusion of the new Super Wheelspins, which dole out three prizes instead of one. These can be unlocked through normal play, but can also be purchased with real world money. Super Wheelspins presumably raise the odds of actually getting a car, but it didn’t seem to help. The amount of avatar cosmetics I’ve gotten from Wheelspins of both kinds dwarfs the number of vehicles and currency. Indeed, the only way I’ve found to ensure more regular car drops is to save ten Wheelspins up and use them all at once — the list of available prizes only seems to repopulate if I leave the menu, so if I keep spinning its possible to whittle it down to shit I actually want. At the very least, it doesn’t seem possible to get duplicates which means, if you can be bothered to play it that long, the game will eventually run out of shirts and hats to foist upon you.

Am I crazy for thinking the car I’m driving can and should be able to do the same job as any human avatar? Why do I need a leering, Fortnite-flossing buffoon to stand next to my car when I win? At least let me sell the cosmetics so I can turn them into something useful. I don’t get it, Playground. I’m with you on everything else but this. The poker machine aesthetic finally fits. You’ve successfully turned Wheelspins into gambling because it is now possible to lose.

I’m gonna go back to being nice to Forza Horizon 4 now because, beyond this one (very significant) gripe, I actually like the game a lot and don’t enjoy being mean to it.

I like Forza Horizon 4 because, in every other respect than the above, it gets out of your way and lets you call all the shots. Everything, from the car your driving to which races you want to tackle and when, their individual set up and even how to get there, is entirely up to you. It’s got a handle on its open world premise that Ubisoft’s ongoing tilt at the form, The Crew, just can’t seem to wrap its head around. There are hundreds of cars to choose from, unlock and hoon about in. There downside is that, with the exception of a few off-road vehicles, Mitsubishi, Toyota and Lexus have been scrubbed from the roster due to licensing issues. A significant blow to be sure, but Playground uses their absence to plump the lineup with plenty of on-theme British makes — there’s even a DLC bundle of James Bond cars for those who’ve picked up the Ultimate Edition.

The choice of the UK as a setting is a brilliant one, but the decision to eschew London as its hub city and place the spotlight on Edinburgh is inspired. The map is a mash up of locales from every part of the UK, lashed together in ways that are incomprehensible to people who actually live there, but make perfect sense in terms of video game map design.  Having been through this in Forza Horizon 3, Australian players will sympathise with their UK counterparts. We had to get from Surfers Paradise to Byron Bay by taking the Great Ocean Road past the Fraser Island shipwreck and the Great Apostles. We understand what you’re going through, friends. It makes no goddamned sense, just go with it.

Okay, okay, one more gripe real quick. This one’s really minor though, I promise. The way the game awards skill points has been altered from previous entries and I’m not totally sold on the thinking behind it. Previously, skill points were sunk into a single expansive skill tree that granted global buffs to the player, no matter what car they were driving. Forza Horizon 4 eschews this in favour of sinking skill points into individual cars. The assumption seems to be that players will have a few cars they really like for specific events and sink points into them to maximise their results. This may suit some players down to the ground, but it creates a bit of a problem for me. I don’t have a small clique of vehicles I use regularly. Rather, I’m constantly hopping into new cars for a test drive. If you’re asking me whether I like the car I’m in enough to spend a skill point on it, more often than not the answer is “I don’t know.” I’ve got over twenty points banked up now, Playground. Send help. 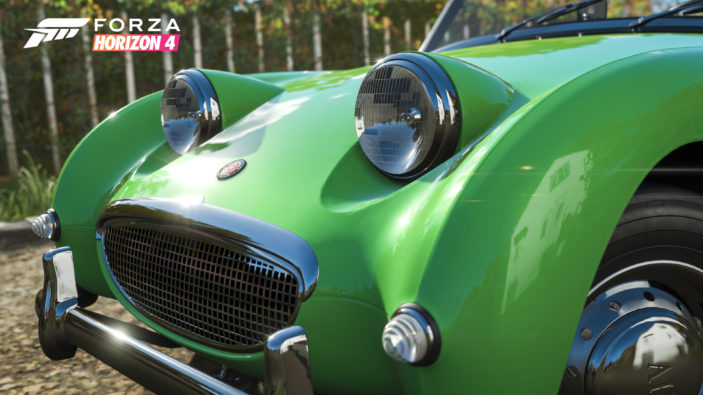 Graphically, Forza Horizon 4 is another feather in the Xbox One X’s cap, pumping out visuals that regularly fooled my eye into thinking they were real for a second. If you have an Xbox One X and a 4K HDR television, take this litmus test: set the game to Quality mode, head out to the freeway at night, switch the camera to the full cockpit view and just go for a drive. See that reflection in the wing mirror? Doesn’t it look uncannily like the real thing? These kinds of graphical touches are everywhere. It’s gorgeous work across the board. The way rain beads against vehicle paint. The way dirt and mud scuff up the side of the car and are washed off by splashing through a puddle. The way frost builds up around the rear of the car as your wheels spin up ice and snow. The way the sunlight changes moment to moment as clouds scud across the British sky. If you’re looking for a demo game to show off the raw power of your Xbox One X, Forza Horizon 4 is it. I’m continually blown away by how pretty it is. Xbox One X owners will find the game runs at a locked 30 fps in the 4K HDR Quality mode or 60 fps in the 1080p HDR Performance mode.

Beyond all the avatar nonsense, Forza Horizon 4 is more or less the game I wanted it to be. The series still lives at an intersection of arcade and simulation racing that is entirely its own. It’s fast, refreshingly self-aware, gorgeous to look at and fun in a way that other racers like The Crew 2 and Need For Speed are still trying to grasp. I live in hope that Playground will release DLC that lets me drive that huge hovercraft.

Review conducted on an Xbox One X with a Forza Horizon 4 Ultimate Edition review code provided by the publisher.