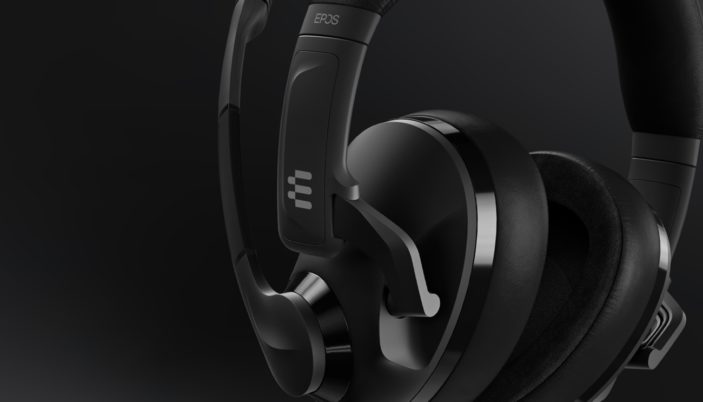 The EPOS H3 is the latest gaming headset from Sennheiser’s nascent gaming arm. Though Senny has released scores of gaming headsets in the GSP series, the EPOS label now picks up the slack.

In the H3, EPOS seems to be trying hard to veer away from the chunky, heavy GSP range and into something more sleek and comfy.

The aesthetic of the EPOS H3 is function-over-form. The standard model is all black everything, with a two-tone black and white version to match the PS5 also available. Padded leather earcups and headband, with a felt trim inside the cups. Strong build quality and lightweight materials. It’s much less aggressively masculine than the GSP’s. The slimmer, curvier new shape allows it to look similar to its marketplace contemporaries.

There’s only one dial on the H3’s, a large circular wheel on the right earcup for volume up and down. Attached to the left earcup is a chunky boom microphone that supplies crisp, clear comms. The microphone suffers for being non-detachable. It can be placed upright, out of the way, but not removed. For those who prefer to ditch the headset mic, unfortunately, you’re stuck with it.

The H3 is a wired headset. This won’t surprise to anyone with a pair high-end EPOS or Senny cans. The reason for this is greater audio fidelity, and we’ll get into that in a minute. The headset connects via 3.5mm audio cable. I currently have mine plugged into the EPOS B20 microphone we reviewed last week. The headset is also compatible with PlayStation 5 and Xbox Series X|S controllers.

The downside to a cabled headset is you’re tethered to the connected device. There’s also the sad truth that the prevalence of 3.5mm audio jacks had substantially diminished since Apple took its hard stance against them, so it may be hard to find a device you can use them with beyond your desktop PC, your controllers, and streaming mics. Having that dirty great microphone stuck on the side of your head might make you think twice about wearing them in public as well.

These critiques aside, the EPOS H3’s are light and comfy enough to be worn for hours at a time.

The sound of your heart

With all that out of the way, let’s talk about the most important aspect of any headset — the audio. These are closed-acoustic headphones. This means they cut out a great deal of external sound, allowing you to focus on your game at hand.

The soundstage is extremely wide, allowing for great positional audio. In games like Apex Legends and Fortnite, where sound is key, the H3’s excel. But they’re fabulous beyond this. The roar of the engines in F1 2021 rattled my teeth. I was able to pick out audio cues in a heated Sea of Thieves naval battle. It even made my Fuser mixes sound good!

For all other tasks — music, podcasts, even online meetings — the H3’s passed with flying colours. The EQ is quite flat out of the box, meaning it’s (broadly) ready to go without any setup. Bass tones are resonant without overpowering the higher end, meaning everything comes through crystal clear.

Your view of whether the EPOS H3 represents good value for money or not will depend on what you want out of a headset like this. If you want a headset happy to be day-to-day travel cans AND your dedicated gaming heaphones, they may not stack up. If you’re looking for a full-time set of gaming cans you can use at home, then I think they make an incredibly strong argument for themselves.

You’ll want to be sure, because here’s the thing. They retail for $179 AUD. If you’re quick on the draw, you might get them a bit cheaper at JB Hi-Fi right now (at the time of writing, they were reduced to $129). It’s a prosumer tier headset, with a price tag to match.

With a level of comfort and audio reproduction that rank among the best on the market, it’s very easy to recommend the EPOS H3. Just make sure you know what you want from them first.

Review conducted using a retail headset provided by the manufacturer.