EA Sports’ golfing games may have missed the spotlight for the better part of seven years, but that won’t stop the franchise from heading back onto the fairway for another round. We recently got an inside look at EA Sports PGA Tour, as they unpacked the new and exciting features, licenses, gameplay and inclusions that are set to make this golfing experience one of the most extensive, nuanced and robust of its kind.

The presentation wasted no time in revealing that all four men’s majors are included in this year’s game, an exclusive inclusion that rounds out some of the sport’s most prestigious and popular moments throughout the year. The Masters Tournament, PGA Championship, U.S. Open Championship, and The Open Championship will all be accessible to players from the get-go, along with 30 courses; comprised of 28 real-life courses and two fantasy courses. That being said, EA Sports PGA Tour won’t be resting so soon, as it plans to release more beyond its launch. But from the Augusta Nationals Golf Club, to Torrey Pines and the birthplace of the 18-hole round itself, The Old Course at St Andrews, there’s no doubting we’ll already be spoilt for choice. 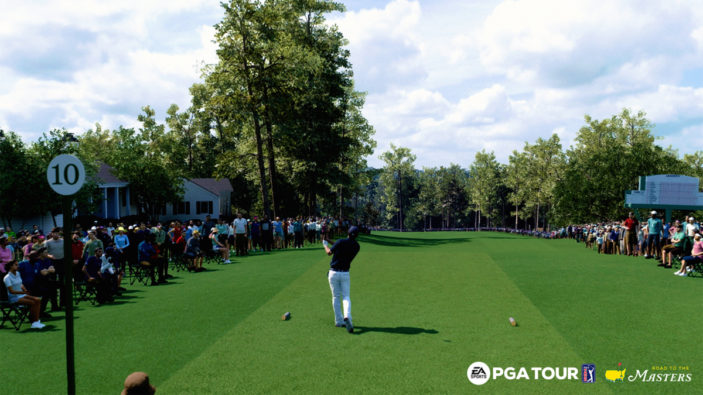 It’s also worth noting that EA Sports PGA Tour will be leaving last-gen consoles behind, crafting a new and exclusively next-generation experience that looks incredibly stunning, given the freedom that comes with new technology. Greens are lush, lakes and ponds are eerily reflective and courses have been recreated with painstaking accuracy and photorealism. Player models have also been given an impressive amount of detail, with most fan favourites and world champions outlining the roster. Scottie Scheffler, Cameron Champ, Xander Schauffele, Kelly Korda and Jordan Spieth will feature, although it seems like a more robust list of players will be revealed closer to launch, along with additional players post-launch.

In terms of gameplay, EA Sports PGA Tour will feature the brand new Pure Strike gameplay, allowing players to take advantage of over 20 different shot types in order to conquer the green. The challenge soon becomes the approach and intention, as much as the club selection and shot accuracy. Thanks to motion captured stances by every golfer in the game, no two swings will ever look and feel the same. You’ll still be able to utilise each analogue stick for your general swinging mechanics, but the nuanced attributes that accompany each shot are sure to add yet another layer of depth and authenticity, bringing more accurate ball behaviour and course dynamics with detailed feedback. Those who have played previous entries will also be glad to know that Big Hit moments are set to return, with cinematic camera angles and slow motion shots adding tension to otherwise excellent shots and close calls.

EA Sports PGA Tour will include a number of unique modes at launch, including a dedicated career mode. This mode will incorporate all three legs of the FedEx Cup Playoffs, along with THE PLAYERS Championship. The LPGA will also feature, highlighting both female players and LPGA events such as the Evian Championship, where players can compete against the best LPGA athletes. Other games modes include the traditional Quick Play, along with online Social and Social Unranked modes, Tournaments, and Private Matches. Online modes will also offer timed seasonal events, where up to 16 players can compete simultaneously.

EA Sports PGA Tour is looking incredibly fine, and a worthy addition to the golf gaming landscape. And the best part? It’s right around the corner. EA Sports PGA Tour will launch on March 24, 2023 on the PlayStation 5, Xbox Series X/S and Windows PC.