Disintegration Review: A unique shooter, but only flashes of potential

Aggressively blending real-time strategy and first-person shooter elements works, on paper. Disintegration is the latest title to hybridise the two genres, promising a new kind of gameplay that, while interesting, lacks the necessary depth to truly set it apart from novel sci-fi games of the past.

Driving the hype behind this game is the involvement of one Marcus Lehto, founder of developers V1 Interactive and most famous as the co-creator of Halo. His experience building Master Chief and the resulting sci-fi adventures bleeds through well with Disintegration, hinged on the idea that Earth is no more and that the real future is a process of “Integration”, whereby human brains are transplanted into robots.

Though this approach to transhumanism was only meant to be a temporary fix to the whole end of the world thing, a military group called Rayonne sought to force Integration as the new normal. As the player, you’re Roman Shoal, and you’re crew is part of a rising resistance trying to take down Rayonne. As far as set-up goes, it’s a good story.

Lehto’s vision is inventive and feels urgent. The problem is that this intriguing narrative isn’t explored as in-depth as one would hope, relegating much of the game’s story to barely-there cut scenes and in-gameplay banter that doesn’t amount to much in the way of revealing motivations or feelings, from either side of the good-bad dichotomy.

A Hoverbike With Guns 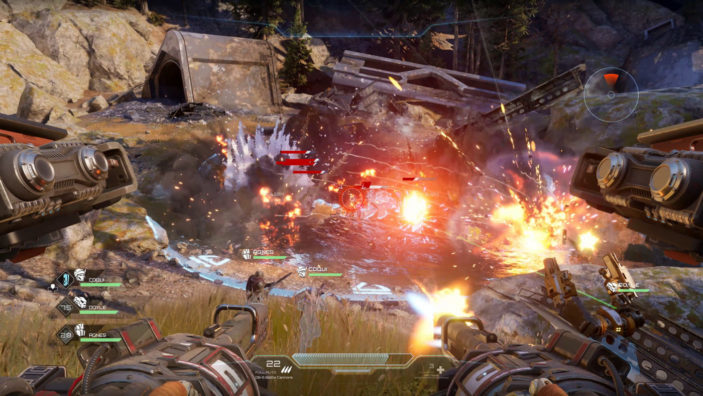 Disintegration’s main schtick is the vehicle on which you oversee each mission. As Roman Shoal, you fly through levels on something called a Gravcycle, hovering high above the combat while the rest of your team is made up of specialised ground units. You command these ground units, which is where the RTS elements come into play, while simultaneously shooting at enemies from the sky.

Each of your ground units possess cool-down-reliant special abilities which you need to maximise in order to successfully navigate the otherwise hum-drum combat. While you’re up in the sky, those ground units are extensions to your play style, throwing grenades and organising mortars so you basically can carry multiples weapons at a time without physically doing so. It’s akin to the Fallout companion system in some ways, but also slightly reminiscent of the gifted squadron that defines Clive Barker’s Jericho.

It’s a shame that character models are so incredibly shallow and dull that gameplay just doesn’t look good, especially when you’re peering down and trying to keep track of these distant figures that really don’t look all that different to the enemies. The fast-pace of the game and the fact that you must handle multiple mechanics at once (command your squad, fire your own weapon, fly up/down, and scan the environment) makes this a great annoyance and, combined with jarring difficulty spikes, makes it more tempting to avoid the learning curve rather than run with it.

Settings are nicely built despite the repetition, and maps are open and flexible enough to give you room to develop your own play style, but this thoughtfulness doesn’t really extend to your ground units. Sure, you’ve got a great view flying high up in the sky, but your ground units draw the short end of the stick as they wait for you to command them towards cover. The units don’t actually take cover themselves, you just have to kind of strategically place them near cover and hope for the best.

Too Hot to Handle 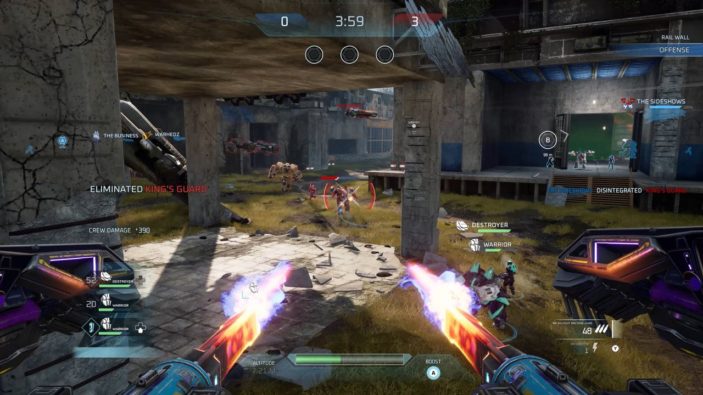 Flying around and trying to FPS at the same time does get frustrating frequently, particularly with the zoom function which you have to toggle on/off as opposed to it being activated by holding down a bumper. While zoomed, its much easier to lose the entire scope of the action, and track of your units.

Units die easily, but they can just as quickly be resurrected since they are Integrated themselves. All you need to do is swing in and pick up their “brain” within the short time limit, which gives you another thing to manage and can break up the action constantly.

It would have been nice if you could customise the Gravcycle loadout for each mission, as well as map certain abilities to different units. But alas, the game is rigid in this respect, and it’s all down to you collecting chips throughout missions to upgrade both yourself and the units who serve your every command.

A Balance of Style

With all its faults, Disintegration is still a lot of fun once you manage to balance its two totems. You can’t go in all guns blazing like any FPS, and you can’t rely on your units to RTS your way to victory either. You have to carefully judge each situation and prioritise targets accordingly, which means the game is much more interesting once a greater range of villains come into play.

That won’t happen until your around halfway through the game, which begs the question is it worth the investment at all? Luckily the game really isn’t that long, and a solid playthrough could get you to those meatier missions in just one day. If you’re willing to put in some work, you’ll at least be rewarded with some great gameplay.

Like Halo, Disintegration will be at its best once a network of players emerge. Multiplayer is as fun as you’d expect, removing many of the pitfalls that plague story mode’s gameplay and just putting you in with other players so you can blast away at each other. Settings are still repetitive with not nearly enough variety, but at least maps are large and offer plenty of approaches.

Disintegration was always going to be a risk. Blending FPS and RTS gameplay isn’t done often for good reason, but it seems V1 Interactive was at least able to come up with a compelling and straight-forward way to do it. Unfortunately, this also means that you’re handling too much at once, juggling plenty of mechanics for the small pay-off of a fun shooter. There are plenty of fun shooters out there that don’t require you to do this, so it’s all on you if you want to give yourself something slightly off-kilter.

From the novel perspective, Disintegration works. But you’ll need to put up with a lot of doubt and “what am I getting myself into?” before V1’s vision becomes a bit clearer.

Review based on PlayStation 4 code supplied by the publisher.