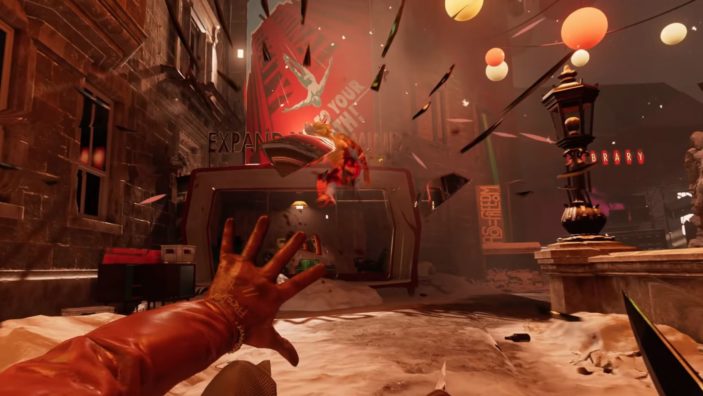 With the just-released Returnal proving popular among players and critics, Arkane Studios is preparing Deathloop, a timeloop shooter of its own. The era of the AAA rougelike, it seems, is upon us.

Deathloop is a first-person immersive-sim shooter heavily inspired by the blaxploitation cinema of the 1970’s. In the game, hero Cole Vahn awakens on a mysterious, heavily fortified island called Blackreef. He has a vague memory of drinking the night before but can’t really remember anything beyond that. As Cole begins to piece his situation together, and the timeloop in which he is now stuck, he is intercepted by a woman named Juliana Blake. Jules is a Visionary, one of an elite ruling class on the island. She’s a prickly sort, dedicated to “protecting the cycle.” In moving to slay each of the Visionaries and end the loop, Cole has made himself a threat. Jules is determined to cut him down.

Deathloop uses all of Arkane’s considerable level-crafting ability to give players an open-ended world to explore. Like Dishonored before it, Arkane wants you to think outside the box to accomplish your goals. It’s important to Arkane that, if you come up with a plan, the game says never says No, no matter how hard or unlikely it is to pull off.

The island is split up into several areas, each of which can be tackled at different times of day. When you decide to strike is as important as how. The idea is that, over multiple runs, you’ll gather intel on each of the Visionaries, their movements, and calculate the best moment to take them out.

Jules can show up at any time and will prowl about until she can get a clean shot on you. When she rolls through, you have two options: commit to complete stealth and evade her, or sniff her out and kill her first. She throws a crucial spanner in the works, forcing the player to adapt or die. Arkane sees this as a positive stressor, not a negative one. Evading her sight might push you into nooks and crannies you hadn’t found before, creating new opportunities for next time. Move, Learn, Die, Repeat.

Jules can be controlled by a real, human player invading your game. This can be one of your friends, or it could be a random drop-in. This increases the intensity of each run, because now you have a real person looking to get the jump on you. She can be set to AI only if you don’t like the idea of someone actively trying to snipe your run, but Arkane stressed throughout the presentation that the game was designed with a human-controlled Jules in mind. The mechanics surrounding Jules obviously have interesting implications for people who plan to stream the game. I’m interested to see if and how Arkane will handle deliberate stream sniping.

Same as it ever was

All this, in total, is the core conceit. You have one full day from the beginning of each loop to assassinate all eight Visionaries and evade Jules’ clutches. Death restarts the loop, and your current run. Each run will, ideally, yield new information you can use to achieve your goal.

It shares a conceptual space with another puzzle-box action series, Hitman. In the thirty minutes of hands-off gameplay we were shown for this preview, it was clear that there was a significant design crossover between the two games. There’s a lot of planning, a lot of waiting, and experimenting. A trial-and-error mindset and a great deal of patience are the ultimate keys to success.

The collision of memory loss and mechanical memorisation is another point of comparison. It’s certainly an interesting wrinkle to throw into the roguelike arena, one that seeks to deconstruct the genre a little at a time. Returnal dug into similar concepts, slowly returning memories to the player as they went. It’s interesting that both Arkane and Housemarque reached such a similar conclusion, but both appear to use it as a springboard to very different things.

Deathloop launches September 14, 2021 exclusively on PlayStation 5. It will come to Windows PC at a later date.