Cult of the Lamb Review: Worship like a baa-ass 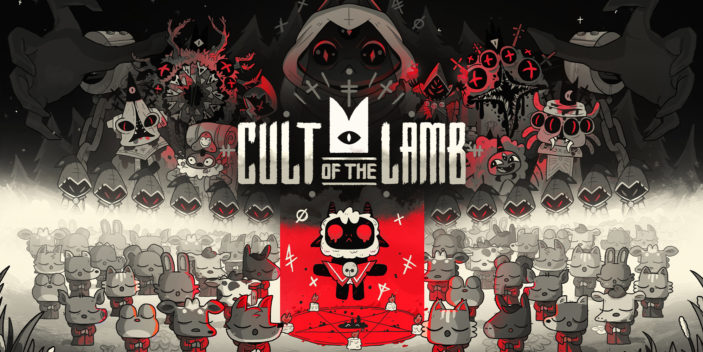 There are two kinds of people in this world: those who already have a real life army of followers dedicated to praising their glory, and those who simply fantasise about it. I’ll leave it to your imagination as to which camp I’m in, but why let cult dreams be dreams when you can act out your wildest worshipping realities through Massive Monster and Devolver Digital’s latest rogue-like action-adventure game, Cult of the Lamb.

Gamers start their adventure at the end of their life, playing as the last adorable lamb left in this world of false prophets. Just as said lamb is about to be sacrificed before the four bishops of the Old Faith, you are saved from becoming the literal sacrificial lamb by a cat-eared demonic deity, aptly named “The One Who Waits”. In exchange however, they demand you start a cult in its name through the cultivation of gullible woodland worshippers, giving power to both Mary’s pet and our new feline overlord. The eventual end game for our fluffy friend, is to the defeat the four bishops and set free “The One Who Waits”.

Crusader by Day, Manager by Night

To achieve our goal as the ultimate supreme leader, the gameplay is divided into two distinct portions, the first of which is dungeon-crawling. Here the lamb embarks on one the four Lands of the Old Faith to collect resources, rescue potential followers and hone battle skills by fighting against beastly non-believers. Dungeons are randomly generated, so no two forest forays are ever the same, even down to the weapon you start off with, the enemies within and power-ups from a tent-shaped Tarot card reader, Clauneck. I found smacking enemies with melee weapons extremely satisfying through the combination of bone-crunching sounds and the light vibration of the controller with each hit. This to me was strangely reminiscent of Musou games like Dynasty Warriors where beating infantry-level opponents was basically a form of therapy. Magic weapons add extra variety to the fights, but must be used tactfully via Fervour that the lamb must gain to activate. 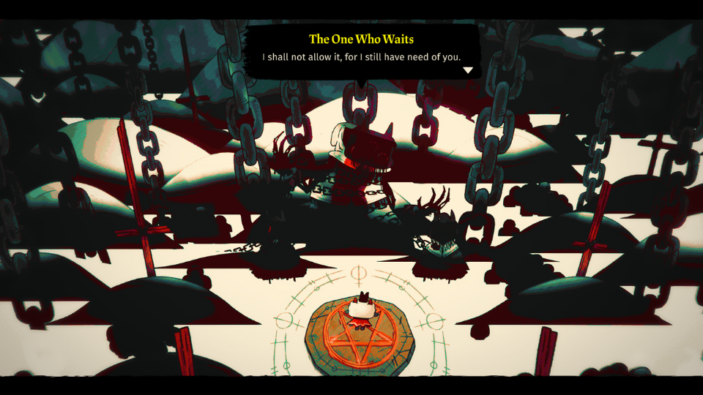 While the dungeon map is initially hidden, there is an overarching path that you can choose with markers that indicate what each section may provide you with. Clear the area and you’ll be rewarded with a new follower or additional resources like wood and stone to help build your fanatic community. The last section of any dungeon features a mini boss battle that’s a couple of steps trickier than the usual minions. Defeating it usually means the acquisition of another follower plus some juicy bonus resources however losing simply reduces your bounty and sends you back home without dying. It pays to have friends in low places I guess. 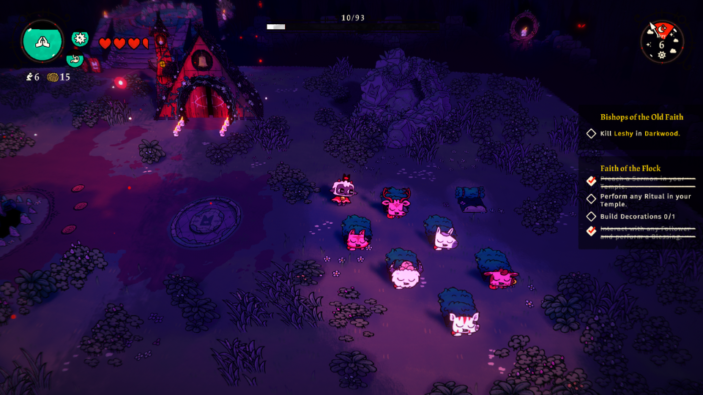 The other half of Cult of the Lamb lies in some base building which feels like a cross between Age of Mythology and Story of Seasons. Recruiting more followers comes with the added responsibility of building a a community for them including farm lands for food, a shrine to conduct sermons and the all important totem for worshipping. As any drone of a workforce can tell you, there is a special place in Hell for people management, which makes complete sense as to why it’s here in Cult of the Lamb. Everything seems relatively straightforward at the beginning, but as your flock grows to double digits, it becomes increasingly difficult to cater to all of their demands from feeding to cleaning up their vomit to building enough beds so they don’t angrily sleep on the floor. 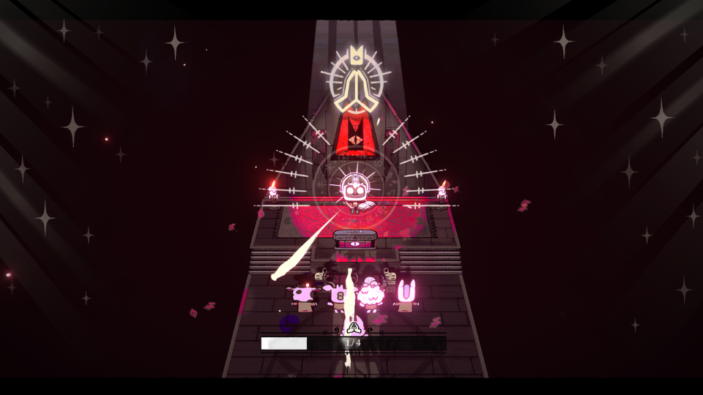 If I had the foresight, I would have named my followers the “Cult of Karens” because they seemed to always have a problem that they needed to speak to me about. On top of their day to day, followers will also randomly generate requests which pile onto my never-ending task list. One task was to feed someone a Deadly Dish which I did only for them to die immediately which caused a significant drop in my Faith. I did what any good Samaritan would have done and harvested their body for Follower Meat (my Asian mother taught me to never waste food) which made the remaining followers even more livid; talk about a tough crowd. There’s always a need to satisfy, a building to upgrade or a ritual to conduct which keeps lamb very busy. The task list helps you stay on track and reminds you of the big picture, so you don’t spend all day chopping wood, which I totally did not do. Oftentimes I found myself high-tailing it for another round with dungeon-crawling beasts, as it seemed to be less stressful than trying to make my followers happy.

Cute is Two Letters Away From Cult

The art and design of the game is simply too gosh darn cute and even that seems like a highly strategic move by Massive Monster. After all, the only way one could develop a game with so many dark and demonic motifs is by making it as adorable as a picture book for five-year-olds. Having the protagonist take the form of a lamb is a nod to religious references that commonly have the said animal represent purity. This creates a nice contrast with “The One Who Waits” being a giant black cat, a universal omen of death approaching. There’s plenty more Easter eggs to be found some of which I may have missed because I am more rainbows and unicorns than death metal nihilist but it’s a game that is visually stunning enough to appeal to both camps.

I also love that the followers are customisable except for their names which are randomly generated. This definitely speeds up the process where I’m usually stuck for fifteen minutes each time, trying to think of a witty pun. My initial plan was to have a colour-coded army of pink and white fluff balls to do my bidding. I very soon realised my big mistake as it became impossible to differentiate them so I could no longer find the original person who had sent me a request. Rookie cult leader mistakes.

It would be remiss to not mention the music. After his previous work composing for Massive Monster’s Unicycle Giraffe, Narayana “River Boy” Johnson is back with more pop-electro tracks and mashed with sounds that wouldn’t be out of place at a funeral setting. The music is a little creepy and kooky in parts, especially setting the scene when you’re off into the Four Lands of the Old Faith. It transitions to more soothing vibes at camp that gives Cult of the Lamb a cosy feel, but there’s always a feeling like something is ‘off’. Punchy electronic tunes keep the game feeling modern and fresh, which is uplifting when the screen tends to be predominantly black, white and red. 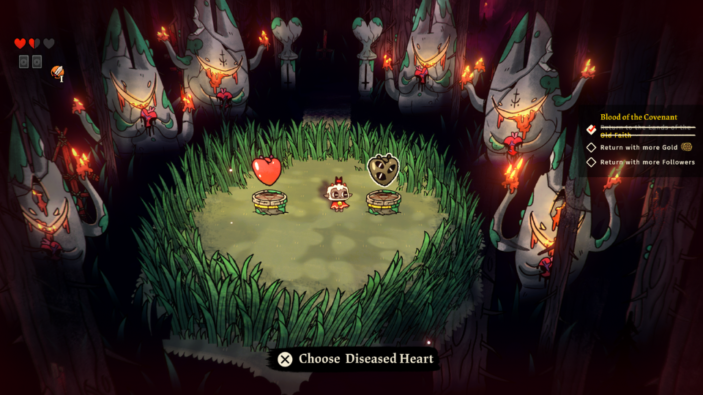 Cult of the Lamb is everything I thought it would be; and there’s more to come. In just a few hours of playtime, I know I’ve barely uncovered the full potential in how much there is to do in the game. There’s also Twitch Integration called “Companion of the Lamb” which wasn’t available at the time of review but is something I plan to test upon game launch. There’s mentions of allowing your Twitch Chat to become a follower and actively participate via Help or Hinder channel interactions which is honestly too perfect because I mean, what has more parallels with cult behaviour than Twitch streaming. I can only hope that potential content updates continue the strong path that Cult of the Lamb has started. We are all but humble servants answering the call of “The One Who Waits”.