Believe it or not, Call of Duty: Vanguard was just announced. And with that release trailer barely two weeks old, PlayStation owners got the chance to test a slice of the multiplayer pie that is yet to come; Champion Hill. For what’s being touted as a brand new mode, feels like a callback to the ‘Gunfight’ mode introduced in 2019’s Modern Warfare. And given developer Sledgehammer Games is using the IW8 Engine, it also feels a lot like Modern Warfare, which used the same engine.

The premise of Champion Hill is simple; 8 teams must compete in small, one-minute battles across four maps, aptly named the Airstrip, Trainyard, Market and Courtyard which are spread about the training grounds. These four maps sit round a central arena, where each match begins. You have a minute in this central arena, where each team gets the chance to purchase equipment before heading into a map against a randomly assigned opposing team. Be it duos or trios, your team will get 12 or 18 lives respectively, as you compete in head to head matches. Lose all your lives and your team is eliminated. This process repeats until there’s a single team standing; hence the term Champion Hill. 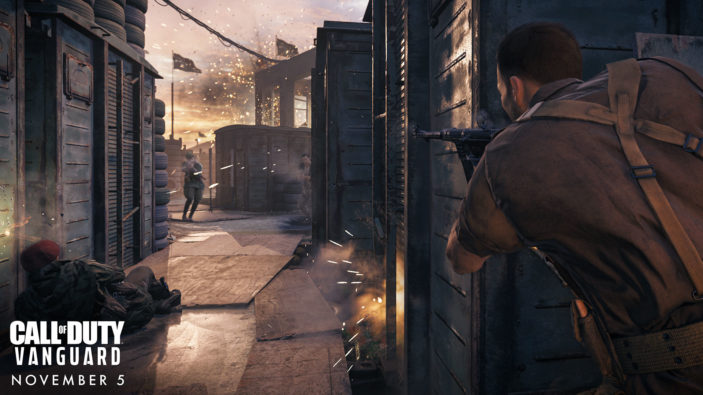 Given the blisteringly paced one-minute rounds, the action is intense, but it’s admittedly tough to get into any sort of groove or rhythm that if, like me, you need some time to get going, matches will end all too quickly. Beyond that, gunplay feels incredibly smooth and responsive, with the time to kill now much shorter compared to Black Ops: Cold War. While it can be frustrating to go down in a couple of shots, it gives Vanguard a tactical edge as you feel more exposed, and tend to take caution, particularly around corners. A somewhat traditional range of weapons are on display here, from the iconic Thompson M1A1 and MP40, to the fan favourite MP44 and Kar98K rifles.

It’s also worth nothing that these weapons are upgradeable on the fly, but it seems unclear if you will start with a randomly assigned weapon, as you do in the Alpha, or if we’ll be able to take a custom created class into the fold, where can then purchase other weapons, should we change our minds. This is in no way a nitpick, and will most likely assign players with predetermined weapons to set everyone on equal playing field. Unfortunately, there isn’t really much more to this Alpha than that. I didn’t necessarily come across any server-based or technical issues other than the odd hitch in frame rate perfromance.

Overall, my impressions of the Call of Duty: Vanguard Champion Hill Alpha were overwhelmingly positive, mainly thanks to the IW8 engine. Put simply, Modern Warfare just felt more satisfying to play, and the return to a World War 2 setting feels fresh enough that I’m open to some older iconic weapons.  All I can really ask for at this point in time, is more Call of Duty: Vanguard.

Call of Duty: Vanguard will release on the PlayStation5, PlayStation 4, Xbox Series X/S, Xbox One and PC, November 5, 2021.