Battlefield 2042 might just be enough to bring me back to Battlefield.

In BF’s recent absence, Warzone and Modern Warfare have drawn many competitive shooter fans over to the Call of Duty franchise in the past few years. myself included. But a recent hands-on with Battlefield 2042’s Open Beta reminded me exactly why I’ve missed the Battlefield franchise. EA and DICE have pulled out all the stops, prioritising a huge sense of scope, sandbox gameplay and tactical mechanics that combine for a flurry of first-person shooter excellence. Numerous additions to the solid formula push the franchise forward in interesting ways, while allowing Battlefield’s identity to remain intact.

Jumping into Battlefield 2042 felt both familiar and fresh in all the right ways. The beta allowed us to choose one of four specialists; Webster Mackay, who utilises a grappling gun, Maria Falck, a medic who can provide health and revive, Boris Guskovsky, an engineer and weapons expert and Casper Van Daele, a drone operator and recon expert. Each specialist’s abilities feel unique and useful; even if I spent most of my time wielding the grappling gun like Tarzan on a rampage.

Gunplay feels tight and responsive, and weapons themselves are unique and versatile. Thanks to the ‘Plus System’, weapon customisation has been greatly enhanced, allowing you to swap attachments on the fly. The mechanic itself is easily accessible and effective in the heat of battle. By holding a single button, players can view attachments, neatly aligned in the shape of a plus symbol and equip scopes, magazines, barrels and handles. The large scope and breadth of the choice and opportunity on offer here are truly unprecedented, determining both your approach and play style at any given moment. 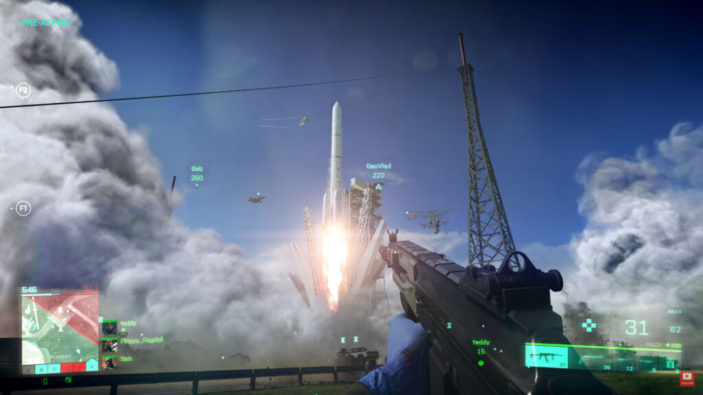 The beta focuses on the iconic Conquest mode, in which two teams must capture multiple points across a map in order to win. In most cases, Battlefield’s Conquest mode is usually determined by the quality of its maps, and although we only got access to one, Orbital feels like a recollection of Battlefield’s greatest hits. An open, sweeping landscape? Check. A variety of structures and an enormous sense of verticality? Check. A central set-piece that affects the course of the match and state of the map? Double check.

That’s right, as Orbital centres around a rocket launch. The launch of the rocket itself could take place at any time through the match, and once in its launch countdown, players can damage it enough so that it explodes; all over the map. It was a sight to behold the first time, but even after numerous matches, I found it too hard to resist. Rocket go boom, it’s just that simple. Pair this up with the added emphasis on clusters, in which players and teams must band together in order to take smaller points around a within a larger, main point allows for a smoother sense of pace and stability. Encounters don’t feel as random and far between, as combative zones have been expanded.

As fans would have seen in previous trailer, weather conditions now play a large part in determining how matches unfold. Gorgeous visuals aside, stormy weather adds an unexpected level of tension to the tone and pace of a match. It’s at this point I must reveal I have a confession to make. I’m not overly fond of stormy weather. But my first encounter with a flurry of lightning strikes followed by a homicidal cyclone was truly absolutely horrific, as it swept through structures and players alike. It’s truly hilarious to see players from opposing teams put their bloodthirsty tendencies aside to escape a large, destructive tunnel of wind.

While I am yet to experience it, we were notified prior to our hands-on that the storm itself can destroy the rocket during launch, let it be known, that I will wait with pleasure until that glorious day. There’s still much more to discover and experience, but the importance placed on weather effects feels like it will make a larger impact on certain maps and modes upon release. Top it all off with ridiculous 128 player matches, and you’ll find chaos on all fronts. 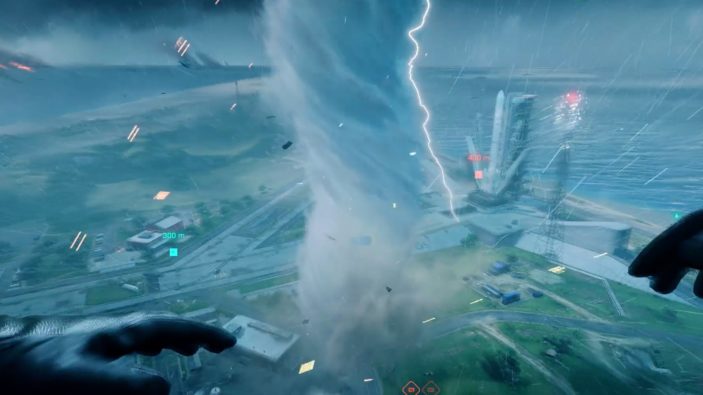 Overall, my time with Battlefield 2042’s open beta bas largely positive. The overall structure remains the same thanks to tight gunplay and expansive locales within the tried and tested Conquest mode. But the frightening dynamic weather effects and intuitive set-pieces remain the star of the show, as features I cannot wait to dive into throughout additional modes and maps. A small taste of what’s to come has left me wanting more. It’s time face my fear of storms.

The Battlefield 2042 Open Beta will be accessible to all players from October 8-10, before the game launches all major consoles and PC on 19 November, 2021.