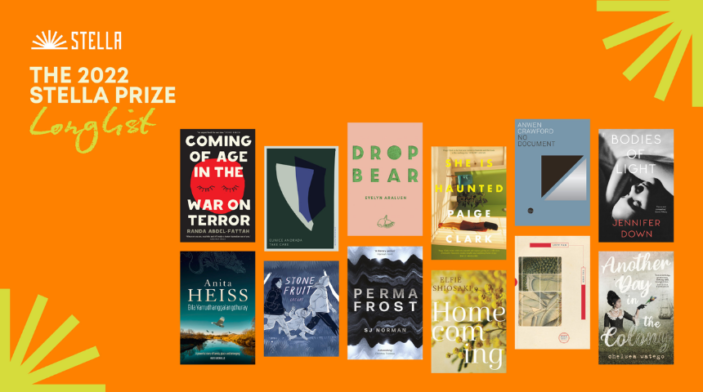 “What is original, what is excellent, what is engaging?”

These were the guiding principles for this year’s panel of Stella Prize judges, who were tasked with choosing a longlist of just 12 from more than 200 entries across fiction, non fiction, graphic novels and poetry. The prize, now in its ninth year, was founded in 2013 to celebrate exemplary writing by Australian female and non-binary writers.

2022 is the first year that poetry collections have been eligible to be entered into the running for the $50,000 prize, and so it is gratifying to see that four collections have made it to the longlist.

Speaking from The Wheeler Centre on Monday night, chair of judges Melissa Lucashenko asked for patience if she seemed a little off her game, given that she had just flown in from Brisbane where they are currently facing life threatening floods. She was joined by fellow judges Cate Kennedy, Declan Fry, Oliver Reeson, and Sisonke Msimang, the latter of which appeared from Western Australia via Zoom.

Each longlisted writer will receive $1000 thanks to the Copyright Agency.

The longlisted titles are:

You can watch the full announcement, led by Stella Prize Executive Director Jaclyn Booton and judging chair Melissa Lucashenko below:

Lucashenko encapsulated the enduring importance of awards like The Stella Prize, stating that:

“In the aftermath of Black Lives Matter and #MeToo, Stella writers are not holding back… Australian women and non-binary writers are producing innovative, sophisticated literature in very difficult times. It has been a great privilege to read and assess their work for the 2022 Stella Prize.”

For more info, head to the Stella Prize website HERE.