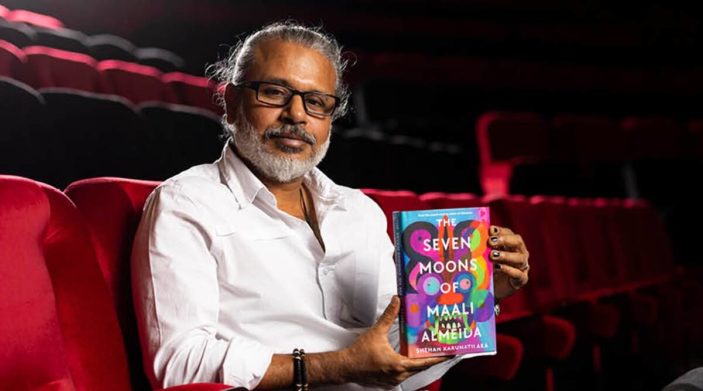 Shehan Karunatilka‘s story of a war photographer who wakes up dead in a celestial visa office and has ‘seven moons’ to try and solve the mystery of his own death has taken out the 2022 Booker Prize. The Seven Moons of Maali Almeida (published by Sort of Books) is Karunatilka’s second novel and was announced as the winner of the prize at a ceremony held in London on October 17.

Chinaman, Karunatilka’s debut novel, won the Commonwealth Book Prize and the DSL and Gratiaen Prize in 2011. In addition to writing novels, he has also written rock songs, screenplays and travel stories. This win makes Karunatilka the second Sri Lankan author to take out the Booker Prize.

Of his writing style, Karunatilka said he borrowed Kurt Vonnegut‘s “gallows humour to make sense of the afterlife my characters were stuck in and the circumstances under which they perished“. In a longlist interview, he said the idea for the book came to him in 2009 after the end of the Sri Lankan civil war, “when there was a raging debate over how many civilians died and whose fault it was. A ghost story where the dead could offer their perspective seemed a bizarre enough idea to pursue, but I wasn’t brave enough to write about the present, so I went back 20 years, to the dark days of 1989.”

You can watch the announcement and Karunatilka’s acceptance speech below.

Neil MacGregor, the Chair of the Booker Prize 2022 judges, said The Seven Moons of Maali Almeida was ambitious in its scope and the judges enjoyed the “hilarious audacity of its narrative techniques“.

“This is a metaphysical thriller, an afterlife noir that dissolves the boundaries not just of different genres, but of life and death, body and spirit, east and west. It is an entirely serious philosophical romp that takes the reader to ‘the world’s dark heart’ – the murderous horrors of civil war Sri Lanka. And once there, the reader also discovers the tenderness and beauty, the love and loyalty, and the pursuit of an ideal that justify every human life.”

The Booker Prize, founded in the UK in 1969, is an annual literary award for a single work of fiction written in English and published in the UK and Ireland. The winner receives £50,000 in prize money, with each of the other shortlisted authors taking home £2,500.

The other shortlisted titles in 2022 were:

You can purchase The Seven Moons of Maali Almeida and all of the shortlisted titles from Booktopia.

You’ll find a reading from The Seven Moons of Maali Almeida by Prasanna Puwanarajah below.