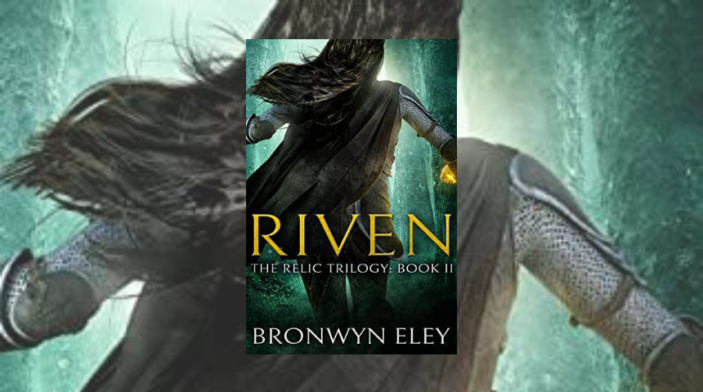 With Lord Rennard dead, Kaylan is on the run. Bound to a powerful Relic she has little control over, she’s headed for Stynos, the one place she might find an ally, and someone who can help her manage this dark and dangerous power. But with Edriast guards on her tail, restless rebels watching from the sidelines, and Kaylan herself growing worryingly attached to her magic, the journey will be far from easy.

Riven picks up exactly where the first in YA fantasy series Relic, left off, barrelling along at the same merry pace that made the final act of its predecessor so exciting. With new places to explore, and plenty of twists and turns, it’s an exciting and well-paced follow up, managing to avoid some of the stilted writing that occasionally slowed the first book down.

Once again, blacksmith-turned-powerful-magic-wielder Kaylan shines. She’s fleshed out magnificently throughout. This time battling a growing addiction to her newfound, though ill-gotten, power. A reluctant heroine to the last, Kaylan’s focus is solely on keeping what remains of her family safe, and her resistance to, well, resistance, makes for interesting reading. To Kaylan, there’s little to separate the rebels her brother reveres and the brutal regime she unintentionally ended in Edriast – she’d sooner be back in her smithy, left alone to earn an honest wage.

New characters abound, including potential ally Lord Edun Stynes and the elusive Bellamy, who had remained a shadowy figure on the fringes of Relic. They’re welcome additions, and roguish merchant sailor Rourke is a particular joy, bringing a little friendly light to Kaylan’s difficult, lonely life.

Capitalising on the solid world-building of the first book, author Bronwyn Eley is freer than ever to play around with her material. The end result is a more than worthy follow-up to Relic, marking Riven as another welcome addition to the world of Aussie YA.