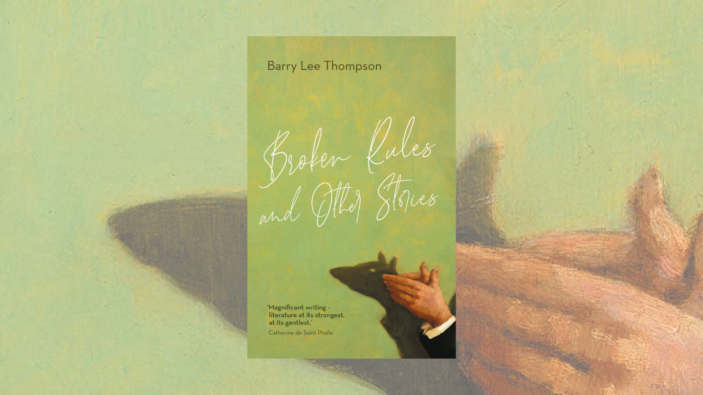 There’s a lot of subtlety to Barry Lee Thompson‘s short story collection, Broken Rules and Other Stories. It’s clear from the first story that this collection is incredibly literary. Most of the stories have their action take place in a character’s mind and draw tension from a close examination of the social contracts that govern the behaviour of the characters. Dialogue with double meanings, and flashbacks to integral moments in the young male protagonists’ lives recur throughout the book, giving the same sort of impression left by arthouse films and art exhibitions.

These are not stories that you can expect to fly though. Rather, the meaning of each can only be drawn out through close reading. To truly appreciate some of Thompson’s points, you may have to re-read certain sections, or even the collection as a whole.

In theory, the stories that make up Broken Rules and Other Stories are interconnected, but aside from the fact that they are all very similar in tone and themes, this is not always apparent. For example, in the story “It was called Cassidy’s”, the protagonist’s name – Steven – is not mentioned for seven pages. It is only at that point that you realise there is a link to the opening story of the collection, called “Their Cruel Routines”.

In fact, I wondered at times whether the interconnected element of the stories needed to be mentioned at all. The pieces already tie together well thematically and explore disenfranchisement, masculinity and sexuality in great detail. These sometimes slow and ponderous stories contain a number of beautiful phrases and descriptions, and a lot of attention has been paid to character. But, their pacing and absence of a traditional plot can make them difficult to immerse yourself in at first.

A highlight of the collection is the story “The Americans”, which was reminiscent in style to the American classic writers of the mid 1950s. The evocative setting of this story, in particular, was easy to picture. Unfortunately, some other stories failed to leave as much of an impression of place. The blurb states that the collection is set between England and Australia, but aside from the British seaside in “The Americans”, setting does not seem to play as big a role in the stories. What does play a large role is psychology. This is a very introspective collection, which may not be for everyone – though it’s clear to see why his work is so widely published and celebrated.

Barry Lee Thompson’s Broken Rules and Other Stories is out now, from Transit Lounge Publishing. Get yourself a copy from Booktopia HERE.