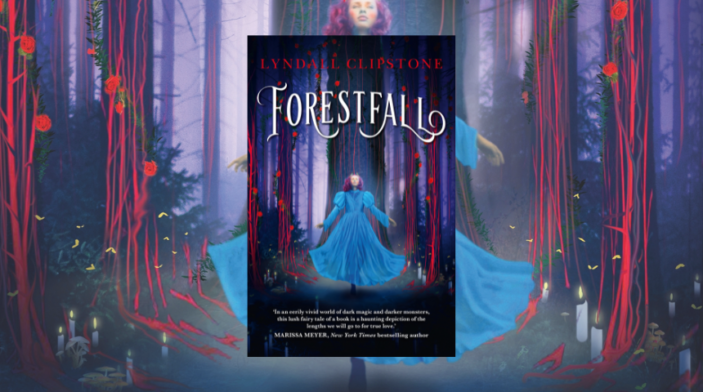 The curse on Lakesedge and its young lord has been lifted. But it has come at a great cost.

Leta, desperate to save the boy she loves, has made a deal with the Lord Under. Sacrificing herself to mend the Corruption that has ravaged Lakesedge, she is damned to walk the world Below. Yet her ties to Rowan remain stubbornly strong, and she is convinced that, despite what the Lord Under says, there has to be a way to return home to Lakesedge. And she’ll stop at nothing to uncover it.

Closing out Lyndall Clipstone‘s lush gothic duology, Forestfall picks up just where moody YA fantasy Lakesedge (you can read our review here) left off. Dividing its time between Leta’s explorations of the land of the dead and Rowan’s increasingly dangerous attempts to bring her back to the land of the living, it’s every bit as committed to its genre as its predecessor. With such a solid foundation laid by Lakesedge, sequel Forestfall, happily, rarely misses.

The story itself is a delightfully twisty affair, with Rowan’s singular mission occasionally at odds with Leta’s discoveries. The truth of the world Below and the power she has there is revealed bit by bit; and her interactions with the Lord Under are revealing, frustrating, and, often, unexpectedly heartfelt – for the god of death, at least.

With the rest of the squad – alchemist Clover, Leta’s brother Arien, mother figure Florence, and the inventive Thea – rather sidelined by our star-crossed lovers, fans hoping for more from Lakesedge‘s strong supporting cast might be a little disappointed. But it’s a minor gripe in a series that was really always about Leta and Rowan, and the lengths people will go to for love.

Forestfall‘s strength lies, ultimately, in the changing question at its core – can Leta return home? Should she? And, most crucially of all, does she want to?

Dripping with the same dark, brooding, and absolutely delicious atmosphere as the series opener, it’s another home run for Clipstone. And while Leta and Rowan’s story may have drawn to a close, one certainly hopes there’s room for more in this wonderfully crafted world.

Forestfall by Lyndall Clipstone is out now, available through Pan Macmillan. Grab yourself a copy from Booktopia HERE